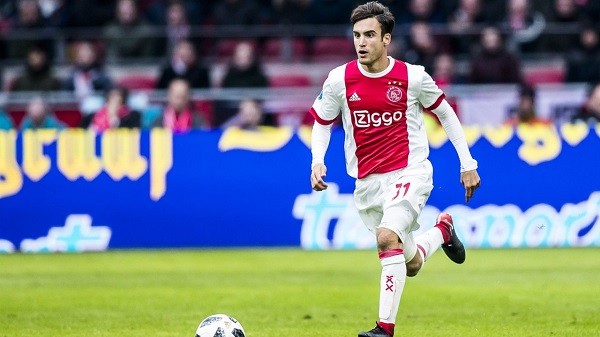 Tottenham are interested in signing the Ajax left back Nicolas Tagliafico.

The Sun claims that the Londoners would like to sign the exciting defender this summer along with Arsenal and Barcelona.

The Premier League side have scouted the defender multiple times this season.

Pochettino has the likes of Rose and Davies at his disposal but both players have underperformed this season.

Replacing them might be a good thing to do this summer. Tagliafico has made a name for himself with Ajax and he has impressed in the Champions League as well.

According to Sun’s report, Ajax are ready to cash in on him if their demands are met.

Tagliafico might be tempted to play in the Premier League. Also, the chance to work with an exciting manager like Pochettino will be tough to turn down.

Tottenham fans have taken to Twitter to share their thoughts on their defensive target. Here are some of the fan reactions from earlier.

A Poch-type player. No doubt. Would fit in perfectly.

Yes… This would be exciting player to have at the squad. Potch would work wonders again… But I think 15mil is cheap! I would expect 25-30mill… Ajax are going to be dismantled this summer at this rate… De Jong, DE Leigt etc. We were linked with keeper as well!

No chance of getting him for 15m. After the season he’s had we’ll need to offer closer to 40.

Double the transfer fee and we can dream.