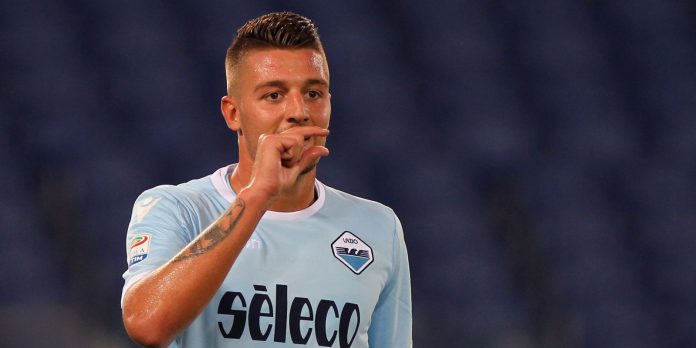 Tottenham Hotspur are interested in the services of Lazio midfielder Sergej Milinkovic-Savic, according to the Daily Mirror, and the London club, alongside Liverpool and Manchester City, sent scouts to watch him in action last Sunday.

The 23-year-old scored a goal and assisted another in the 4-1 win over Genoa to show exactly why he has always been linked with a big move to the Premier League in recent transfer windows.

Milinkovic-Savic bagged a whopping 14 goals across all competitions for the Serie A club last season and also impressed at the World Cup in Russia, prompting Lazio to slap £100million on his head during the summer.

Tottenham face stiff competition for the signature of the Serbia international, and considering how much suitors will have to bring to the negotiations table to have the slightest chance of landing him, Mauricio Pochettino’s side, notorious for their unwillingness to splash the cash, can’t be considered as strong challengers in the race.

Despite Spurs’ star-studded midfield, they surely can do with a player of Milinkovic-Savic’s calibre who will help add more goals to the side.

The Serbian powerhouse plays perfectly as a box-to-box midfielder, and Tottenham need that extra bite and verve in their ranks in order to become a stronger title-challenging side going forward.

However, it remains to be seen if Chairman Daniel Levy will ever think of breaking the bank to land Milinkovic-Savic, and here is how some Tottenham fans reacted to the transfer rumours linking them to the star midfielder on Twitter.

#thfc were present at Lazio versus Genoa last week to watch Sergej Milinkovic-Savic and are now considering a bid for the midfielder. [Daily Mirror] pic.twitter.com/1mgM5yv7d0

Too good to be true

“Now considering” in Spursy language means the same as the other 137 players Spurs were considering an offer for during the summer!!

SMS is valued by Lazio mad President Lotito… I don’t think spurs can pay that for a player.

Would be lovely but CM is our main concern right now.