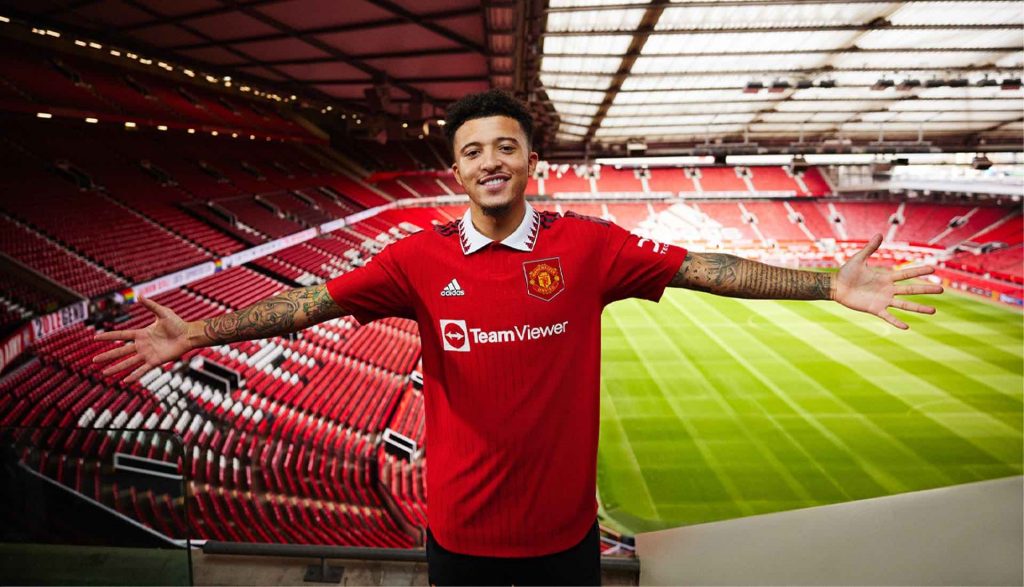 Manchester United’s brand new home kit for the 2022/23 season has been unveiled by Adidas and we’re taking a look at the Red Devils’ ten best kits of the Premier League era. 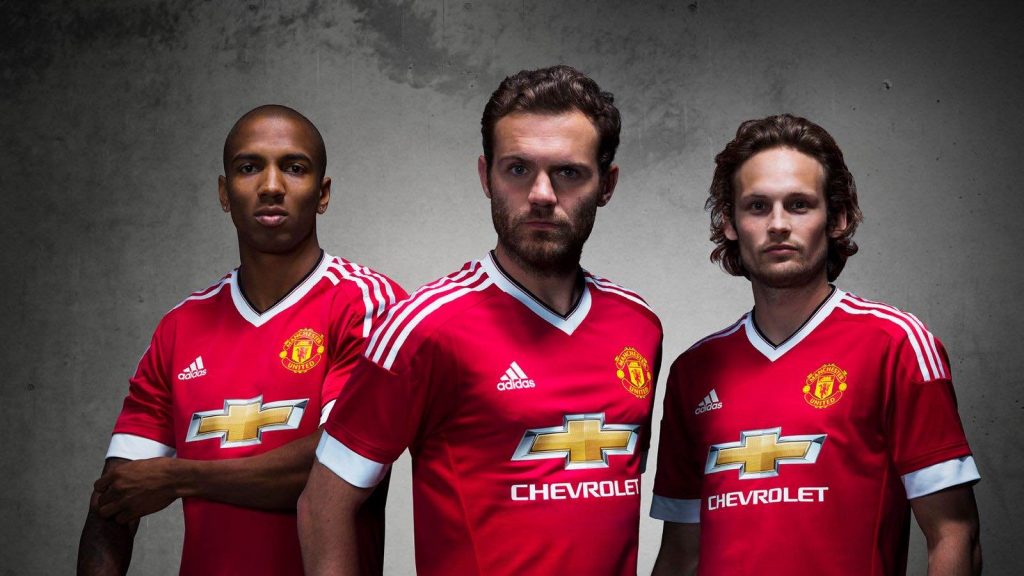 Not a bad kit to start us off and United’s season was hugely successful towards the end (compared to nowadays).

This ended Manchester United’s partnership with Nike for the first time in 13 years, as the Red Devils made the switch to Adidas on a 10-year contract until 2025.

The deal earned United over £750m in revenue and has paved the way for one of the must successful merchandise partners in sport over the course of the duration.

The Reds were back in Adidas jerseys for the first time since 1992 after a deal had been in place from 1980, and started off their maiden game in the new era with a 1-0 win at home to Tottenham Hotspur in the league.

Despite a difficult season under Louis van Gaal with quite a lot of ‘Attack! Attack! Attack’ coming from the Stretford End every afternoon, United managed to win the FA Cup in the end before van Gaal was abruptly sacked.

Iconic kit with some iconic faces – Daley Blind, Memphis Depay, and Ander Herrera come to mind. Players that United could really do with in today’s age under Erik ten Hag. 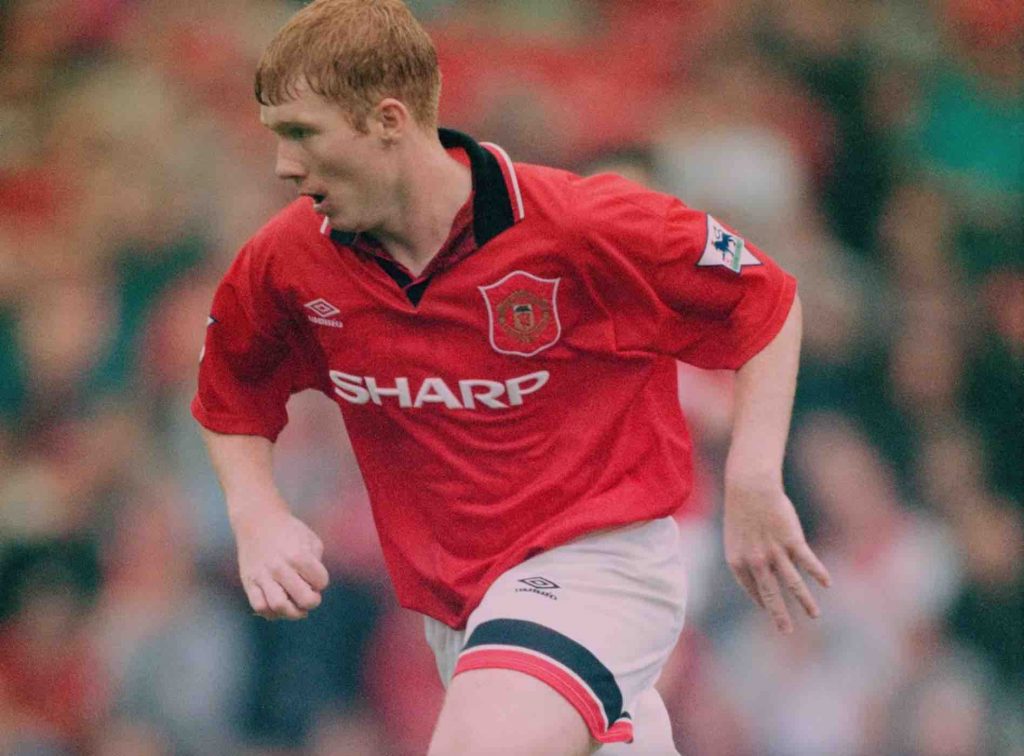 The 1994/95 season wasn’t ideal for Manchester United, who went out in the group stages of the Champions League, were knocked out in both cups before the final, finished second in the league, and won the Charity Shield. Sir Alex Ferguson’s teams usually do a bit better than that.

This was the same season of Cantona’s famous kung-fu kick on a Crystal Palace supporter at Selhurst Park, which earned him a £20,000 fine from the club and would not play for the rest of the season, alongside being banned for eight months.

United lost the title race on the final day which what should’ve been a tenth league title after they drew to West Ham United, even though eventual winners Blackburn Rovers lost to Liverpool.

The following campaign was much more like Manchester United’s usual style.

United did the double, winning the Premier League and the FA Cup, and became the first English side to win it twice. Before the start of the season, the club sold the likes of Paul Ince, Andrei Kanchelsksis, and Mark Hughes whilst not bringing in any marquee signings.

Cantona scored the winner in the FA Cup final against Liverpool and finished as United’s top scorer with 19 goals in all competitions and we saw the breakthrough of Nicky Butt, David Beckham, Paul Scholes, and the Neville brothers. 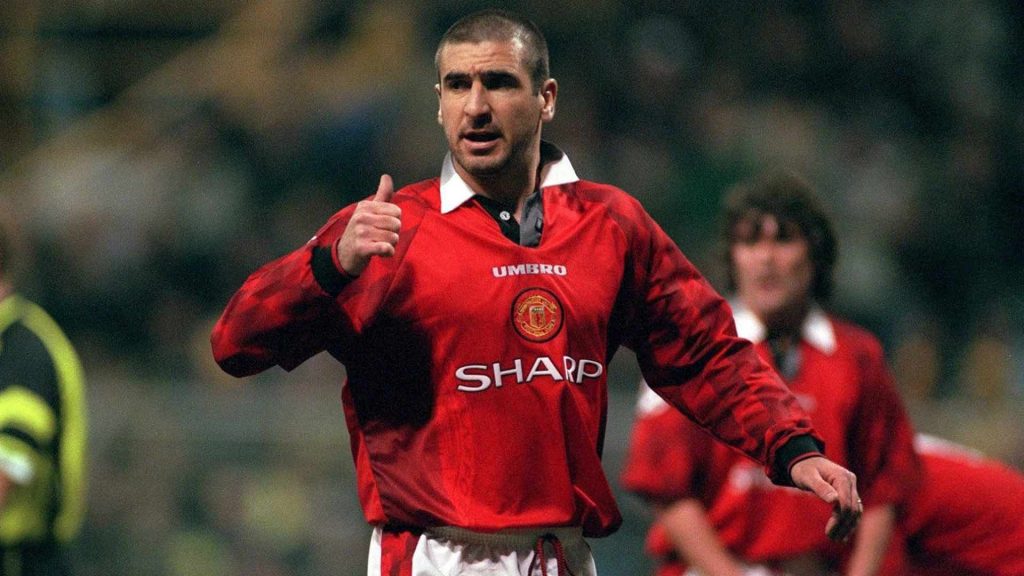 In 1996/97, United won the Premier League and the Charity Shield whilst losing in the Champions League final against Borussia Dortmund.

This was Ole Gunnar Solskjaer’s first season as a Red Devil, and David Beckham won the PFA’s Young Player of the Year award alongside making his first appearance as an England international.

At the end of the season, Cantona shockingly announced his retirement which resulted in the purchase of Teddy Sheringham from Spurs on a £3.5m deal.

1997/98 was quite the disaster. United were pipped to the league title by Arsenal, were eliminated in the FA Cup in the fifth round, lost in the league cup’s third round, and fell to AS Monaco in the Champions League quarter-finals.

Andy Cole scored 25 goals in all competitions but Eric the King’s impact was dearly missed. Roy Keane became United captain though – every cloud. 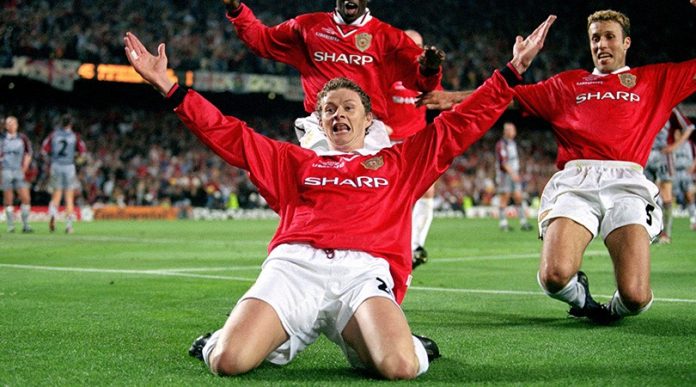 United had a brand new home kit that would be worn exclusively in Europe, which had Champions League starball patterns in the fabric after Reds sponsor Umbro became the official sportswear supplier for the competition.

Many iconic goals were scored in this kit such as Solskjaer and Sheringham in the Champions League final against Bayern Munich.

Widely regarded as one of the greatest sides of all time in 1998/99, United came back from 3-1 down on aggregate in the second leg of their Champions League semi-final against Juventus away from home in an inspiring captain’s performance Roy Keane only for the Irishman to be booked in the process and miss the final. 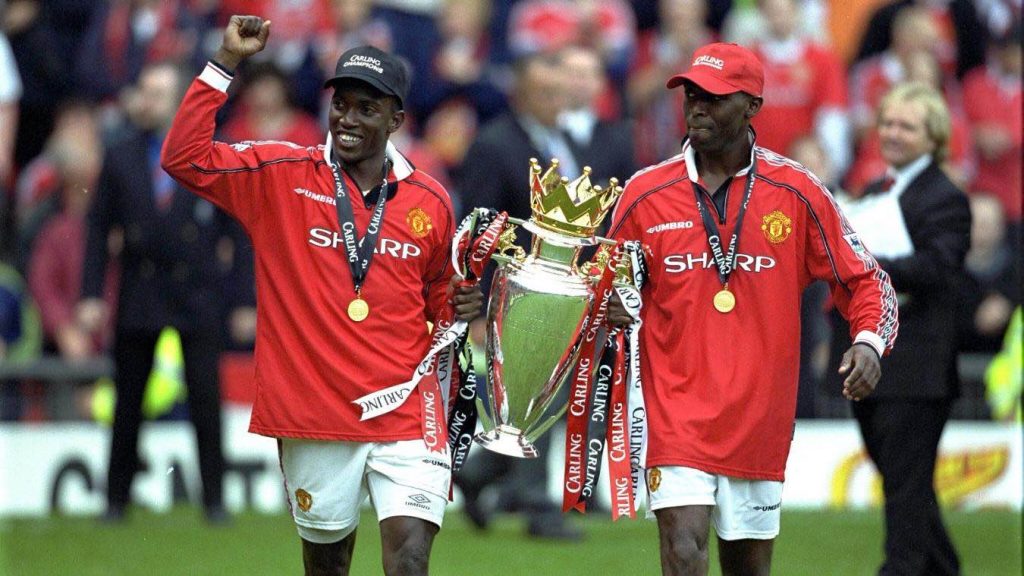 In 1998/99, Manchester United won the first treble in English footballing history. The Premier League, the FA Cup, and the Champions League in the same season.

Sir Alex Ferguson’s army lost only five times throughout their triumphant domestic campaign (three league losses) with just one loss at home against Middlesbrough in December.

United had a 33-game unbeaten run in all competitions which began on Boxing Day in 1998, and the season was one of Sir Alex Ferguson’s finest moments as Old Trafford boss.

The club was almost taken over in a £600m deal by Sky in the early parts of the campaign, which was eventually blocked by the Monopolies and Mergers Commission in March 1999.

David Beckham was the UEFA Club Footballer if the Year and was runner-up to Brazilian midfielder Rivaldo for both the Ballon d’Or and FIFA World Player of the Year awards.

In November 1999, Sir Alex Ferguson was awarded a knighthood. 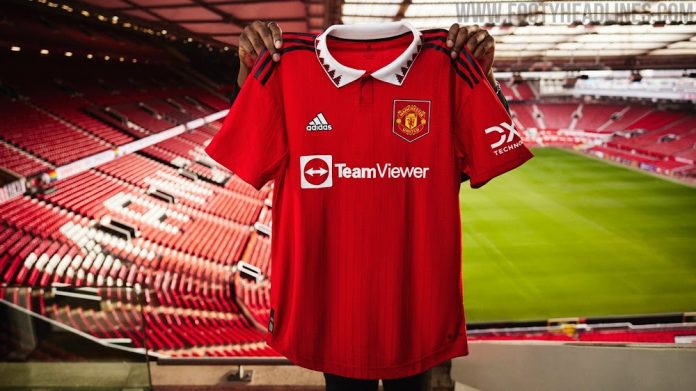 A new kit marks a new era for the club under Erik ten Hag, and the expected closing of the Cristiano Ronaldo chapter in his second spell at Manchester United.

Inspired by the famous designs from the 90s, the ‘Cantona collar’ is finally back at Old Trafford but we may not see one of the club’s greatest ever players line up in it before the Premier League debuts in August.

United have already completed the signing of Tyrell Malacia from Feyenoord, and are exploring deals for talents such as Barcelona’s Frenkie de Jong, and Ajax duo Lisandro Martinez and Antony. 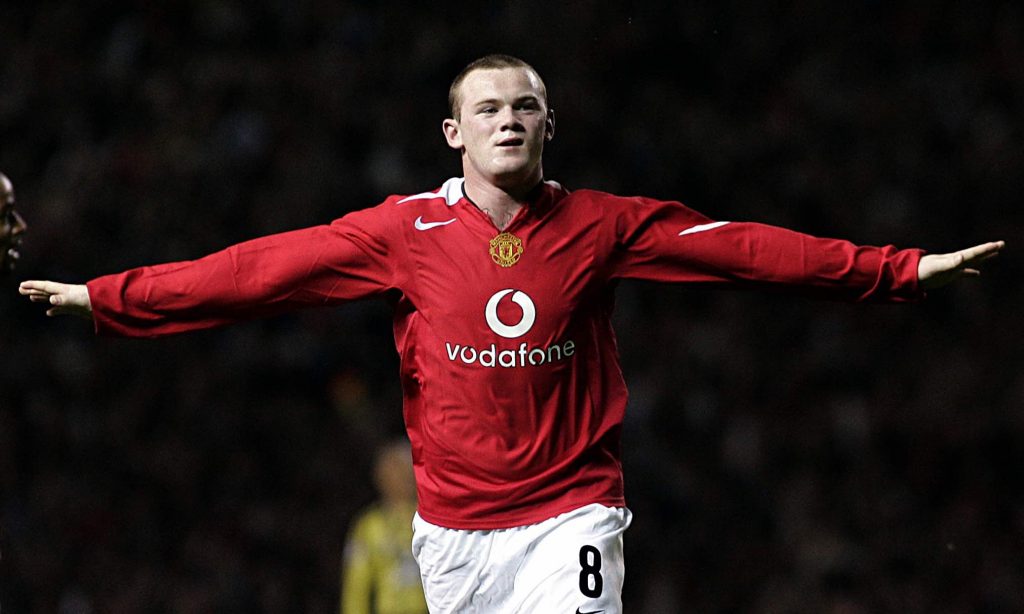 The 2004/05 season was disappointing in the eyes of Manchester United and new recruit Wayne Rooney who scored 17 goals in all competitions to lead the team in his debut year at the club. A then-19-year-old Rooney won the PFA Young Player of the Year award which marked the beginning of a historic career.

In 2005/06, it was another disappointing season but winning the League Cup was a positive note despite the Reds finishing 2nd in the league table and being knocked out in the early stages of both the Champions League and the FA Cup.

Roy Keane departed the club at the end of the season, and Gary Neville became Manchester United captain for the first time. 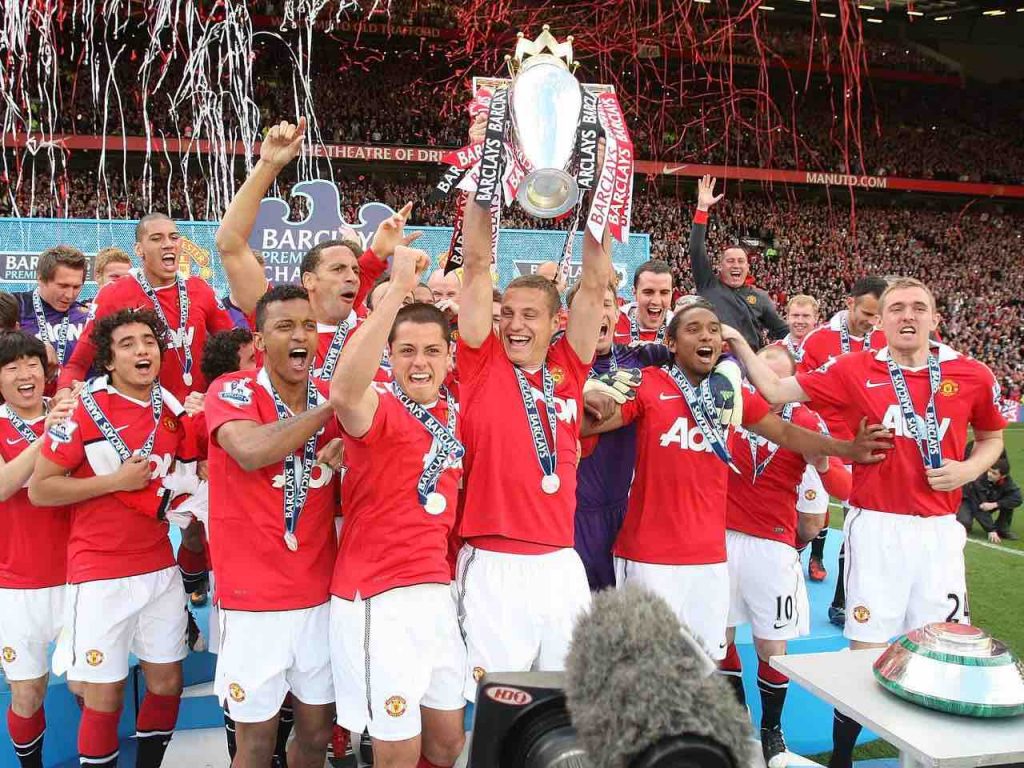 The 2010/11 season was a typical bounce back from United, and they had just the kit to match after losing out in the Premier League to Chelsea the season prior.

Sir Alex Ferguson’s side won the league and the Charity Shield, as well as finishing in runner-up the Champions League to Barcelona, and losing to Manchester City in the FA Cup semi-final.

Beating Chelsea in the Champions League quarter-final and shoving aside a highly-rated Schalke side on the way to the final, it felt like destiny for Manchester United to win their fourth European Cup. Unfortunately, Barcelona had other plans and Lionel Messi, Pedro, and David Villa spoiled the Red party.

United were also agonisingly knocked out of the FA Cup semi-final against Manchester City after a long-range strike from Yaya Toure sealed a win for the noisy neighbours.

Many iconic players and cult heroes are remembered from this squad including Anderson, Dimitar Berbatov, Ji-sung Park, Javier Hernandes, Nani, Pogba, and the Brazilian twins Fabio and Rafael. 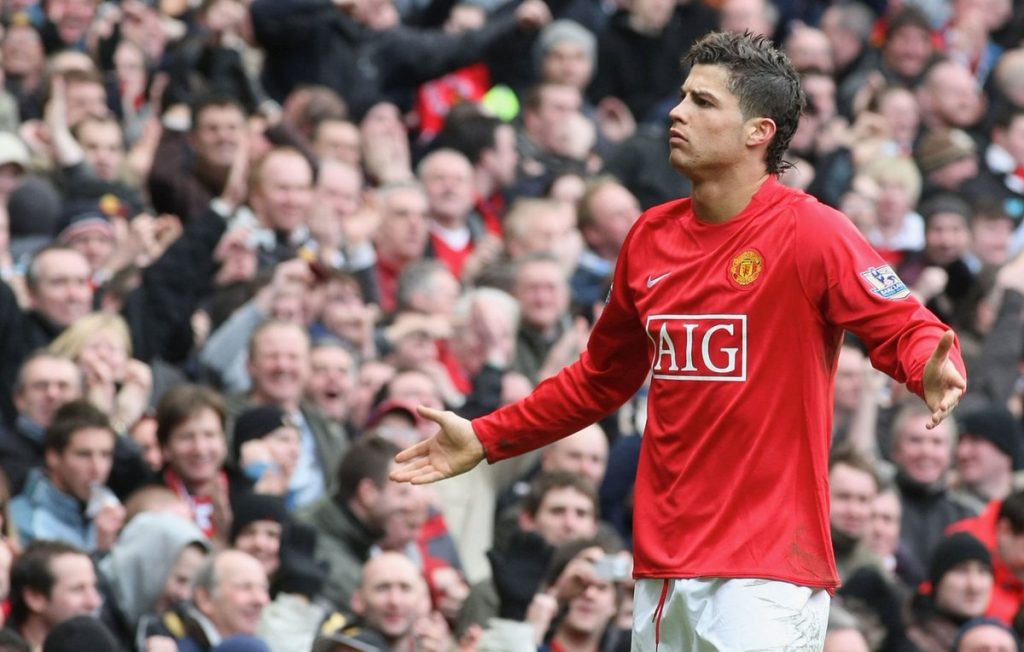 United fans couldn’t have asked for a better kit to match Cristiano Ronaldo’s final two seasons at Manchester United before his world-record fee transfer to Real Madrid in the summer of 2009.

In the 2007/08 season, United won both the Premier League and the Champions League in what his widely known as one of the most elite sides to have graced the sport. Beating out Chelsea to both the league and the European cup, the West London club were firmly put in their place.

Ronaldo picked up six individual awards at the end of the season including the Premier League’s Golden Boot after scoring 31 goals in the campaign as well as the Ballon d’Or and PFA Player of the Year.

In 2008/09, United retained their Premier League crown and won the League Cup, Charity Shield, and Club World Cup but it was disappointment in the end after a semi-final exit to Everton and a Champions League final defeat to Barcelona. 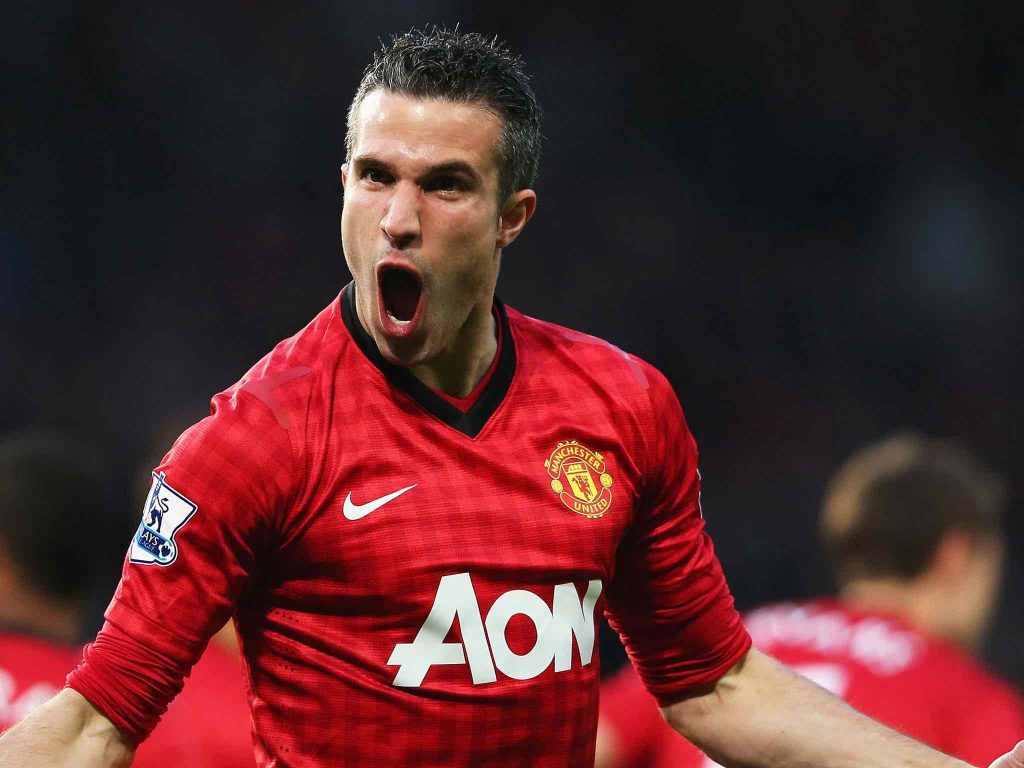 There was no better way to close out Sir Alex Ferguson’s era at Manchester United as the Scotsman retired from management in football.

The 2012/13 season had everything. A triumphant Premier League campaign led by new signing Robin van Persie from Arsenal with a 5-5 draw on the final day, to refereeing drama leading to an early exit in the Champions League, to disappointing cup defeats also.

In Sir Alex Ferguson’s United era he won 38 trophies, more than any other manager in the history of the game – aged 71 at the end of his final season.

Cult heroes of this season include Jonny Evans who seemed to pop up with a goal just when United needed one, Antonio Valencia, and Anders Lindegaard who once rivalled David de Gea for the number one spot at Old Trafford.

The final season of satisfaction that Manchester United have had in almost ten years of unsatisfactory results since Ferguson’s retirement.