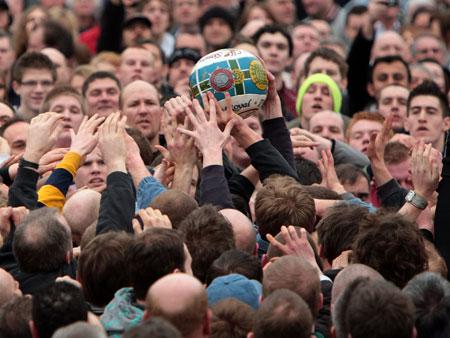 If you turn up in Ashbourne on Tuesday 12th or Wednesday 13th February you could be forgiven for thinking that Civil War has broken out. In fact there is nothing to worry about, just a game of football.

Every year the town of Ashbourne stages a game of football unlike anything else you have ever seen. Always on Shrove Tuesday / Ash Wednesday,
the Royal Ashbourne Shrovetide Football game has been played for centuries, with the earliest reference being in a poem by Charles Cotton in 1683. There have only been two cancellations, both due to a nationwide outbreak of foot and mouth. The game even continued through both world wars as insisted upon by the men who were fighting in them. This is what they were fighting for, to keep great traditions like Shrovetide Football alive.

Unlike a conventional game of football the two teams number in their hundreds and the game is played over two eight hour periods. The goals are 3 miles apart but unlike any football goal used in the modern game. These were originally mill stones situated at two local mills, Sturston and Clifton. These mill stones have now been replaced by purpose built structures. A goal is scored by tapping the ball three times against these structures. The goal scorer is carried back in to the town by their team members with hundreds of spectators cheering.

As you would suspect there are very few rules, but amongst them are, committing murder or manslaughter is prohibited, unnecessary violence is frowned upon, the ball must not be transported in a motorized vehicle and the ball may not be hidden in a coat or bag. Shops and banks board up their fronts and cars are parked out of sight as the game takes to the streets.

The game starts each day at 2pm from the Shaw Croft car park when the ball is ‘turned up’. Two people are given the Shrovetide Honour of throwing the ball into the crowd. In 2003 this honour was given to HRH Price Charles.

The ball is larger than a conventional football and is rarely kicked. The hand sewn leather balls are made by Ashbourne local, John Harrison. They are cork filled to help them float when they land in the River Henmore. The balls are quite a work of art and are painted in a design relevant to the person ‘turning up’ the ball. If the ball is goaled then the goal scorer keeps the ball otherwise the person named on the ball keeps it.