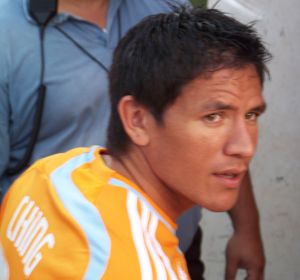 As the World Cup approaches, Americans have reason to be nervous.

I could tell you why in a few short sentences, but I have opted instead for a hypothetical, reverse-chronological narrative that reads like an episode of Lost.

It’s just before 6 a.m. in California.  I should be groggy at this early hour, but I’ve been awake most of the night.  The truth is, I haven’t slept well in days.

After a narrow loss to England and a disappointing draw with Slovenia, the U.S. Men’s National Team (US MNT) faces a must-win match against Algeria to have a chance at advancing to the knockout round.  What’s worse is that we have lost key players to injury and suspension.

It is the nightmare that we thought to be no longer possible.  We have already equaled our 2006 showing, having taken a point from the Slovenians, but our expectations were so much higher – perhaps unreasonably so.

With the coffee brewing, I turn on the television and flip open my MacBook.  Who will Bob Bradley select to start this critical tie?  Who will stretch the Algerians and fight to the final whistle?  Who will spearhead our attack?

I scan the lineup and see many familiar faces – a capable midfield sandwiched between a leaky backline and an unpredictable, ever-changing attack.  And then, I see it.

I check my email over breakfast.  My friend Victor sent me an email late last night.  It is entitled, “Ching!?!?”  My stomach churns as I read it.

“The fact that Bradley selected Ching tells me there was no one else.  He is a filler at best.  He’s the guy you and three buddies call when you want to have a poker night and no one else can make it.  You just need someone – anyone – to sit at the table.  That said, there is someone else. There has to be.  I’d rather have a no-name forward from the under-20 squad than Ching because I would have hope – hope in the unknown.  Oh well, at least he will make watching games in Spanish a lot more fun.”

It’s late-morning on the West Coast and I am perusing the latest soccer news in between meetings.  The discussion in recent weeks has centered on Charlie Davies, whose rapid recovery from multiple fractures to his leg, elbow and face surprised everyone.

Having made two appearances as a substitute for FC Sochaux, the American striker’s return to action presents Bob Bradley with a precarious choice.  Does he take Davies to South Africa? Granted, the 23 year-old played a key role in the US MNT’s stunning Confederations Cup performance the previous summer.  However, he is at least a few weeks from being match fit and there is no guarantee that his form will ever be as good as it once was.

Suddenly, I see the headline.  “U.S. World Cup Roster Set.”  Nervous, I click on the link.

Jozy Altidore.  Not surprisingly, Bradley selects Davies as well.  The third choice would have shocked people a few months ago, but, after an impressive spell at Aris Thessaloniki, Eddie Johnson became a much more attractive choice than the alternatives.

Finally, as I suspected, Bradley could not resist.  The fourth slot was reserved for a familiar face.  He was on the 2006 World Cup roster, but didn’t make a single appearance.  He has had a good career in Major League Soccer, but never played abroad.  Regardless of the fixture, his inclusion seems to turn on which tall, slow forward appears to be in better form.  Ultimately, he offers nothing more and nothing less than Conor Casey and Kenny Cooper, yet Bradley’s man-crush just won’t go away.

I read that Sacha Kljestan, the inconsistent American midfielder who is still praying for selection, thinks that there is someone on the US MNT that makes everyone around him better.

“He must be talking about Landon Donovan.” I mutter.  “It could be Charlie Davies too.”

The US MNT played a friendly match against El Salvador the previous night.  Even though the Americans fielded a reserve squad, commentators couldn’t resist speculating as to whose stock was rising and whose was falling.  It was expected – considering the uncertainty surrounding Charlie Davies’ health and a slough of other injured players – that pundits would ponder such things.

According to them, one person in particular stood out from the rest.

It was a player who has scored only eight times for the US MNT in competitive matches dating back to 2003.  Who were the teams who fell victim to a forward lacking speed, agility, creativity, vision and positioning?  Jamaica, El Salvador, Trinidad and Tobago, Barbados, Cuba, and Honduras – not exactly the most difficult teams to crack.

So when well known soccer commentators use words like “awesome” to describe his performances, I wonder whether they are really paying attention.  This is a forward without the instincts and experience to be considered a dangerous poacher.  He appears to get in the way of quicker, more creative teammates, which breaks down attack after attack.  He is the same guy that Kljestan thinks makes everyone around him better.