If Los Angeles Galaxy supporters needed an extra confidence boost ahead of Sunday’s MLS Cup final against the Houston Dynamo, here’s an interesting tidbit, which ESPN analysts happened to mention before I could:

At both of David Beckham’s previous permanent homes, Manchester United and Real Madrid, he won a league title in his last season.

Given that Sunday will more than likely mark the end of Becks’ stay with the Galaxy and in MLS, and that the Galaxy are favored to claim the crown, it’s a piece of information that merits a mention. It would be quite fitting for him to mark his final MLS campaign, and his best one at that, by continuing that trend and help lead the Galaxy to their first title since 2005, wouldn’t it?

Of course, even if the Galaxy are tangling for the title in the very, very friendly confines of their very own Home Depot Center, it’s premature to put their name on the trophy already, as the Dynamo, even without their biggest threat, will be raring and ready to upset the odds and end their own title drought. 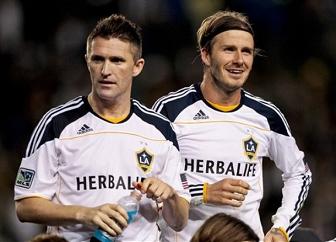 The Galaxy are making a record seventh MLS Cup final appearance, with their most recent appearance coming in 2009, when they lost to Real Salt Lake on penalties. A win would give them their third title, following their triumphs in 2002 and 2005. On both of those occasions, they outlasted the New England Revolution 1-0 in extra time.

As for the Dynamo, this is their third MLS Cup final appearance, and they’re looking to make it three wins in three trips, following up on their wins over New England (always a bridesmaid…) in 2006 and 2007.

After a disappointing 2010 season in which they missed the post-season for the first time in their history, the Dynamo made the move from the Western Conference to the Eastern Conference to accommodate the expansion Vancouver Whitecaps, and it’s a move that paid immediate dividends for the Dynamo.

When you look at LA’s squad, it’s hard for three names not to stick out, given that they’re three of the most well-known and gifted talents currently playing in MLS.

Beckham, Landon Donovan, and August acquisition Robbie Keane are certainly key to the Galaxy’s run to this point and will be once again on Sunday.

Becks notched 15 assists in 26 appearances in the regular season, and he’s picked up an assist in each of the Galaxy’s three playoff matches. Donovan has been ever-present this season as well, scoring from the spot in the last two matches after finding the target a dozen times in the regular season. And Keane, who was sidelined by an adductor injury for a few weeks in October, was the best player on the pitch in the Western Conference final, as he scored once and should have had a few more with it.

But you can only accomplish so much without the right supporting cast, and the most notable member of the Galaxy’s supporting cast is forward Mike Magee. It might be easy to lose track of Magee with other threats to tend to, but he’s shown in the playoffs that he should be far from an afterthought, as he’s been on the receiving end of each of Beckham’s three playoff assists.

And as formidable as they might be expected to be in attack, the Galaxy posted the league’s best defensive record in the regular season. They allowed only 28 goals in 34 matches, which made them the only team in the league to allow an average of less than one goal per game. Their tightness is at the back is thanks in no small part to having continuity at the back, with the quartet of Todd Dunivant, Sean Franklin, Omar Gonzalez, and A.J. DeLaGarza all with more than 30 appearances this season.

Even the best back line is prone to the occasional error, so the keeper has to be counted on to step up in crunch time as well, and Josh Saunders is coming off of a fantastic performance against Real Salt Lake. Josh Saunders stepped in when Donovan Ricketts was injured against San Jose in June, and he kept his place in the starting XI even after the Jamaican, who had been L.A.’s #1 keeper for two-plus seasons and was named the top keeper in MLS just last season, returned to fitness.

There is some bad news on the injury front, however. Striker Chad Barrett, who has seven goals and five assists this season, will miss the final after dislocating his right ankle in training last Thursday. With Barrett out, Bruce Arena will likely partner Keane with Adam Cristman, who scored one goal in 11 appearances in the regular season.

While LA are dealing with the loss of a key starter, Houston head into the final with a much more significant injury blow.

Brad Davis was Houston’s top creative force this season, notching four goals and a league-leading 16 assists in the regular season and picking up an assist in each leg of the East semi against Philadelphia. However, he suffered a torn quadriceps in the first half of the East final and won’t be on the pitch against the Galaxy.

That’s big, big blow for Houston’s chances, but to write them off would be a mistake.

While there aren’t the same marquee names on the Dynamo’s roster as there are on L.A.’s, this bunch is hot at the right time, and that counts for a lot. Houston lost only twice in their last 13 regular season games, and they finished the regular season an unbeaten 4-2-0 in their last six, including a 3-1 home win over the Galaxy in their regular season finale. They’ve stayed hot in the playoffs, and after winning in Kansas City, they’ll feel confident about their chances of winning in the Galaxy’s home stadium, even without Davis.

Without their star playmaker, Houston will need to stand tall at the back. That’s been a big part of their unbeaten run, as they’ve allowed only six goals in those nine matches and haven’t surrendered more than one in any of the last eight. With the firepower that they have, the Galaxy will have no shortage of chances, but the Dynamo defense must ensure that few of those chances are clear-cut ones, and keeper Tally Hall, who’s wrapping up his first season as a starter, will have to be at his best.

It won’t be easy to keep the Galaxy off of the scoreboard, but they are prone to defensive lapses, and Houston will have to take advantage of those opportunities. Their chances in attack might not be as plentiful without Davis in there, so they’ll have to make the most of the chances they do get.

The Dynamo don’t have the kind of threats that the Galaxy do, but they’ve gotten production from many sources this season. Their leading scorer is Brian Ching, who had five goals in the regular season and has one in the playoffs, but midfielder Geoff Cameron, defender Bobby Boswell, and forward Will Bruin each hit five in the regular season. And in the playoffs, their five goals have been scored by four players, and their top scorer is defender Andrew Hainault, who struck in the away leg against Philadelphia and notched the opener in the East final.

So, this team knows how to get it done, and with an experienced coach in Dominic Kinnear, who led the Dynamo to their back-to-back titles in 2006 and 2007, they’ll undoubtedly be prepared for the challenge that awaits on Sunday. 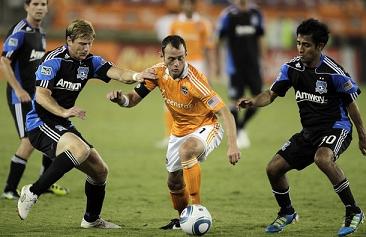 Why Los Angeles will win: They’re the better team, plain and simple, and they’d be favorites even if Houston had Davis’ services.

And though the Dynamo will certainly have their share of supporters in the stands, this does amount to a glorified home game for the Galaxy. That’s something that can’t be discounted, especially considering that they’re unbeaten at the Home Depot Center this season.

And after the disappointments of the last two seasons, they’re not only due, but it looks like it’s all come together this season, both in terms of talent and in terms of intangibles.

Confidence and resiliency can often trump talent, especially when a title is on the line, and even without their best player, Houston will believe they can win. They successfully navigated 50-plus minutes without Davis in a hostile environment in Kansas City, and already knowing that they won’t have him on Sunday means that they’ll have time to prepare mentally and tactically. His loss is a huge blow for the Dynamo, but they’ll be ready.

However, of the six times that the Supporters’ Shield winner has been in the MLS Cup final, they’ve won it five times, with the only loss being Chicago’s 4-2 defeat to San Jose – led by Landon Donovan, with Dominic Kinnear as an assistant coach – in 2003.