Danny Blind………wasn’t he that Dutch bloke with the dodgy perm who brought down Paul Ince for the penalty at Euro 96?

It seems the current AFC Ajax Director of football is remembered more for his resemblance of a Harry Enfield sketch than his playing career.

A complete travesty if you ask me.

The team of the nineties was undoubtedly Ajax Amsterdam. The six year tenure of the then coach Luis Van Gaal, brought the most complete football team I had ever seen.

The Dutch masters boasted names such as Rijkaard, Davids, Litmanen, the De Boar twins, Kluviert, Overmars and played the game in text book fashion. The success of Ajax was most notable during the 1994/1995 season where they claimed the Dutch League Championship and European Cup, going unbeaten throughout in both competitions.

The Captain and lynchpin of this team? It was that bloke with the dodgy perm who brought down Paul Ince for the penalty at Euro 96.

Danny Blind began his professional football career with Sparta Rotterdam and made 165 appearances for the club over a seven year spell.

Following the 1985/1986 season, the then Dutch champions PSV Eindhoven managed to lure the unsettled and out of contract Ajax defender Ronald Koeman to the club. Koeman, an established International at the time. left a gapping hole in the Amsterdam clubs backline with the move.

This void was to be filled by the relatively unknown Sparta Rotterdam defender Danny Blind, much to the anger of the clubs star man and striking legend, Marco Van Basten.

Van Basten was aghast at why the then coach Johan Cruyff had replaced the impressive Koeman with an untried player at the highest level instead of splashing the cash on a big name.

Van Basten didn’t stick around long enough to eat his words as the following season he was signed by Italian giants AC Milan. Blind, signed by Cruyff would become a colossal at Ajax another four managers down the line under the leadership of Van Gaal.

Van Gaal saw in Blind what Cruyff discovered 5 years previous and the new Ajax chief built a side and a legacy around the stylish centre half. 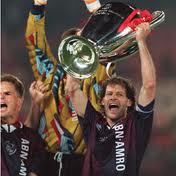 Blind’s passing of a football and calm manner on the field typified the Dutch style. Van Gaal was to install this style in his Ajax team and with the young attacking powers breaking through, Blind became a solid foundation to accommodate the likes of Kluivert. Many trophies followed and many records were broken.

Ajax have since been unable to come anywhere near the success achieved under Van Gaal. Following the European cup success in 1995, Ajax began to decline with the bosman ruling and the eventual manager’s departure.

With a large number of their stars heading to Barcelona, where Van Gaal joined them after his contract in Amsterdam expired, Ajax where left with a shell of the great team that had worn the red and white over the previous six years.

Danny Blind remained at large though, picking up a further league title and two more KNVB cups, never donning the shirt of another team other than his Ajax.

When people look back to remember that great Ajax team of the nineties it is the names of Kluivert, Litmanen and Overmars that immediately spring to mind.

Most people overlook the captain, the man who is still the only Dutchman in history to win all five International club competitions recognised by UEFA and FIFA (European Cup, European Cup Winners Cup, UEFA Cup, Super Cup and Intercontinental Cup), a feat only achieved by four other professionals in the history of the game.

Danny Blind may have been an unknown left back playing for the modest Sparta Rotterdam until the mid eighties but John Cruyff, Ajax’s most famous name, gave him an opportunity and Blind took it, becoming another club legend in the process.

Perm or not this truly was a great footballer. 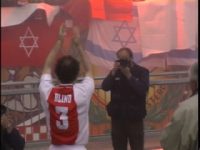 David Cockcroft is a contributor to soccerlens.com and editor of the blog site Silver Fox. (www.silverfox.blog.co.uk). You can follow David Cockcroft on Twitter.