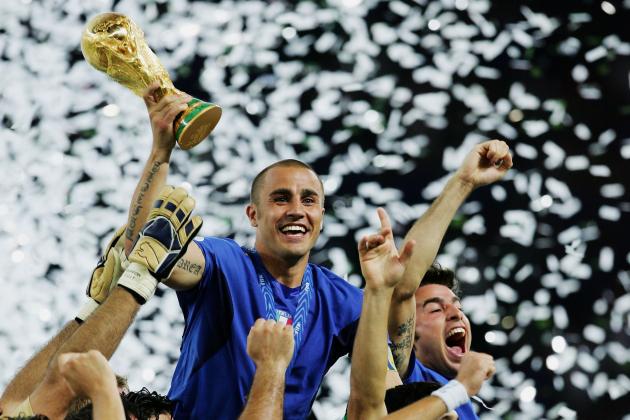 The award of the 2006 World Cup was made in July 2000 and the nations bidding to host the tournament were; Germany, South Africa, England and Morocco, Brazil having withdrawn their bid. After three rounds of voting Germany was awarded the finals, ahead of South Africa. That left 198 national teams from all six populated continents to begin the qualification process in September 2003 which was to end with 31 qualifiers plus the host nation.

The success of the German bid, however, was marred by a hoax bribery affair which even led to calls for a re-vote. The night before the final vote the German satirical magazine Titanic sent letters to FIFA representatives offering joke gifts such as cuckoo clocks and Black Forest ham in exchange for their votes to favour Germany.

Oceania delegate Charles Dempsey, who had initially backed England, was then instructed to support South Africa following England’s elimination. Dempsey abstained citing ‘ intolerable pressure’ on the eve of the vote.

Had Dempsey voted as originally instructed the vote would have tied at 12-12 and FIFA President Sepp Blatter, who favoured South Africa, would have had to cast the deciding vote which would have caused international problems that would still resound today.

Eight nations qualified for the finals for a first time; Angola, the Czech Republic, Ghana, the Ivory Coast, Togo, Ukraine, Trinidad and Tobago along with Serbia and Montenegro. It was to be a momentous occasion for both the Czech Republic and Ukraine who were making their first appearances as independent nations. The 2006 World Cup finals would also make history as the first occasion all six world football confederations were represented at the finals.

There were 12 host stadia but there had to be some nifty rebranding as FIFA rules prohibit sponsorship of a stadium unless those sponsors are also official FIFA sponsors. The Allianz Stadium in Munich, for example, had to be known for the duration of the tournament as FIFA World Cup Stadium Munich. Even the letters ALLIANZ were either removed or covered.

The eight seeded teams in Germany were; Argentina, Brazil, England, France, Germany, Italy, Mexico and Spain and it was Germany who kicked off the finals with a 4-2 victory over Costa Rica which was the highest scoring opening game in FIFA history. The hosts won all three group games to progress with nine points. Ecuador joined them in the next phase. England won Group B and progressed along with runners-up Sweden.

Group C  winners Argentina edged the Netherlands to win the group on goal difference mainly due to a 6-0 hammering of Serbia and Montenegro. When they also lost their last game 3-2 to Ivory Coast it was the last time the team played as Serbia and Montenegro before the two separated.

Portugal won all three games to top Group D with Mexico also progressing in second place and were joined by Italy who won Group E with Ghana being placed second.

Unsurprisingly Brazil finished top of Group F with maximum points but it was Australia who impressed. In their first World Cup finals for 32 years they came from behind to defeat Japan 3-2 and despite losing to Brazil a 2-2 draw with Croatia sent the Socceroos through to the last 16 but that game is best remembered for referee Graham Poll booking the same player three times. Australia made history by becoming the first Oceania team to reach the last 16.

Switzerland topped Group G ahead of France who only progressed by the skin of their teeth. The French went through by virtue of their only group win, 2-0 over Togo. In defeating Togo South Korea, although they went out at the group stage, did so after securing what was their first World Cup finals match outside their own country.

Group H was easily won by free scoring Spain who netted eight times in gaining all nine points. Ukraine, despite losing 4-0 to the Spanish, progressed as runners up by winning their other two games.

In the Round of 16 Germany made light of beating Sweden, 2-0, while Argentine edged Mexico 2-1. Ten man Italy struggled past tenacious Australia 1-0, thanks to a dubious penalty in the dying seconds, while Ukraine beat Switzerland on penalties in a game where the Swiss became the first team in a World Cup to fail to score any of their shoot-out penalties. What made Swiss elimination even harder to swallow or comprehend was the fact that as well as becoming  the only team to be eliminated from a World Cup without conceding a goal but they are the only nation to go through a finals tournament without letting in a single goal.

England beat Ecuador 1-0 with a David Beckham free-kick while Portugal defeated Holland by the same score. That game went down in history with the highest number of yellow cards, 16, nine for Portugal and seven for the Dutch as well as four dismissals for a second booking. Brazil beat Ghana 3-0 and Ronaldo claimed a record 15th World Cup finals goal while the French finally got their act together and surprisingly beat Spain, 3-0. 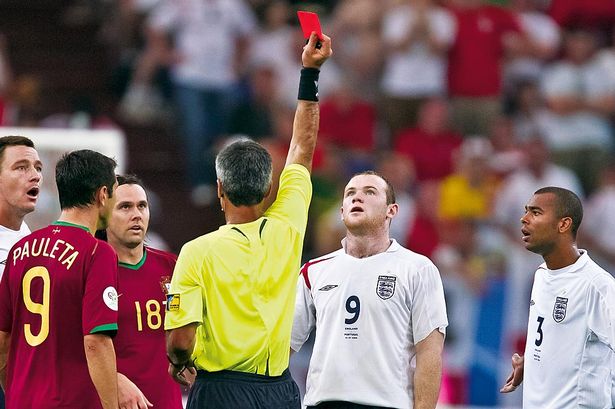 Germany’s momentum saw them beat Argentina in the quarter-finals but only on penalties, 4-2, after a 1-1 draw. It was the first time Argentina lost a World Cup penalty shoot out. Italy ended Ukraine’s adventure with a 3-0 win and England lost on penalties ( there’s a novelty) 3-1 to Portugal, after Wayne Rooney was sent-off. France continued their improvement with a 1-0 win that sent Brazil home.

For only the fourth time ever it was an all European semi-final line up at a World Cup finals. Italy and Germany was scoreless until extra time when a 118th minute Fabio Grosso goal broke the deadlock. Two minutes later Del Piero scored to dump the hosts out their World Cup.

In the second semi final a 1-0 win, due to a Zinedine Zidane penalty, secured France their place in the final.

Germany’s consolation came with a third place finish as they beat Portugal 3-1 in the Third Place play off.

France opened the scoring in the Final when Zidane netted with the most bizarre penalty ever seen in a Final. His seventh minute spot-kick hit the underside of the bar and went into the goal before the ball bounced back up to hit the crossbar before bouncing out of the goal. Materazzi equalised and that was the score at 90 minutes.

Then the Final hinged on two separate incidents, both involving French talisman Zidane. First he saw his header saved by Buffon then he was sent off for head-butting Materazzi in the chest. Over the top play acting by the Italian goal-scorer may have convinced the referee to dismiss the Frenchman  but no further goals sent the Final into a penalty shoot-out which Italy won 5-3 to claim their fourth World Cup title.

David Trezuguet, who had scored France’s Golden Goal against Italy at Euro 2000, was the unfortunate player not to score his penalty. His kick hit the bar, landed on the goal line and then bounced clear.

The 2006 World Cup was one of the most watched events in television history underlining what an important part the media plays in modern football. Over the course of the tournament more than 26 billion non-unique viewers tuned in with the Final alone being watched by more than 715 million people worldwide. The German- hosted tournament ranks fourth in the all-time listing behind the World Cups of 1994, 2002 and 1990.

It came as no surprise that the staging of the World Cup by Germany was an organisational success which was very much due to the committee led by Franz Beckenbauer. Horst R Schmidt who was also on that committee became an advisor to the South Africa World Cup of 2010. The 2006 tournament helped rebrand the newly united nation after a preceding century of conflict and political division. The concept of ‘Fan Fest’ proved a big hit as did public viewing on large screens of the games. It set an innovative precedent that was embraced by all nine host cities on South Africa four years later.

There were a number of tangible benefits to the wider German economy, which is testimony in itself to how good a tournament it was considering the inherent strength of said economy. The city of Cologne recorded a growth in post World Cup visitor numbers of between seven and ten percent.

Italian tourists, for example, flocked to the Berlin Stadium where their team won the trophy. World Cup tourists spent in the region of 500 million Euros while German businesses as a whole grossed approximately two billion Euros from food, beverages and the sale of memorabilia while the cost to an already established infrastructure was around 600 million Euros.

One of the major benefits for the German nation as a whole was that the existing travel infrastructure, in which the government invested 37 billion Euros, was able to cope with the surge of use during the World Cup which augurs well for any potential future bids to host events of a similar size and stature.

Germany’s image around the globe benefitted massively from the 2006 World Cup and retail trade alone; before, during and after the event grossed around 2 billion Euros.

The last word on the premier international football tournament should come from FIFA President Sepp Blatter who declared, “The World Cup in Germany was the best World Cup ever.”