Liverpool Tactical Analysis: Who should Brendan Rodgers play in midfield? 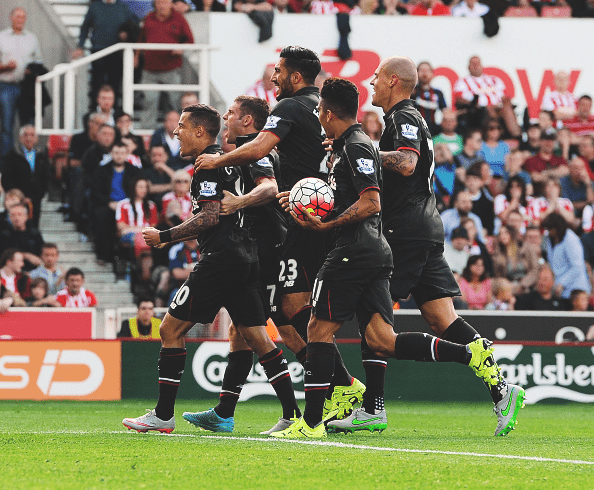 Liverpool and Brendan Rodgers will be breathing a sigh of relief after the Reds managed to scrape a priceless 1-0 win at the Britannia on Sunday.

After a disastrous end to the 2014/15 season at Britannia, where Mark Hughes’ Stoke hammered Liverpool in a 6-1 win, an opening day fixture at the same venue was perhaps a conspiracy of fate for Brendan Rodgers.

Despite failing to create anything meaningful throughout the game, Liverpool were once again rescued by a moment of pure genius from the Brazilian, Philippe Coutinho.

As the packed Britannia caroused the sheer mediocrity on display for 85 long minutes, Coutinho shattered the norm with his individual bravura, when he danced past the Stoke midfielders and smashed it into the top corner from 25 yards.

Although Jack Butland could have done better with the shot, Coutinho’s venomous effort seemed destined for the net as soon as he wrapped his foot around it.

Prior to the 25 yard stunner, Liverpool looked a side incapable of creating anything, despite the array of attacking talents on the pitch, in the form of Adam Lallana, Philippe Coutinho, Jordon Ibe and Christian Benteke.

Rodgers fielded his opening day team in a rigid 4-2-3-1 system, with the primary focus on defending. The Liverpool manager later confirmed in his post match presser that his side knew they had to defend well for 90 minutes.

Liverpool kept it fairly simple with Milner and Henderson as the pivot and used Ibe and Clyne as the outlet on the right hand side.

Henderson staying too deep functioning as the controller meant that Milner was the only link between midfield and attack. Although Coutinho dropped into the midfield and attempted to link up with Milner, Liverpool looked disjointed.

Having Steven Gerrard in the team limited Rodgers’ options as a tactician. Without a specialist defensive midfielder & the legs to run, Gerrard could never have been deployed in a pivot successfully.

However, the addition of James Milner allowed Rodgers to field a 4-2-3-1 pivot where Henderson could stay deep and Milner could work as a moving central midfielder playing one-twos and joining the attack.

“The two either side need to have the capacity to control but also run and get forward, and get back in. So if they don’t have that then it’s very difficult for it to function”

– Brendan Rodgers on “the one and the two.”

The likes of Adam Lallana failed to trouble Stoke in the final third. The former Saints man touched the ball only 20 times in the opposition half. Young Jordon Ibe tried to implement his all action style on the game, but was comfortably dealt with by the likes of Muniesa due to his predictability.

At the start of the game Liverpool used the 4-2-3-1 to press with Milner moving up alongside Coutinho and Lallana/Ibe dropping beside Henderson making it a 4-3-2-1. While defending Liverpool changed to a 4-4-1-1 giving a flat defensive line in front of the back four with Coutinho and Benteke isolated in attacks.

Using this system, Liverpool failed to exploit the half spaces or turn in between the lines enough to worry Stoke in their final third.

Later in the game, Brendan Rodgers’ decision to bring on Emre Can breathed life into the Liverpool midfield as the Reds finally started controlling the game in the opposition final third.

Also the inclusion of Firmino meant that Liverpool were using the ball better in the final third. The debutant touched the ball 9 times in 13 minutes as compared to Lallana’s 20 touches in more than an hour.

With Emre Can on the pitch, Liverpool switched to a 4-3-2-1, where Can was the deepest holding midfielder and Henderson was allowed to move up and down. However, the game changer was James Milner being allowed to join Coutinho more often now.

The former City midfielder is an exceptional user of half spaces and occupied key positions alongside Coutinho and Ibe. He also created the first real chance of the game when he found Henderson free in the box with a chipped pass.

Further, with Can holding the midfield, the likes of Milner and Henderson were allowed to attack and press with maximum intensity. Coutinho was also allowed space to turn in between the lines and it was evident when he almost created a chance for Benteke after a mazy run into the Stoke penalty area.

Liverpool midfield: So who should be starting now?

It seems as though Brendan Rodgers finally has a set of midfielders that will allow him to play his favoured 433 with two variations.

So the question remains, what should be the ideal Liverpool midfield?

The answer to that question is, Liverpool need to be tactically flexible in order to do well this season. A lot of which players should start will depend on the kind of team Liverpool are facing.

Against teams sitting deep with organised banks of defence (mostly the bottom half sides), Liverpool will be better off starting with the midfield of Can – Milner and Henderson. Whereas, in a counter attacking system against the likes of City and Chelsea, Rodgers might have to use a deep pivot and organise his side.