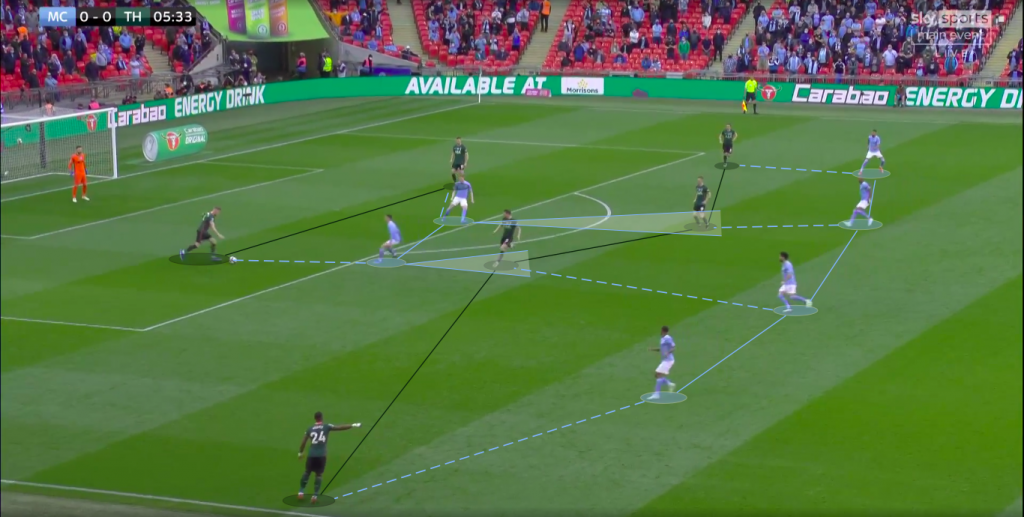 Just a week after he officially took over from José Mourinho on an interim basis as Tottenham Hotspur manager, Ryan Mason found himself in a cup final against Pep Guardiola’s Manchester City.

The visitors were certainly hungry, having been knocked out of the FA Cup by Chelsea at Wembley just a week ago, but Tottenham were absolutely starving for a trophy as they had not touched one since lifting the League Cup in 2006.

City were undoubtedly the favourites in this match, but with Harry Kane completing a surprising return from injury to get a starting spot, Tottenham had hope.

However, it was crushed by Guardiola’s side as they produced a dominant possession-based display to play their opponents off their park in a comprehensive victory, although the scoreline only read 1-0.

In this analysis, we will break down the factors that led to such a resounding success for City.

As is always the case, City’s brilliant possession-play was facilitated by an intense high press. 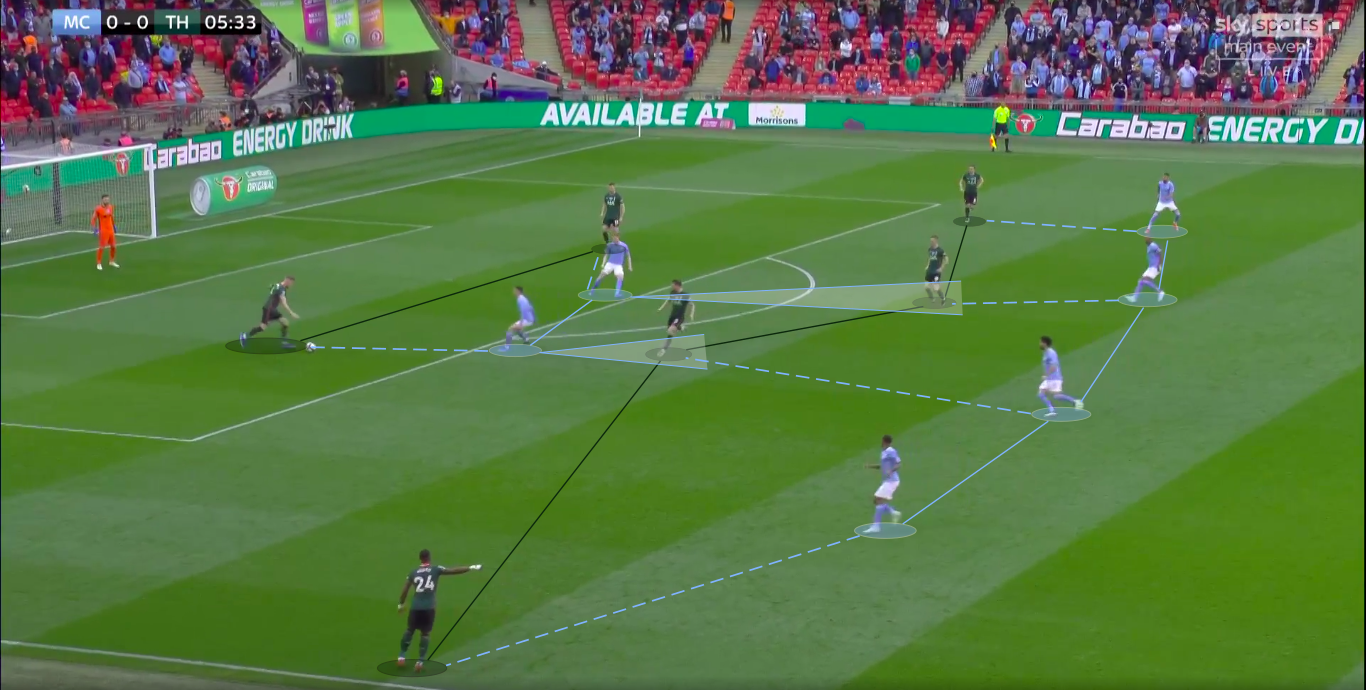 The Premier League leaders have been dropping into a 4-4-2 in defence quite often lately, but this time, they pressed in the same shape as well.

Kevin De Bruyne and Phil Foden were concerned with either Tottenham centre-back while also keeping an opposing midfielder in their cover-shadow.

The wingers stayed close to the full-backs, and the midfielders ensured that their counterparts would not have space to turn and get forward in transition if they received the ball.

Ther were incredibly committed to the cause too, as De Bruyne depicted just before half-time after over 40 minutes of intense pressing. 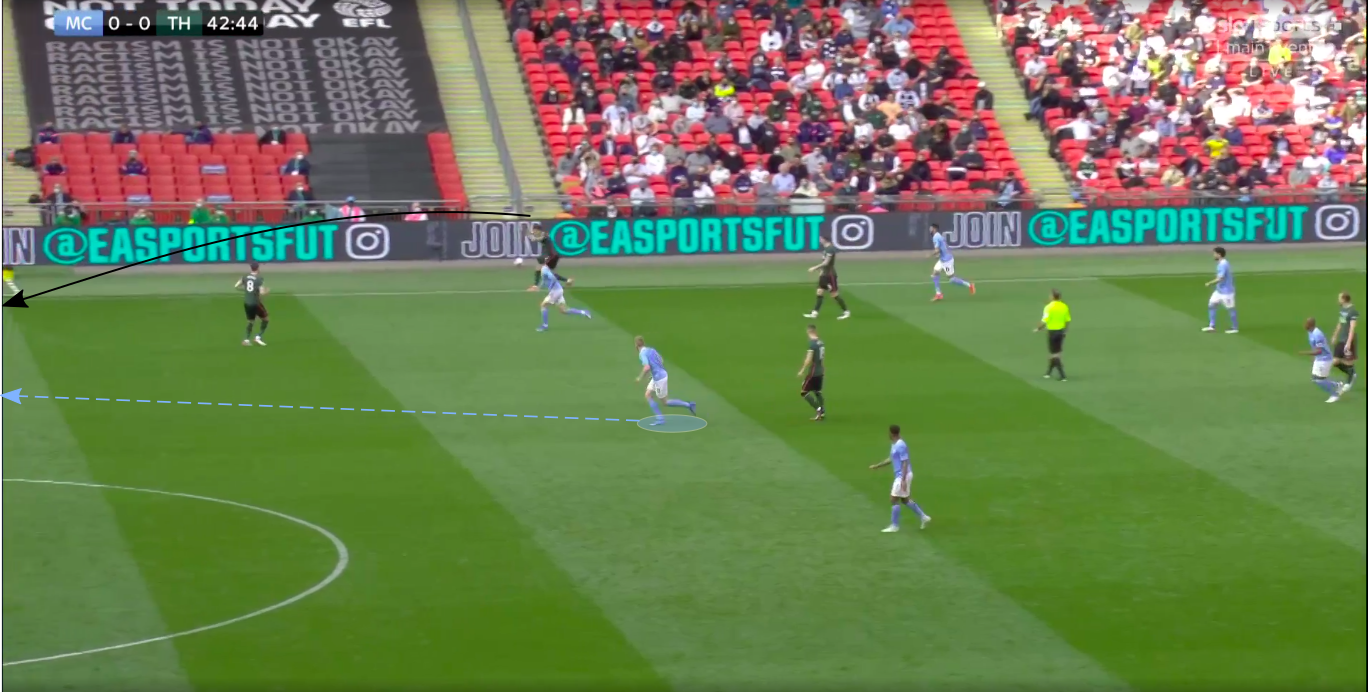 Tottenham had a throw-in at the edge of their attacking third, which they went backwards with. De Bruyne sprinted to close the receiver down, who played it on to a centre-back. He was closed down by the Belgian international, so he went further back to the keeper. 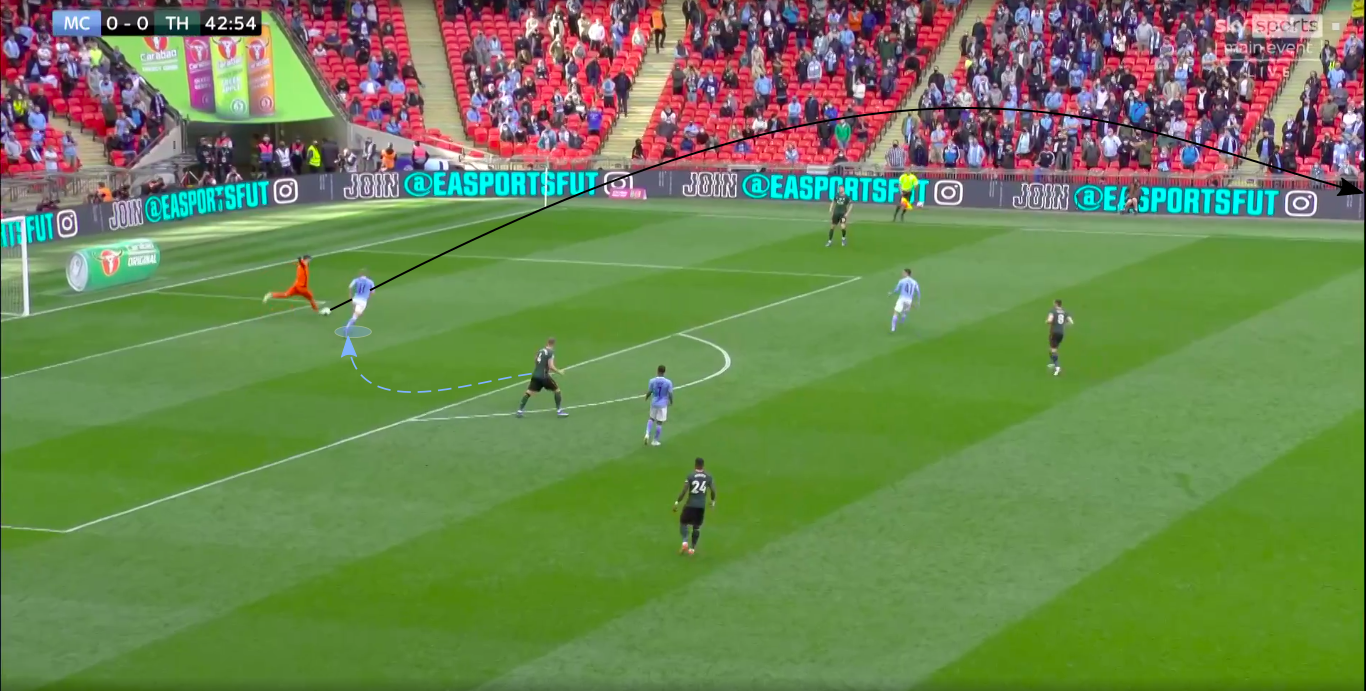 De Bruyne did not stop, completing an 80-yard sprint to close Lloris down and forcing him to punt the ball out of play.

With six men involved in the core pressing structure, the Mancunian side could pose a serious threat after turning the ball over too. 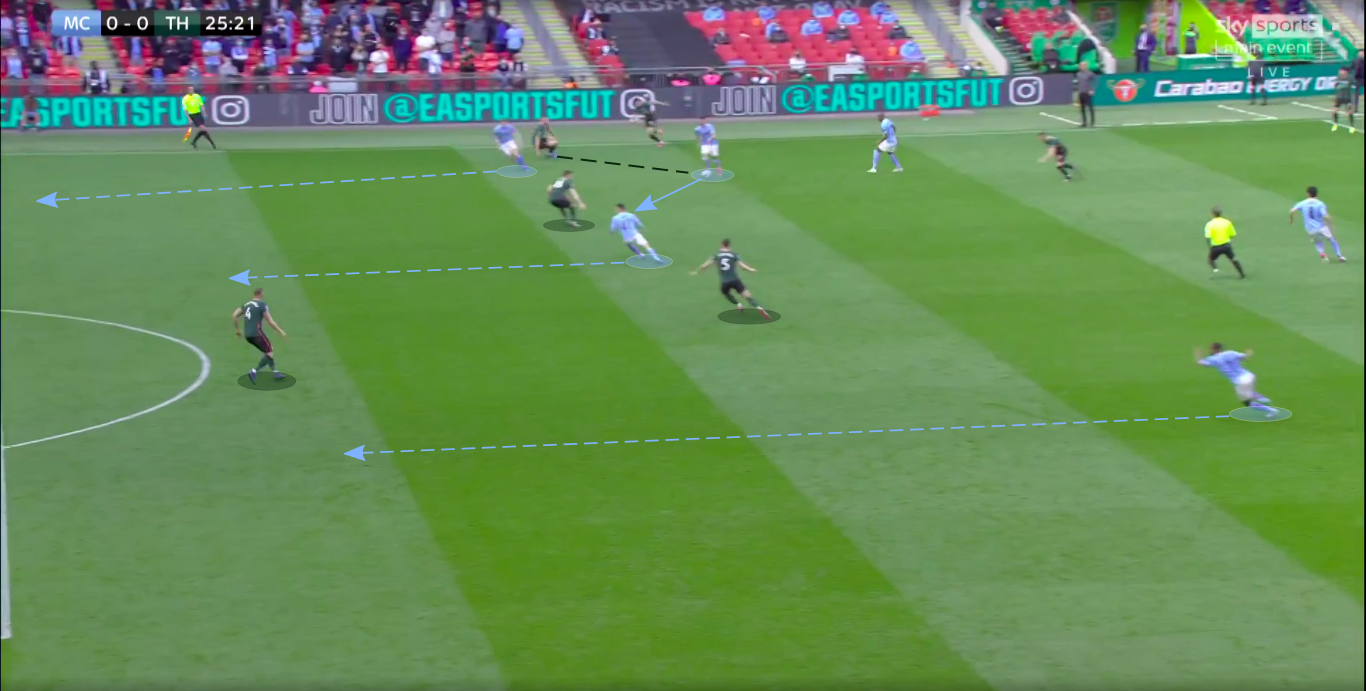 Here is a great example of that – Eric Dier’s pass was just intercepted by Riyad Mahrez, who now sees three runners in front of him against as many Tottenham defenders.

Although City failed to capitalise from this situation as Foden’s shot was heroically blocked onto the post by Dier, their threat became quite clear.

City’s high press proved to be quite successful, as they prevented Tottenham from having any chances of playing out from the back and turned the ball over high up the pitch very often, completing five tackles and interceptions and as many blocks in the attacking third.

Therefore, Spurs were forced to go long quite often, with Hugo Lloris and the two centre-backs attempting a combined 47 long balls, of which less than half were successful.

Their front-three won just four aerial duels combined, which was considerably lower than the 14 that City’s back-four managed, meaning that they were dominated in that regard too.

Although most hoped that Tottenham would start looking a lot brighter in possession with a new manager, that has not been the case so far.

Against this City side, that should not be too much of a surprise, which is why Spurs’ clear attacking plan was to hit their opponents in transition. 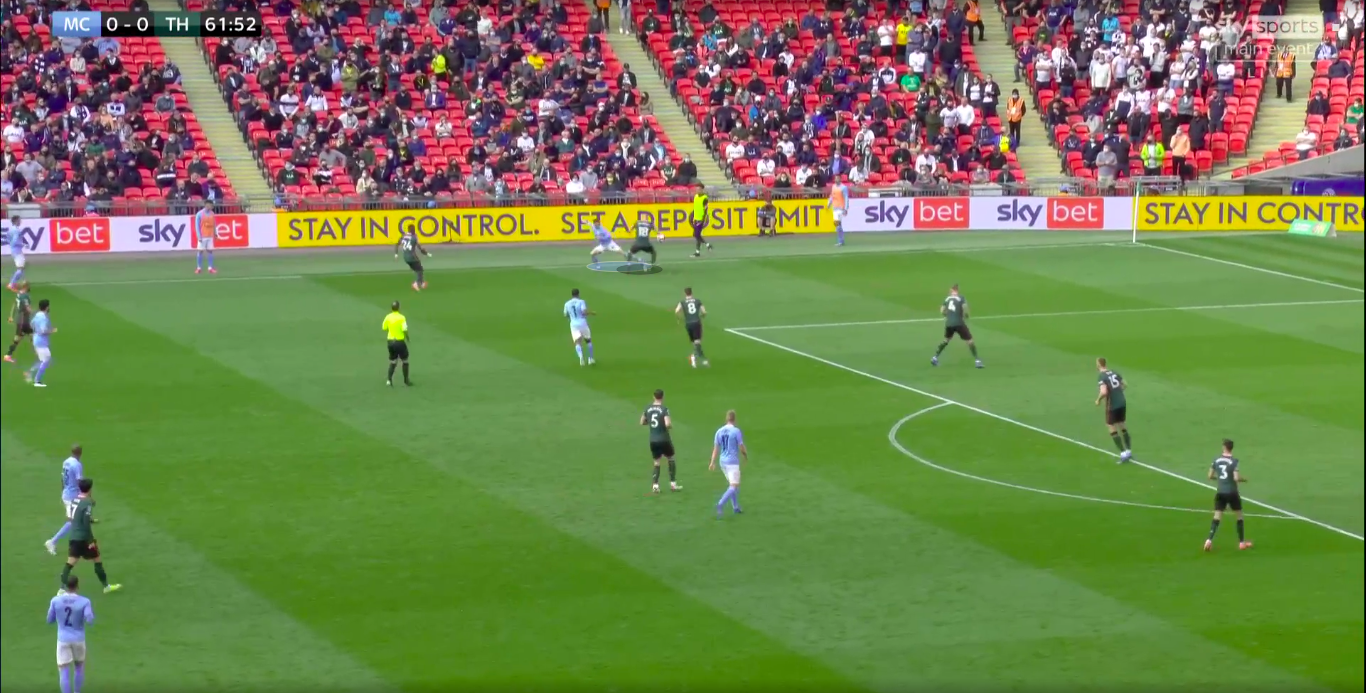 Although breaking past the City press proved quite difficult, Tottenham could create such scenarios by transitioning into attack quickly after turning possession over, as Giovani Lo Celso did here. 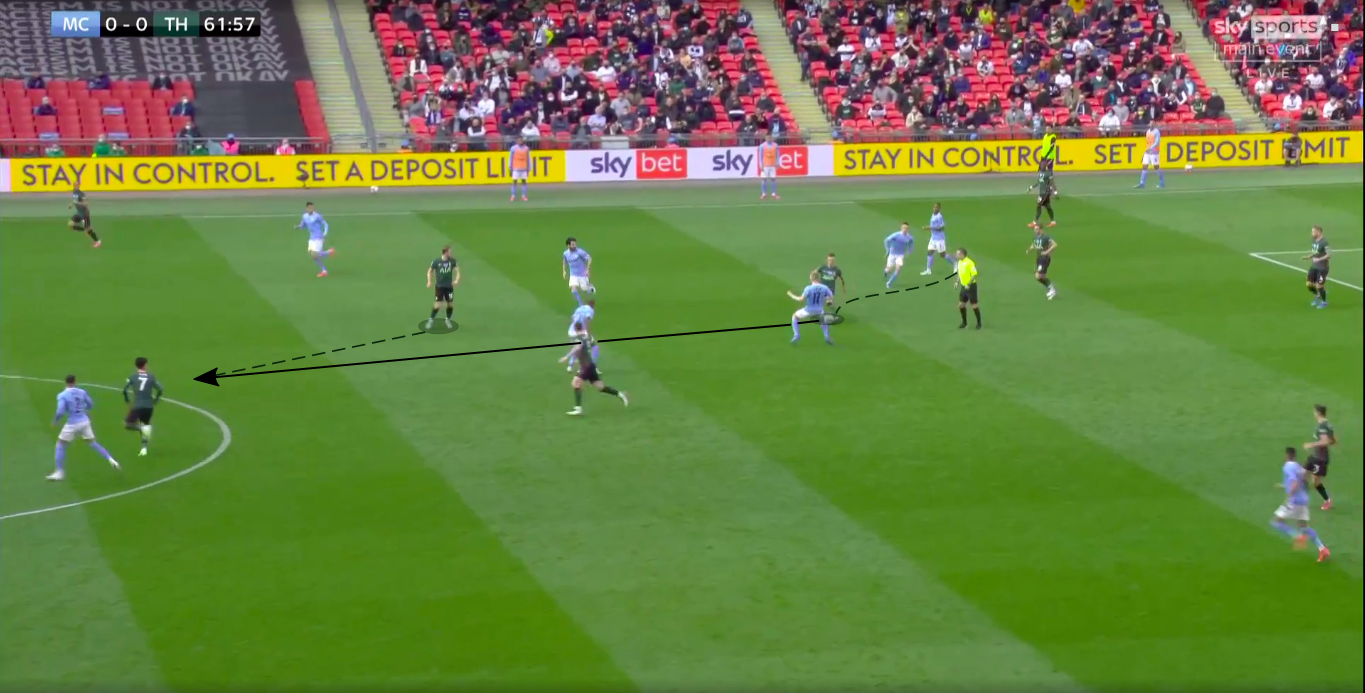 He then carried the ball forward and played a pass into Kane’s path, with the English forward proving to be Tottenham’s most potent player both in terms of creating and finish in such situations, as his tally of 26 goals and 15 assists in all competitions proves. 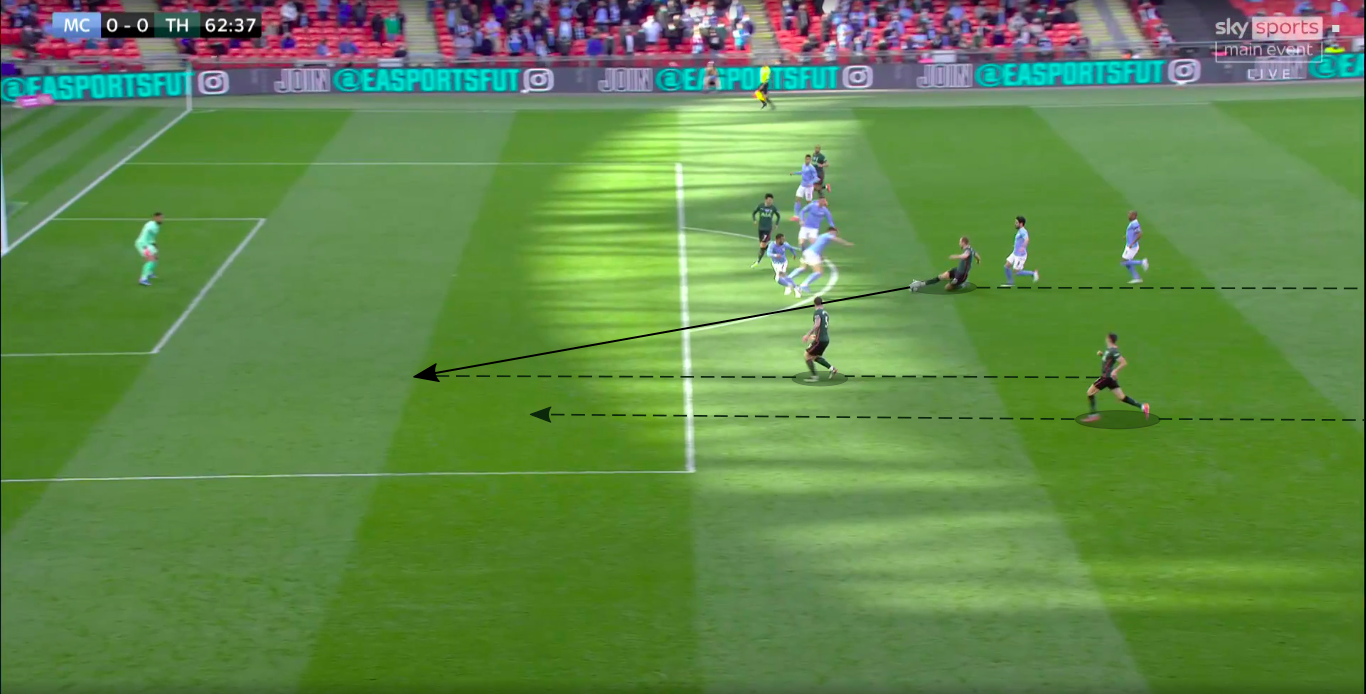 Kane drove the City defence as far back as possible before slipping the ball to Pierre-Emile Højbjerg, who had Sergio Reguilón on the overlap. 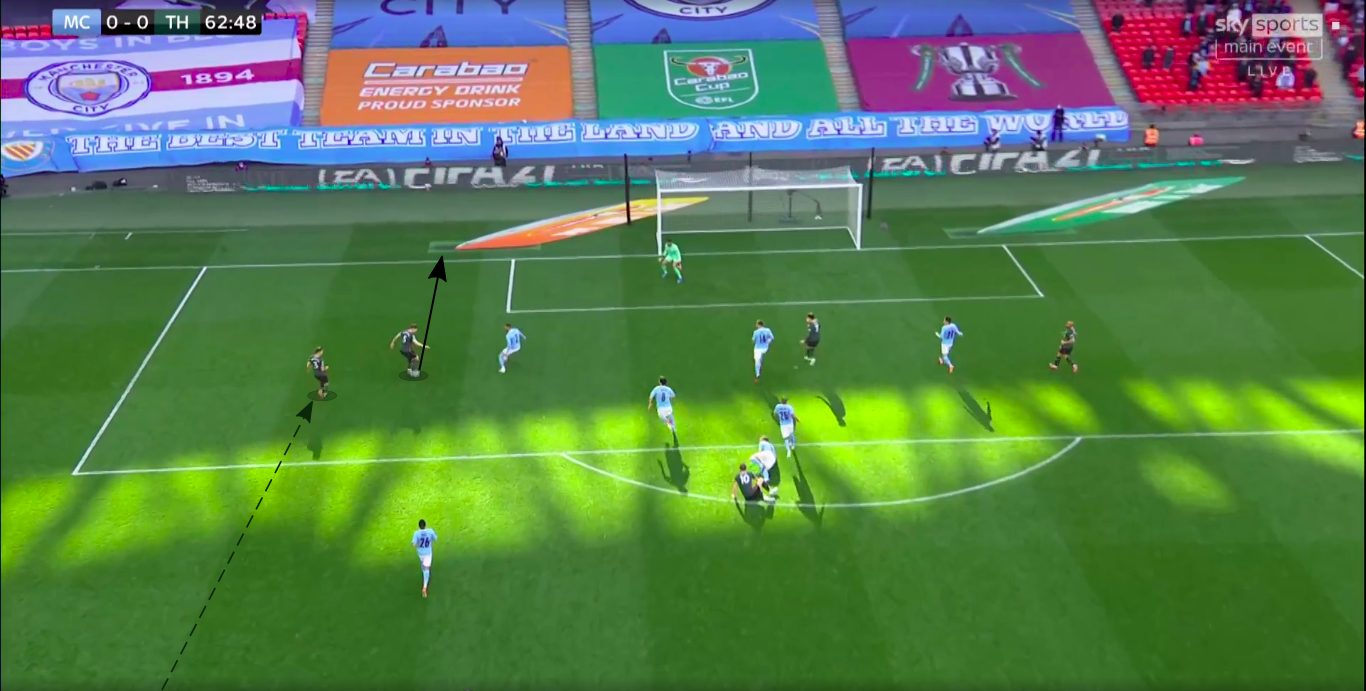 Unfortunately, Spurs’ only cohesive attack of the match ended anticlimactically as Reguilón checked his run before Højbjerg played a no-look pass into his path, with the ball petering out harmlessly.

This was not the only time Tottenham turned the ball over and moved forward quickly, though, but on every other occasion, their attacks ended differently. 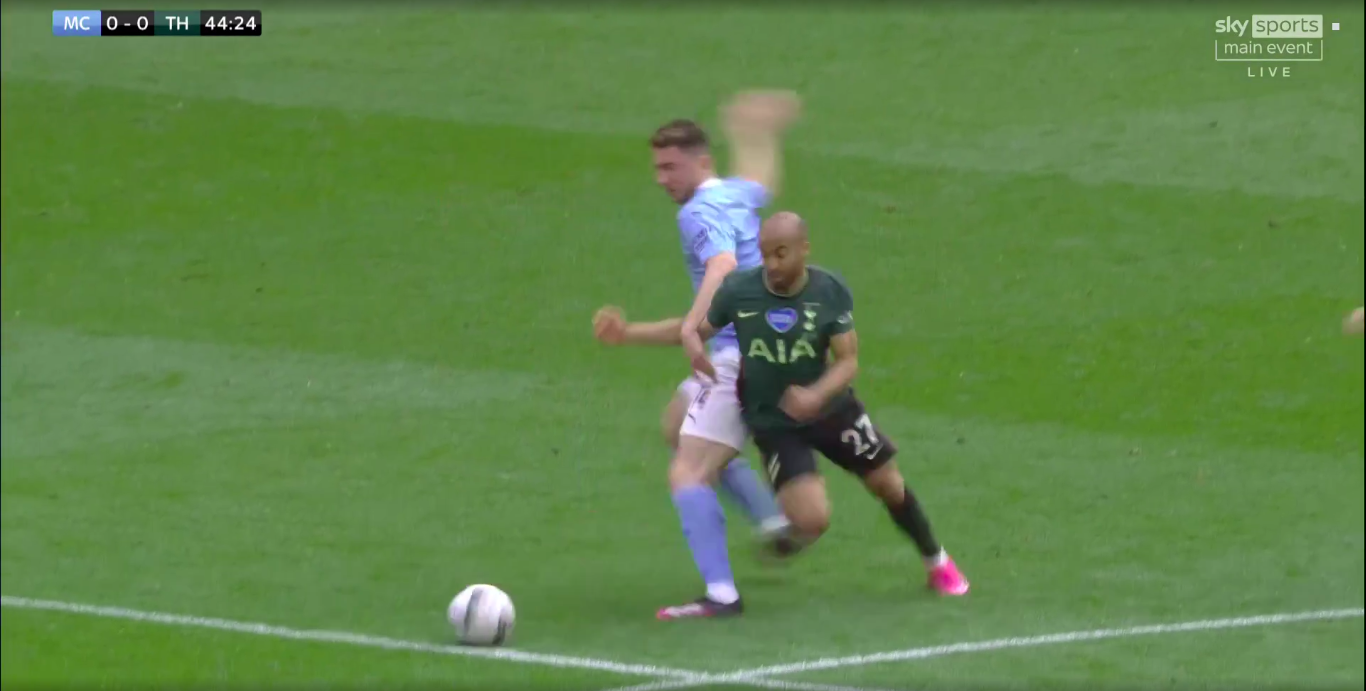 Sometimes, the only way of stopping an attack is by bringing the attacker down in any way possible.

City and Guardiola certainly practise this philosophy, which is why tactical fouls such as this one committed by Aymeric Laporte proved to be crucial for their defensive solidity.

Even though the Frenchman received a yellow card, it was certainly worth it as he ended up preventing a scenario similar to the one we saw above. 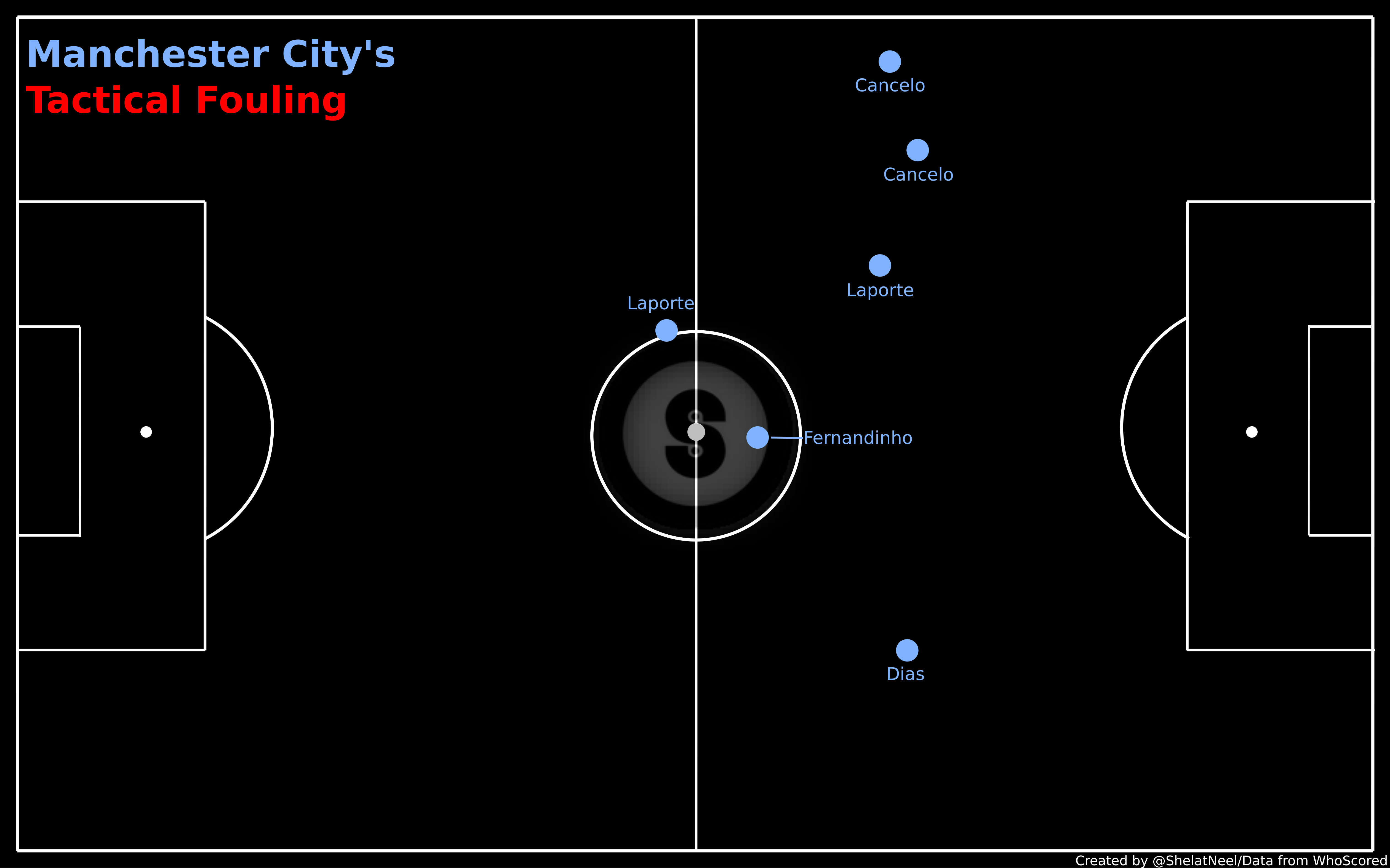 This map shows all of the tactical fouls committed by City’s defensive players. Evidently, most of them are around the halfway line and edge of the attacking third, meaning that they were used to stop a transition before it really started.

The involvement of four differently players shows a well-planned and well-executed strategy to derail Tottenham’s attacks.

It was further helped by Mason’s decision to take Lucas Moura off in the 67th minute. The Brazilian was by far Tottenham’s most threatening player in such situations where he attempted four dribbles (completing three) and drew four fouls too.

The game was also crying out for a ball-carrying midfielder like Tanguy Ndombele from a Spurs perspective, but he never came on either.

Manchester City’s field-day on the wings

By opting to switch from a 4-2-3-1 to a 4-3-3, Tottenham attempted to congest the midfield in defence and prevent City from playing right through them. While they did succeed, City found an alternative solution quite quickly. 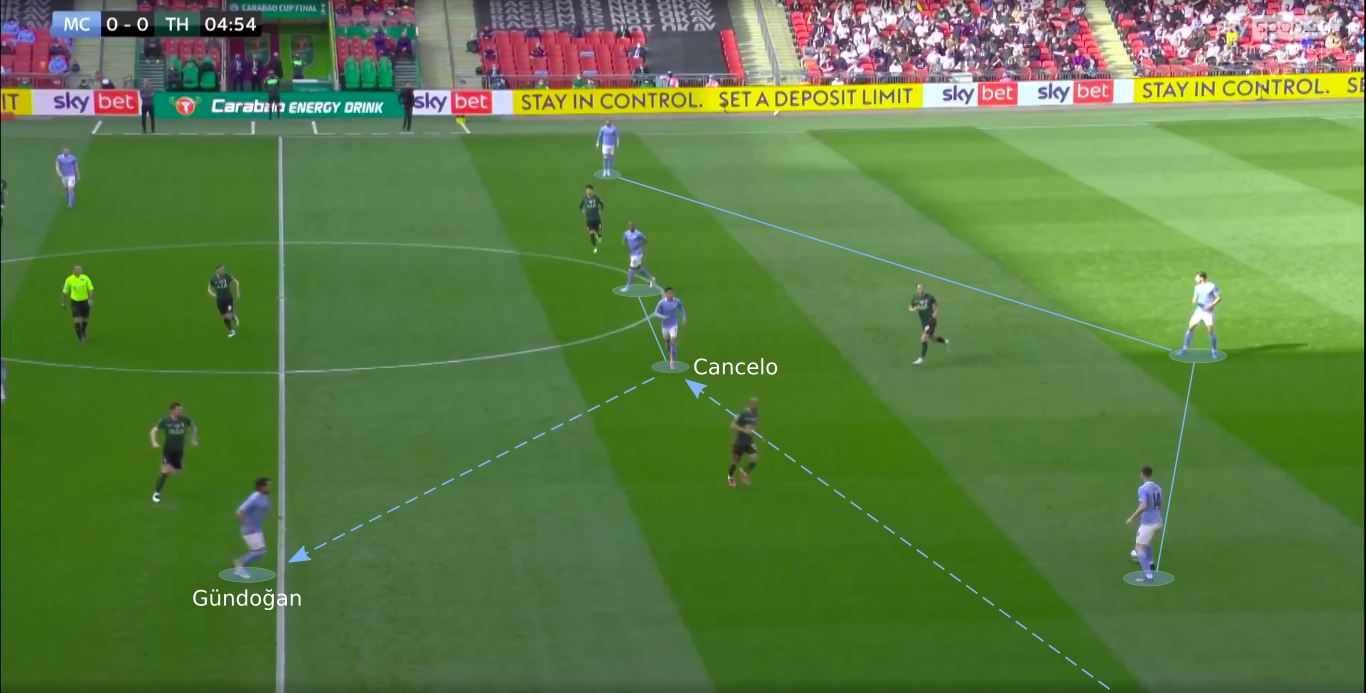 City started with João Cancelo moving into his inverted midfield role in a 3-2 build-up shape, while İlkay Gündoğan moved forward and slightly to the left to occupy some of the space vacated by the full-back. 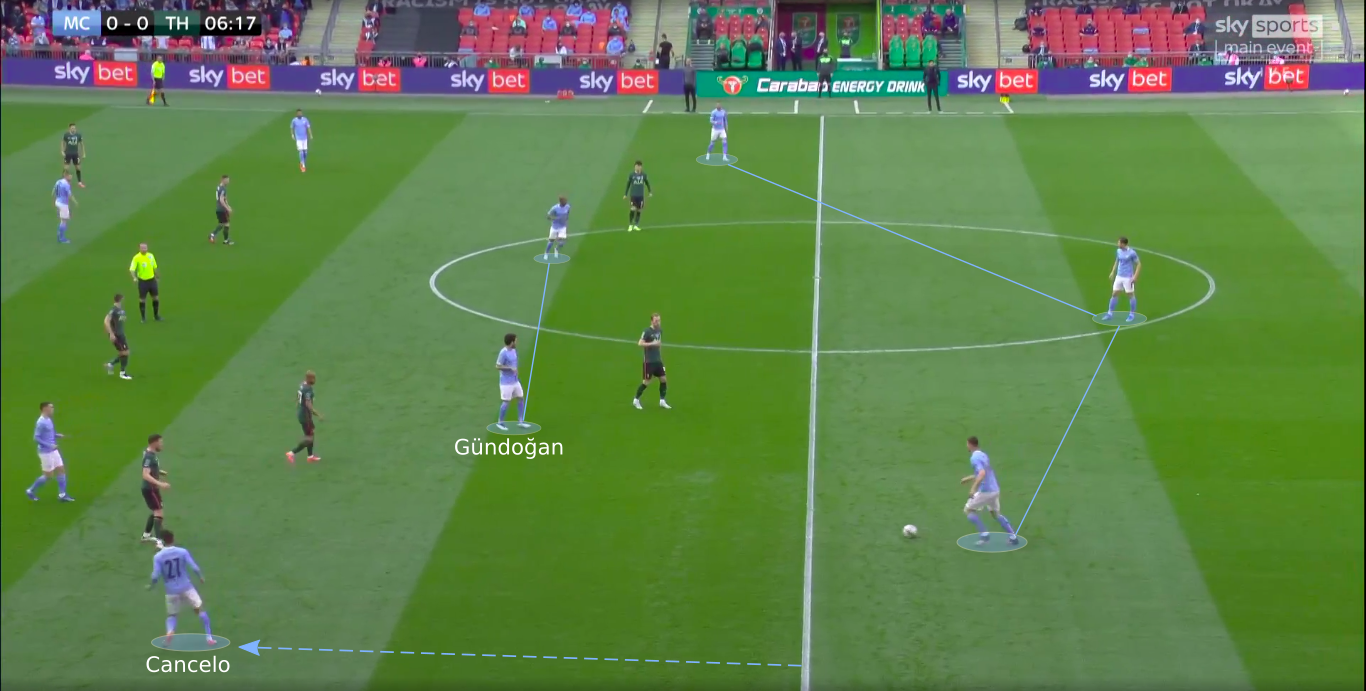 Around the sixth minute, they stopped doing this, with Gündoğan staying in midfield and Cancelo operating on the left flank. 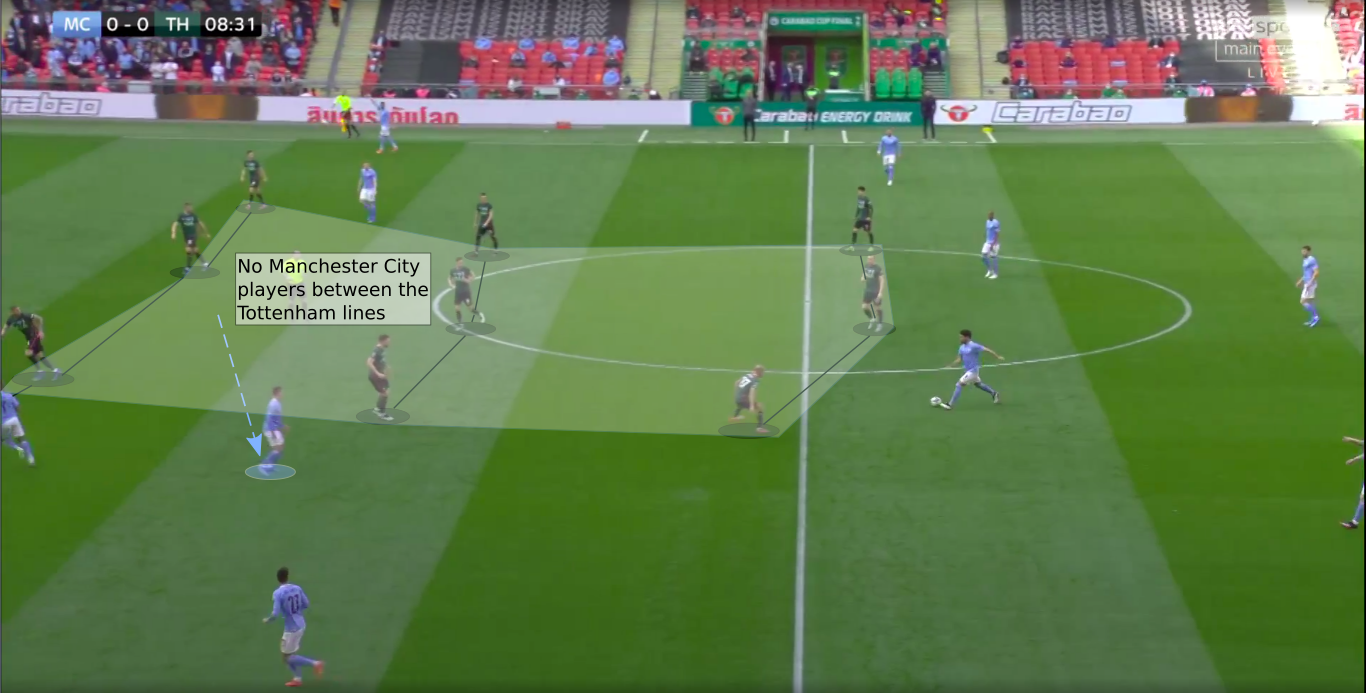 With the German not pushing forward anymore, City were left without any central attacker since Foden had to drift out to the left in place of Gündoğan. This meant that Tottenham’s narrow 4-3-3 was left defending empty spaces. 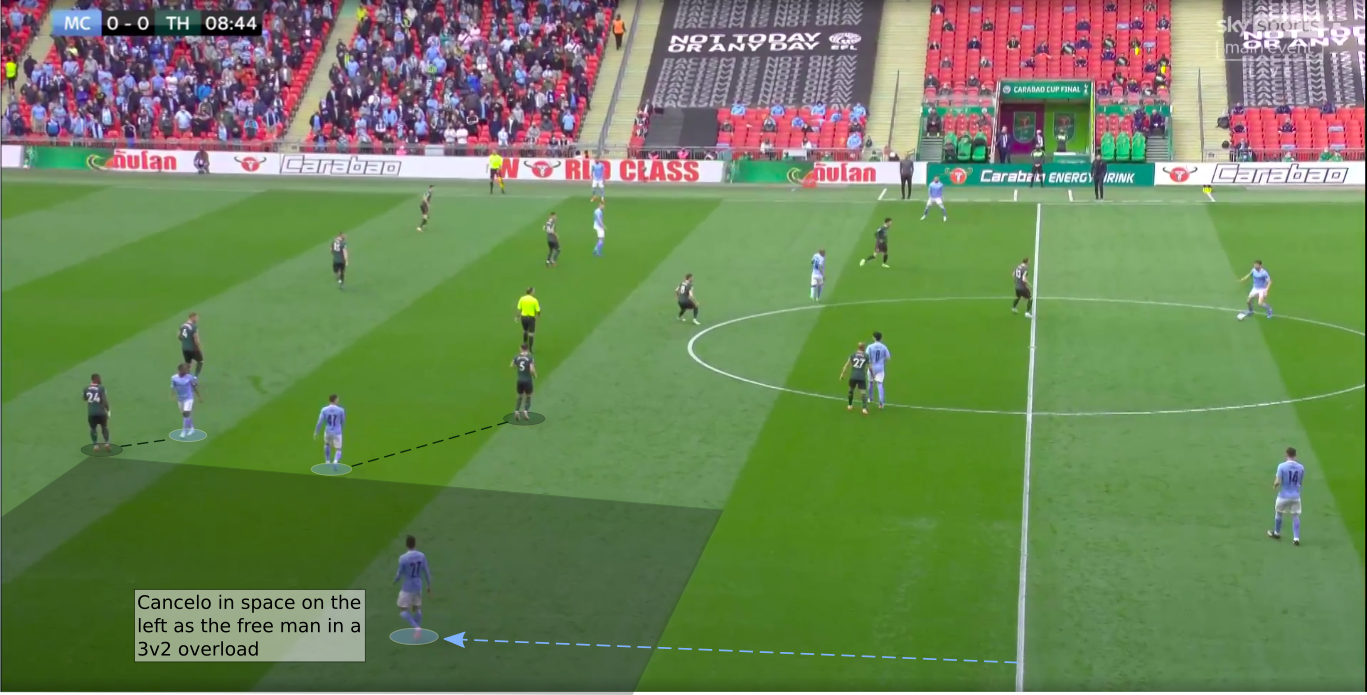 Further, with Cancelo having the freedom to push forward on the left, Guardiola’s side could overload the flank in a 3v2 against Serge Aurier and Højbjerg. This is probably why 44% of City’s attacks came on this flank. 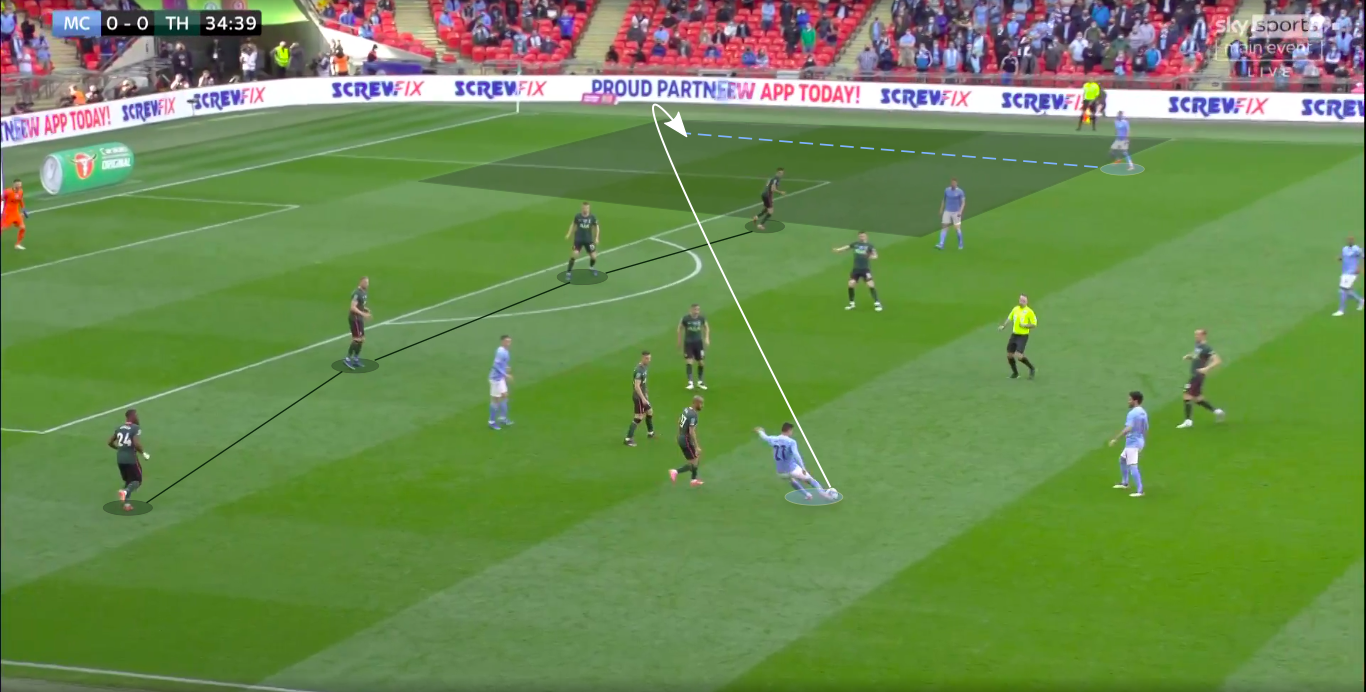 With the volume of attacks and attackers on the Tottenham right, their defence naturally shifted in that direction.

This is just what City wanted, as it meant that Mahrez would have a lot of free space on the right, where he could receive such crossfield balls with his unreal first-touch and trouble Reguilón one-on-one.

The Algerian winger was just sensational, as he put in a man of the match display, which included five crosses, four shots, three chances created and a couple of successful dribbles. Reguilón, on the other hand, had a torrid time at best. 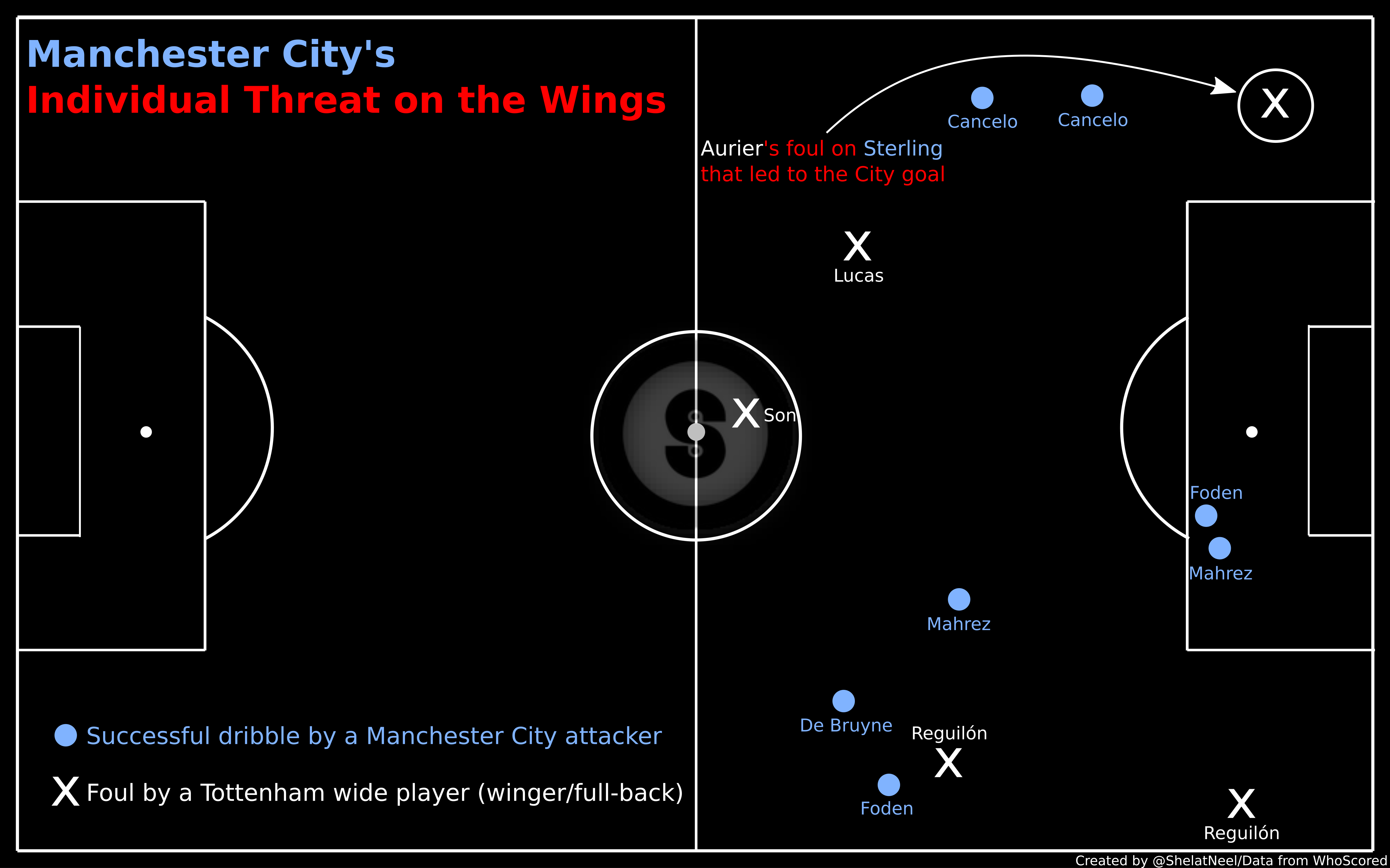 This visualisation shows just how threatening City’s attackers were on the wings, as both Foden and De Bruyne peeled off to the wide areas to cause damage too. The Tottenham full-backs, on the other hand, were not so good.

Although their goal came from a centre-back heading a set-piece home, City’s victory was utterly and completely dominant.

They fashioned 21 shots to Tottenham’s two, kept nearly two-thirds of possession, pressed intensely and successfully, succeeded in preventing counterattacks for the most part and looked quite potent in the final third.

More importantly, they got the job done within 90 minutes, which could prove crucial for their midweek Champions League tie against Paris Saint-Germain.

Equally important will be the confidence that comes with lifting the trophy, as well as the morale boost generated by the presence of fans. Overall, this was a perfect day for those in blue.

By contrast, Tottenham have passed up yet another opportunity to lift a trophy, although this should not be a surprise.

They were facing one of the best sides in Europe while their manager was younger than some of his players in just his second senior match in the dugout, so even holding on to a 1-0 should not be considered too disappointing.

While this defeat will surely sting for a while, they need to get back to business quite quickly, as the race for Europe in the Premier League continues to heat up.