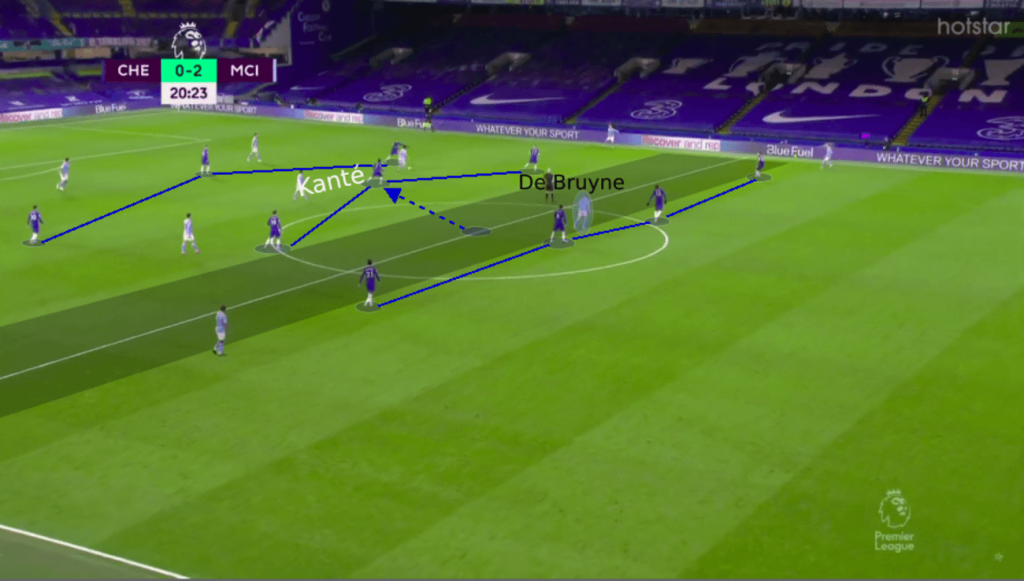 The Premier League match between Chelsea and Manchester City was being built up as quite a big one. Prior to the match, the Blues only had one win in their last five Premier League games but were nearly back to full squad strength as Hakim Ziyech made a much-awaited return from injury. City, on the other hand, were unbeaten in their last six Premier League matches, but with the likes of Ederson, Kyle Walker, Gabriel Jesus, Ferran Torres, Aymeric Laporte and some others missing due to COVID or injury, their squad was looking fairly depleted, so much so that Pep Guardiola named only eight substitutes including three EDS (Elite Development Squad) players.

The match, however, proved to be a simple stroll in the park for City. They breezed past Chelsea with unmatched effortlessness and a performance reminiscent of the ones that took them to a hundred points three years ago.

In this analysis, we’ll take a look at what went right for them, and all the things that went wrong for Chelsea.

City have averaged 59.8% possession per match in this season of the Premier League, but so often, they have failed to make anything of it. Against Chelsea, however, it was a different story. 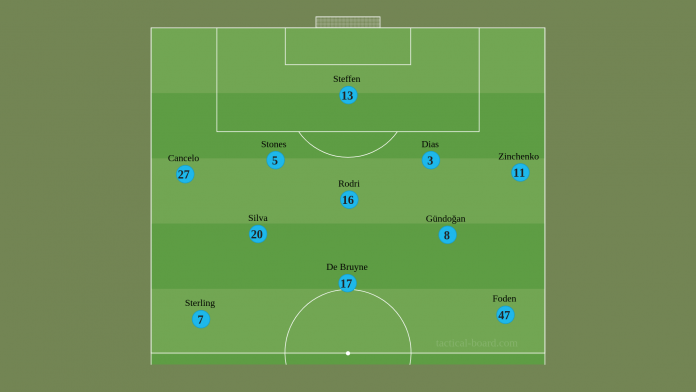 Pep Guardiola diverted from the 4-2-3-1 double-pivot system he had used for most of this season, instead opting to go for a 4-3-3 with Kevin De Bruyne as a false nine. The wingers, and Raheem Sterling especially, were instructed to stay high, preventing the Chelsea full-backs from pushing too far forward. There were no selection surprises as such considering City’s COVID issues.

City played some of the best possession-based football we have seen all season with that system, so here’s how it worked. 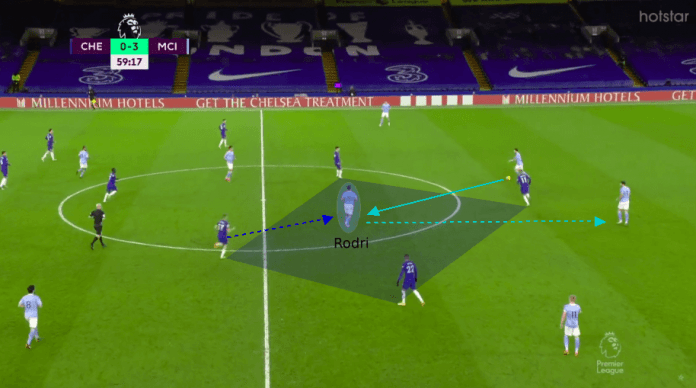 Rodri was the man in central midfield who glued the City side together by operating between the lines and connecting the defence to the attack. His positioning also served to try and create openings in the Chelsea lines, as you can see above. 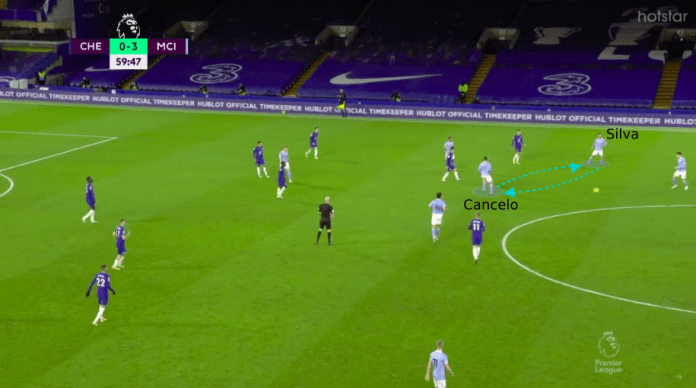 ‘Inverted full-backs’ have been a thing in England ever since Pep Guardiola came to City, and his best-ever exponent of that looks to be João Cancelo. As is often the case, he drifted into central midfield in possession, and this time, Bernardo Silva moved into his position at right-back. 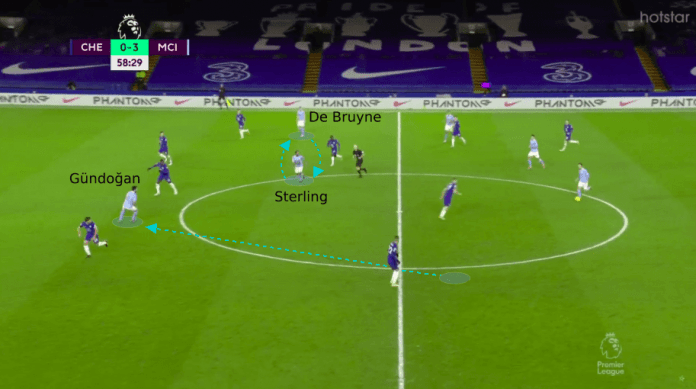 Kevin De Bruyne had full positional freedom, so he often drifted out wide or dropped into midfield. In such cases, İlkay Gündoğan pushed up into the position of a striker, while the winger (if De Bruyne went wide) would also tuck inside. 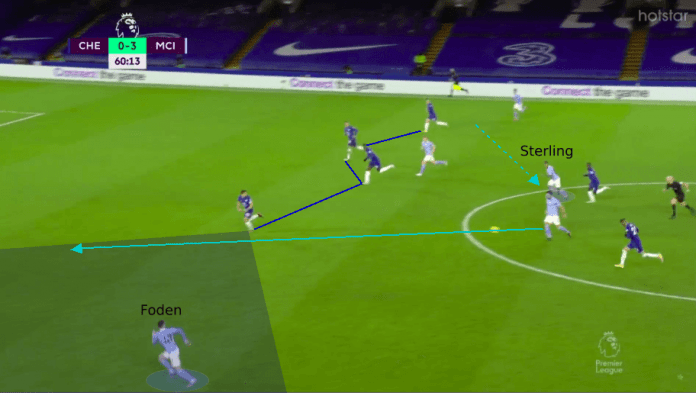 Usually, one of the two wingers tucked inside to help in midfield, while the other stayed wide to provide an outlet. In this manner, the Chelsea defence could be stretched, and the man out wide would have a lot of space to work with when he got the ball.

In these ways, Manchester City tried to probe Chelsea’s defences and create openings. They had it quite easy, though, as Chelsea’s lines were very disjointed, as we will discuss below.

For most of this season, Frank Lampard has deployed Timo Werner on the left wing. Prior to this match, he had an 11-match long goal-drought because he was always playing out wide, so fans were relieved to see him feature as a striker in the lineup. 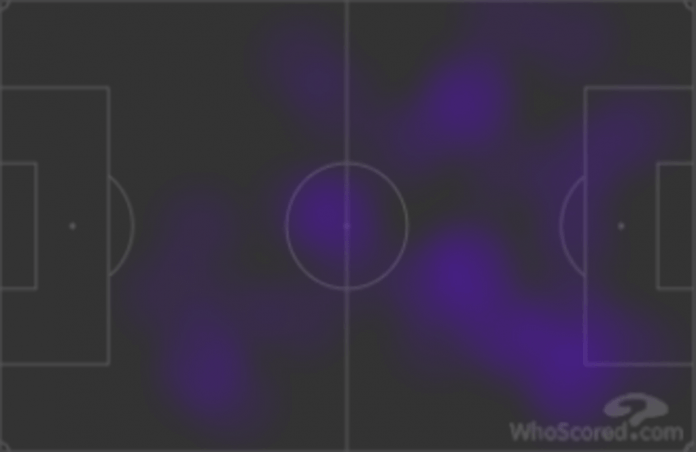 This heatmap is pretty damning – it shows that Werner was all over the place and not exactly at the end of things. The statistics back that up too – he only managed to get one shot away in the whole match, and that was off target too.

One of the major reasons for Timo Werner’s failure centrally might be the fact that he has become so used to playing out wide for Chelsea that he was never able to switch out of left winger-mode. 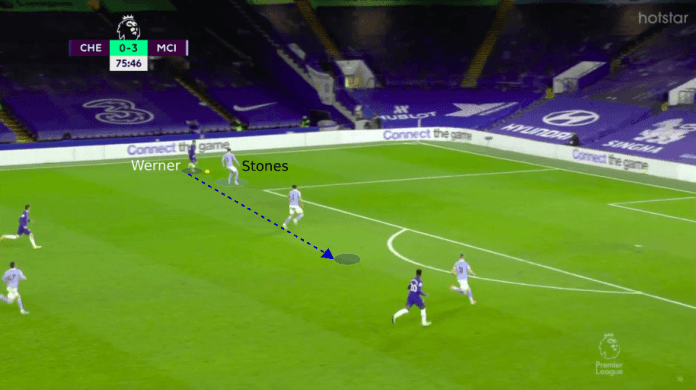 You can see precisely that above – Timo Werner is out wide on the left with the ball. Crossing is not one of his strengths – finishing is – so he should be the one on the end of the crosses centrally, not the one delivering them. In this case, Stones easily marshalled the ball out for a goal-kick.

In the rare cases that Chelsea managed to deliver a ball into the box, he was never on the end of it. Look at his positioning and movement below: (Reminder: he’s supposed to be a striker.) 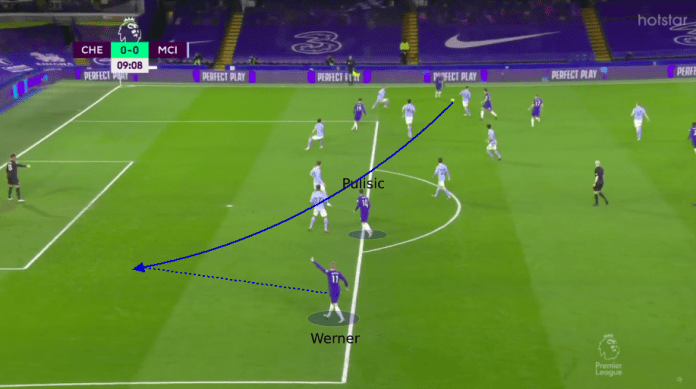 Puzzlingly, Werner is wide and Christian Pulisic, the designated left winger is positioned centrally. However, this is still understandable as Werner has a good amount of space to himself since he is unmarked and can attack the cross when it comes in. 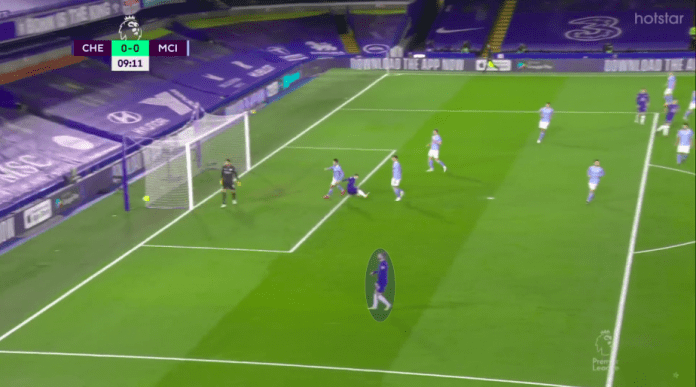 Manchester City were the team without a recognised striker on the pitch for most of the match, but Kevin De Bruyne and İlkay Gündoğan did a stellar job of masking that problem. Chelsea, on the other hand, did have a formerly-prolific striker on the pitch throughout the game, but he absolutely failed to provide a focal point for the side with less possession, so it was almost as if they were missing a striker.

For all of City”s slick passing and perfect possession-play, they wouldn’t have ever imagined that they would get such great chances in the match. However, Chelsea were just so open defensively that you wouldn’t be too surprised to see West Brom put three past them in one half. 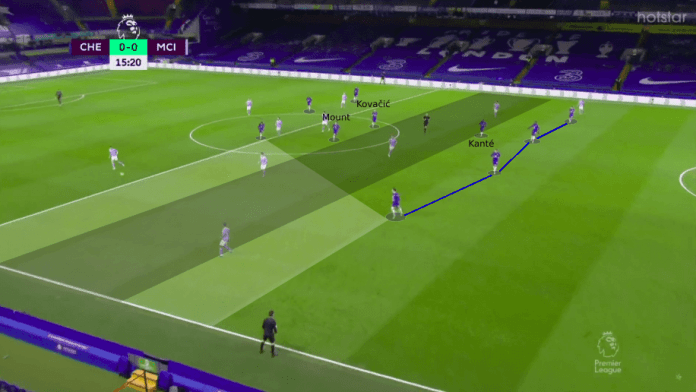 This instance does a great job of showing how terribly disjointed the Blues were. City have simply moved the ball from left to right, and they have an acre of space to work with on the wing (in white). Further, their midfield is so separated – Mason Mount and Mateo Kovačić are nowhere near N’Golo Kanté – so there is a massive amount of space within the midfield (in black). An under-13s coach would probably be fuming if he saw his team in this state. 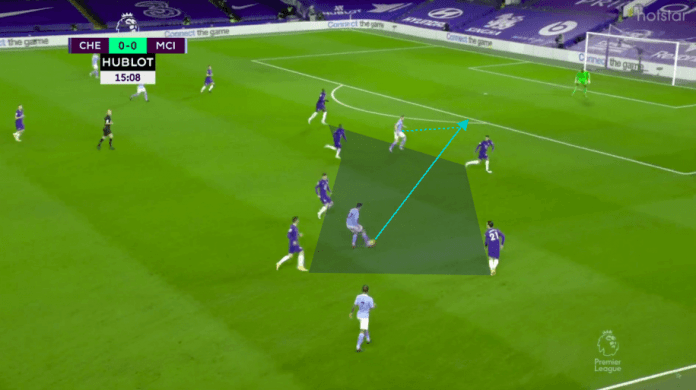 Chelsea frantically moved to their left to try and close this area down, but in doing so, they left huge gaps in the half-spaces, which City needed no invitation to exploit as both João Cancelo and Kevin De Bruyne looked to combine using that opening. 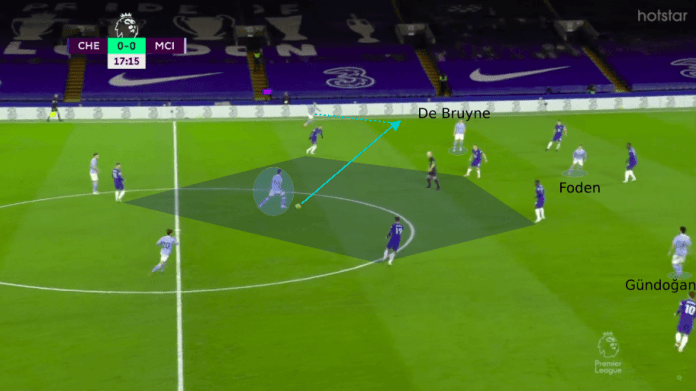 Their problems which led to the opener started when they allowed Rodri to have a whole postcode to himself at the very middle of the park. Also, notice the aforementioned movement of Kevin De Bruyne to the left this time which sees Phil Foden drift infield and İlkay Gündoğan operate as a striker. These movements allowed Oleksandr Zinchenko to get ahead and overlap on the left flank. 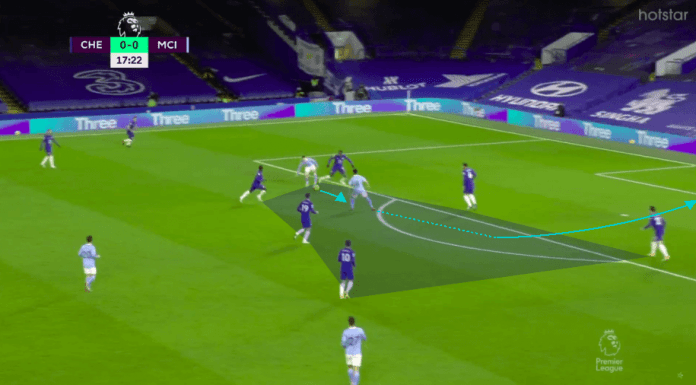 Chelsea’s miserable joke of an attempt to defend continued after Zinchenko fizzed the ball into Foden, who, along with Gündoğan, had a healthy amount of space (extremely unhealthy if you’re Chelsea) between the lines which allowed them both to turn and the latter to get a shot away, which nestled in the bottom corner. 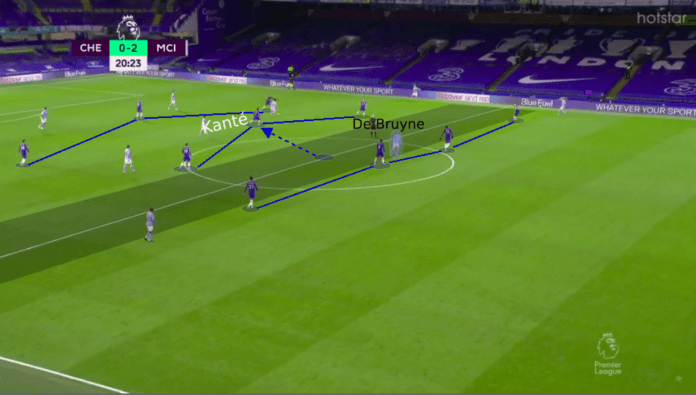 The second goal was another result of the lack of cohesion between the Chelsea lines. Their 4-3-3 shape is fairly visible, but the issue is that N’Golo Kanté has pushed ahead from his holding midfield role, leaving a lot of space between the lines. That results in only one thing – yet more exploitation by Kevin De Bruyne. 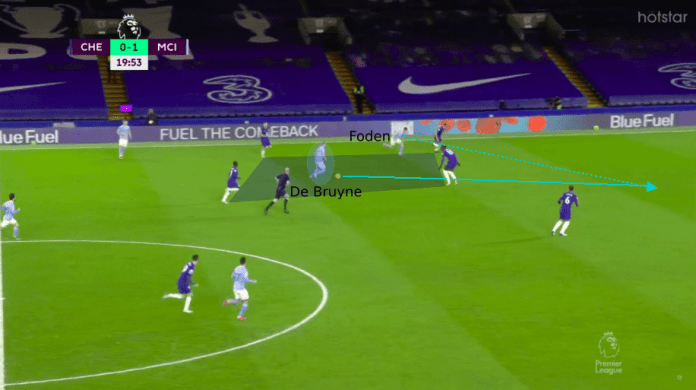 Kevin De Bruyne has way too much space in the attacking third with the ball, and that only spells danger. He has all the time in the world to play a through pass to Phil Foden, and when the ball breaks for him again further up the pitch, his cross and Foden’s precise finish make it 2-0.

And then comes that shambolic third goal. The less we speak of it, the better for Chelsea fans, so let’s leave the talking to this image: 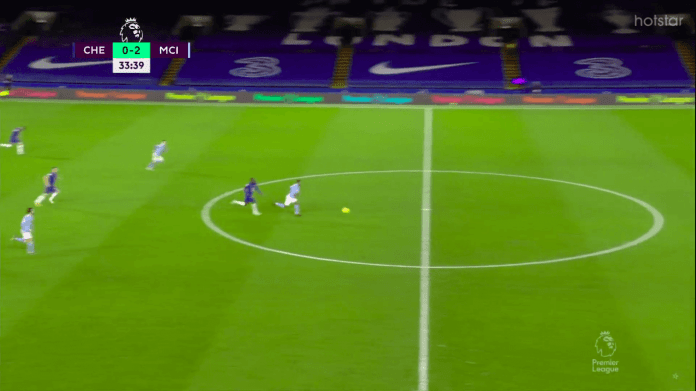 Seen something similar lately? Of course you have:

Manchester City turned back the years in an exhilarating display of the highest quality football despite coming to Stamford Bridge with a depleted squad, while Chelsea just couldn’t touch them. Pep Guardiola got everything right –  his tactics, personnel and decision-making, while the Cityzens on the pitch operated at the highest level. Happy times for those in sky blue.

That can’t be said for the Pensioners, however. The way Chelsea played was pretty shocking for a side that many labelled title-challengers just a month ago, and Frank Lampard has yet more questions to answer, including some serious ones about his job.