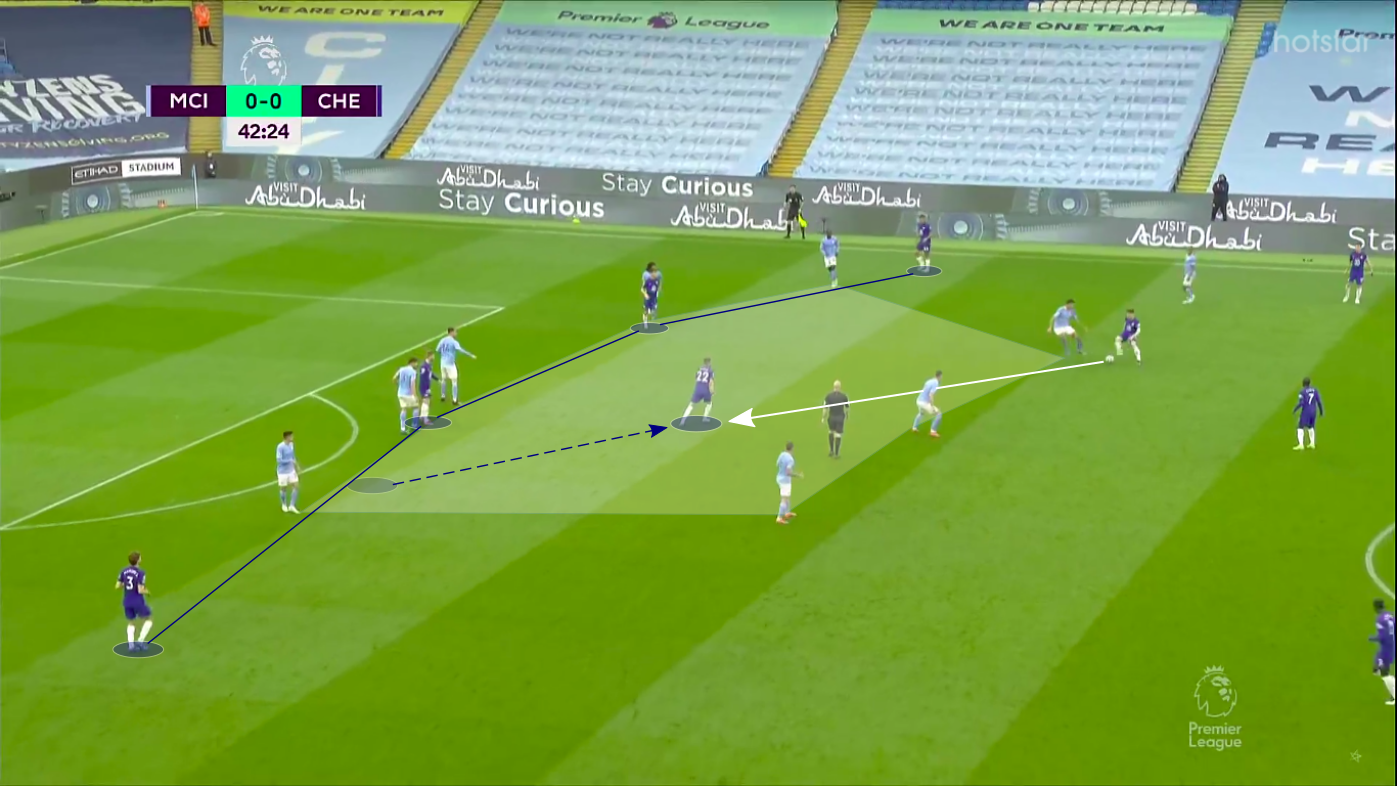 Just over three weeks after their FA Cup semi-final success, Chelsea faced Manchester City at the Etihad Stadium on Saturday, with the hosts having the chance to seal the Premier League title with a victory.

The two sides were fresh after midweek Champions League semi-final successes – against Paris Saint-Germain for City and Real Madrid for Chelsea – but with wholesale changes to the line-ups (nine for City and five for Chelsea), this was no dress rehearsal.

Psychologically, though, this was a significant battle, and Chelsea came away with a crucial win (for their top-four hopes, too) after going a goal down in the first half.

The match was filled with plenty of controversies, but we will strictly restrict ourselves to focusing on the tactical aspects of the clash.

Pep Guardiola confused every living soul on earth with his line-up, and the formations that it created were interesting to say the least.

In possession, the system was a version of 4-1-2-3, as Joao Cancelo stayed with the defence while Nathan Aké drifted out to the left.

Further forward, Raheem Sterling operated as a free-8 on the left, with Ferran Torres maintaining a similar position on the other side, although he rarely received the ball as his 21 touches outside the attacking third were less than half of Sterling’s 43.

Gabriel Jesus operated slightly deeper than Sergio Agüero, and with Benjamin Mendy pushing forward on the left, City had a clear left-sided bias and used it too, as 48% of their attacking moves came from that side. 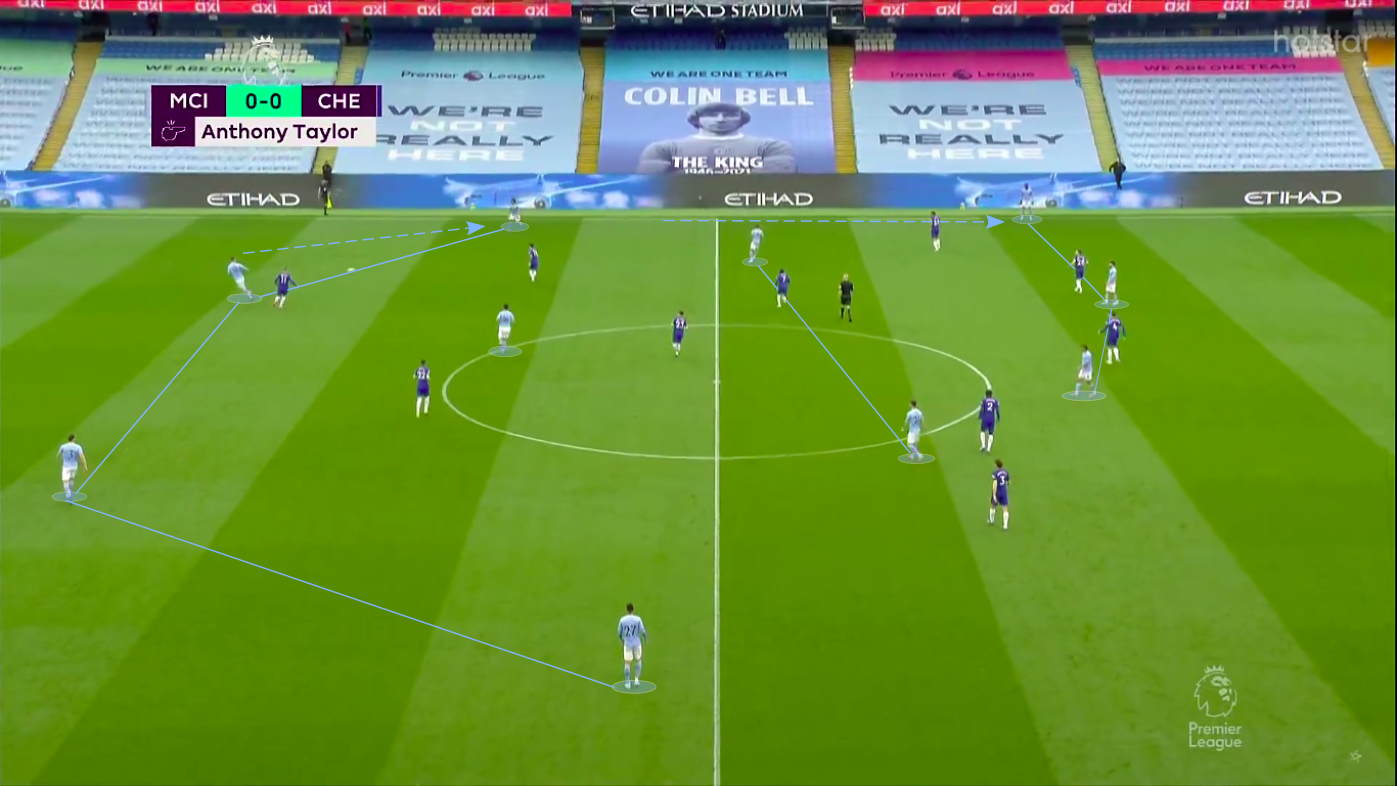 However, City looked most potent when attacking from the other side. Let us explore why: 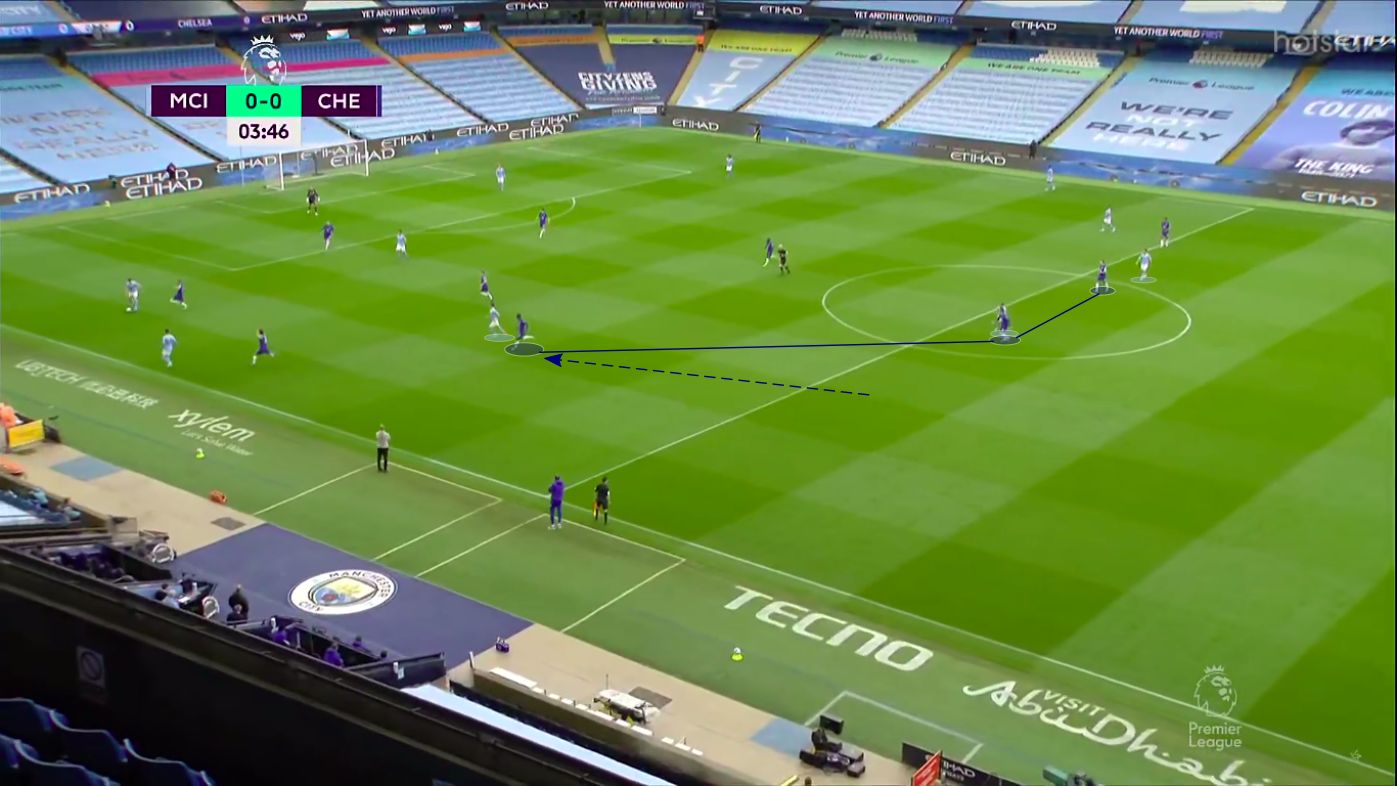 This was, of course, a risky move, as losing even one of these attackers would leave a lot of space behind for them to run into. 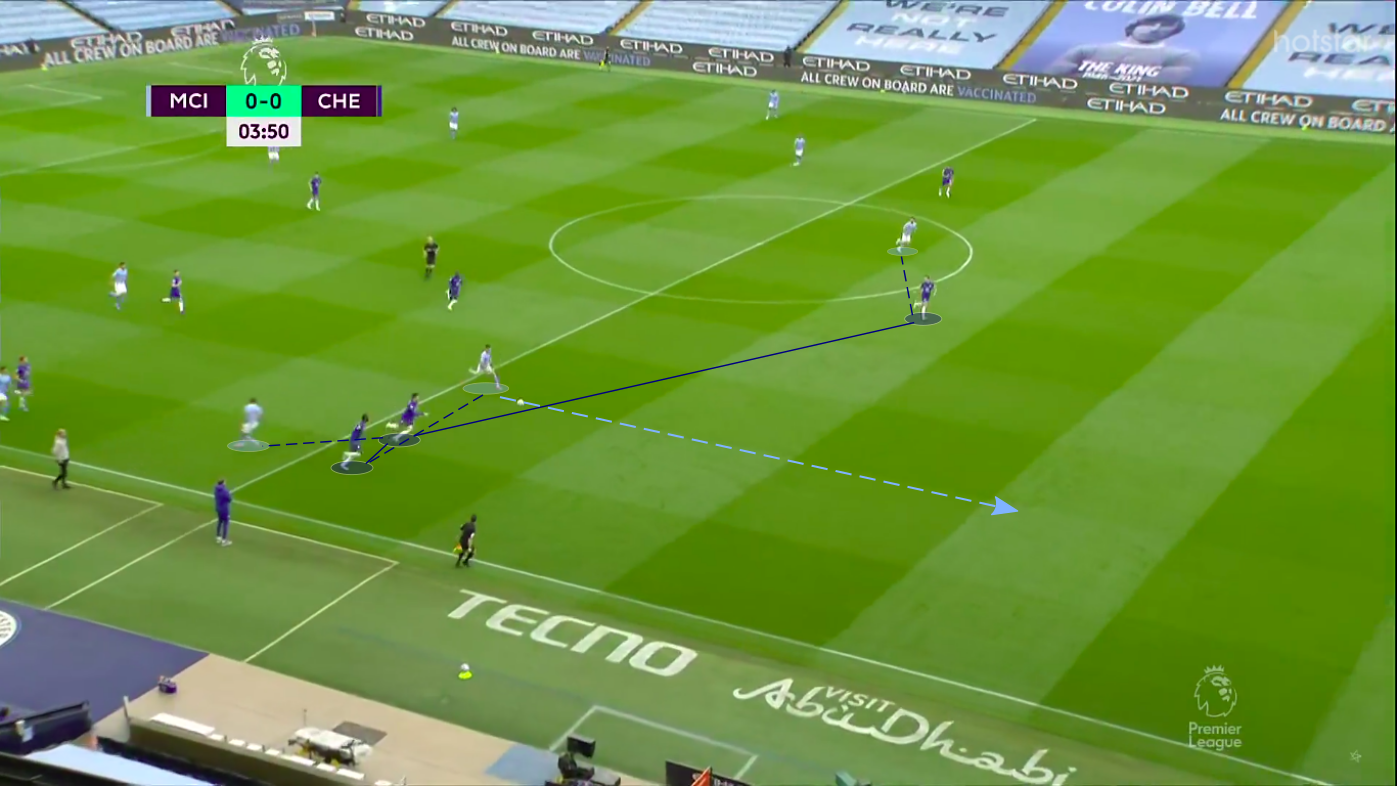 This man-marking was precisely what caused Chelsea to concede in the first half. Rüdiger was dragged out of position by Torres’ backward movement, vacating space for Jesus to make a run into and chase a long ball. 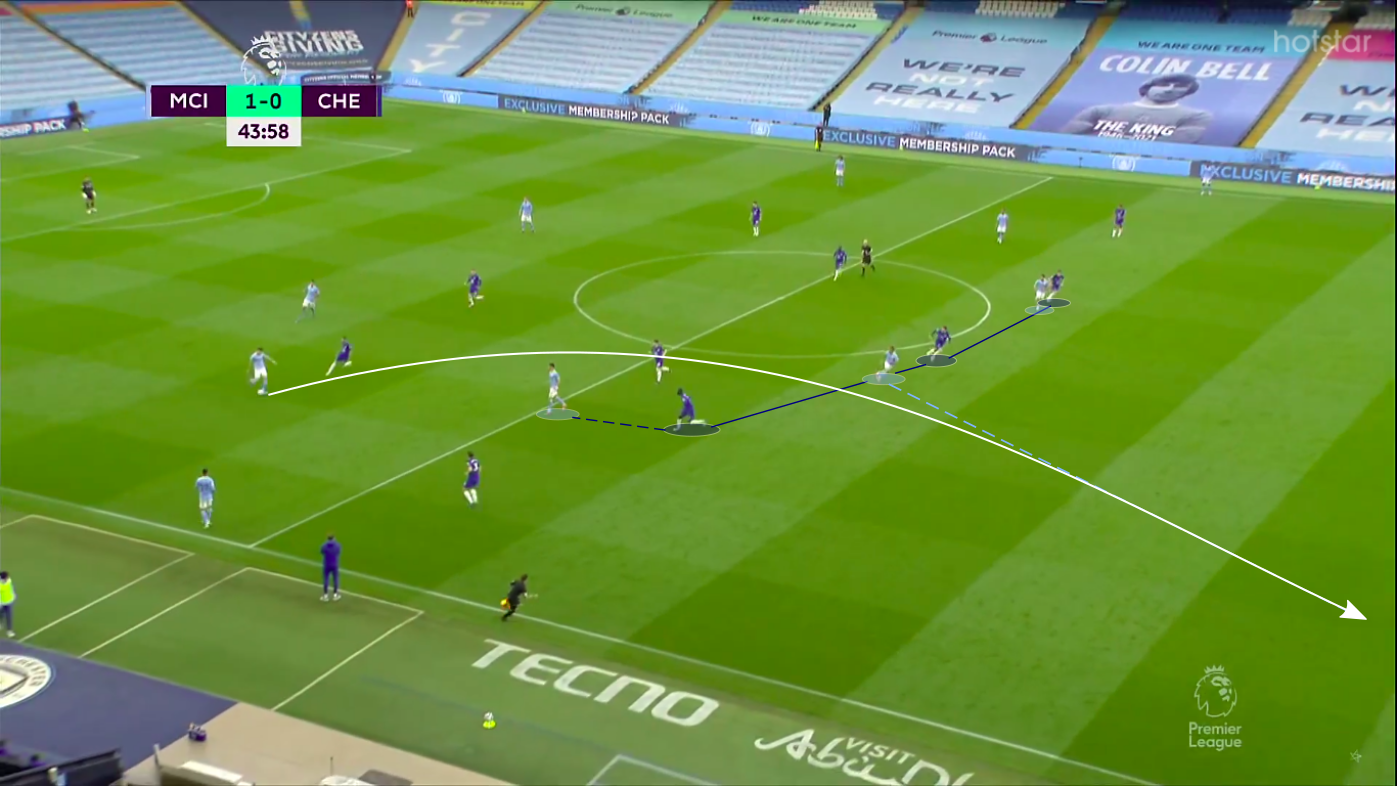 Christensen strained every muscle to try and get there first – perhaps excessively so because he seemingly pinged his hamstring in the process – but he failed to do so.

Azpilicueta then was left with no choice but to square it to Agüero, who somehow failed to control it properly with his first touch, but he was left off as the incoming Sterling made sure of poking the ball home. 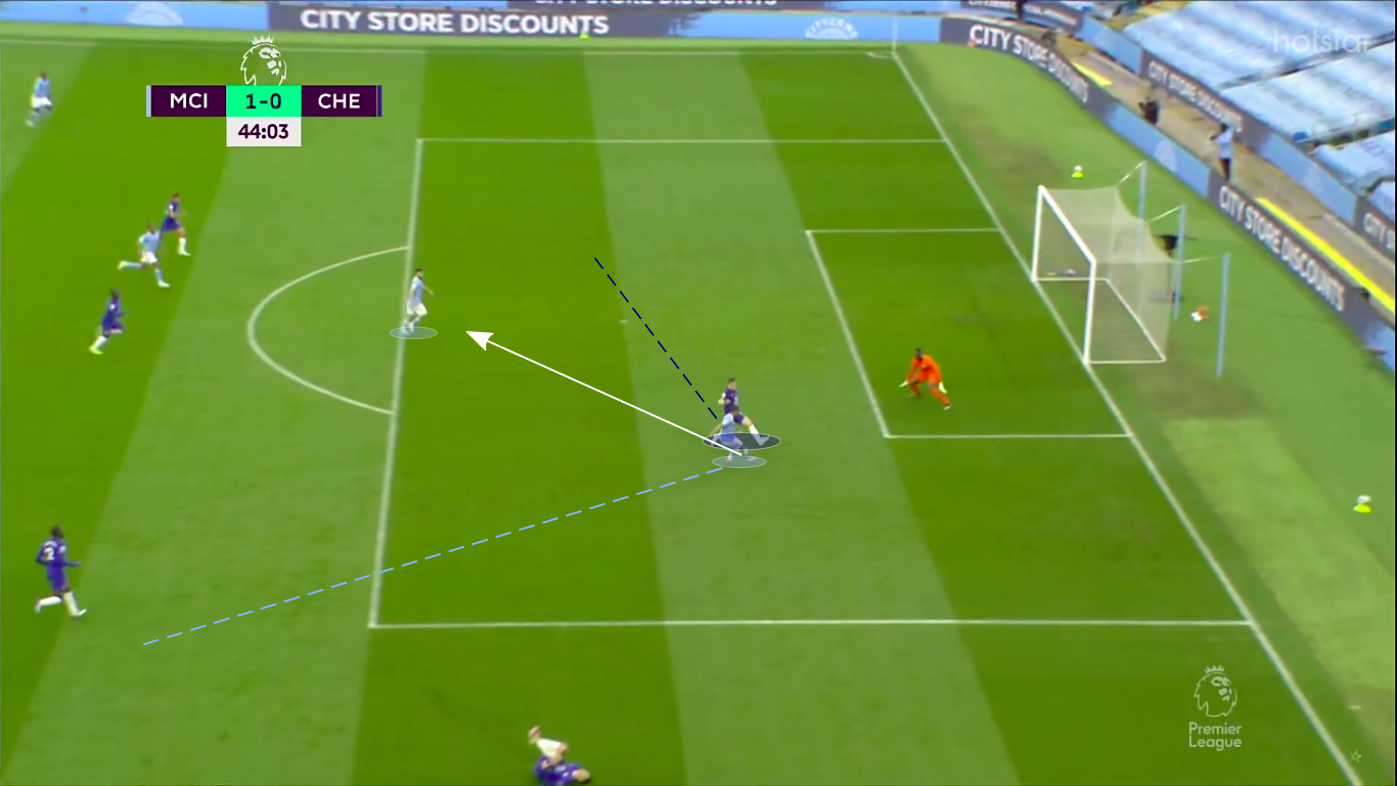 Pressing too high hurt City in the FA Cup semi-final, so this time they were happy to deploy a mid-block speared at the edge of their attacking third in an intriguing 5-1-3-1 shape.

The wing-backs dropped alongside the back-three, with Rodri operating alone in midfield and Sergio Agüero on his own up front. 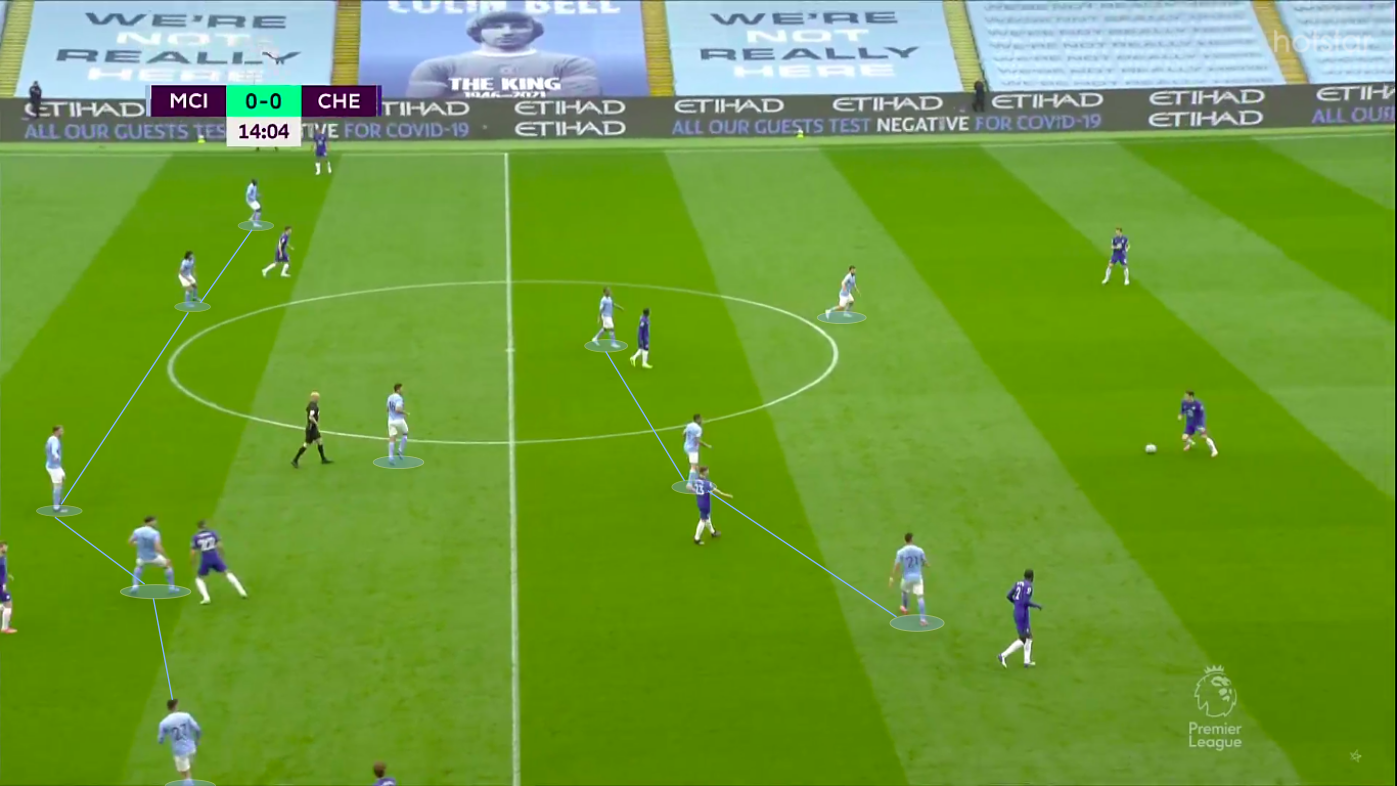 As Chelsea started to encroach into the opposition half, City dropped into a 5-3-2, as Jesus pushed up alongside Agüero while Torres and Sterling stayed in midfield on either side of Rodri. 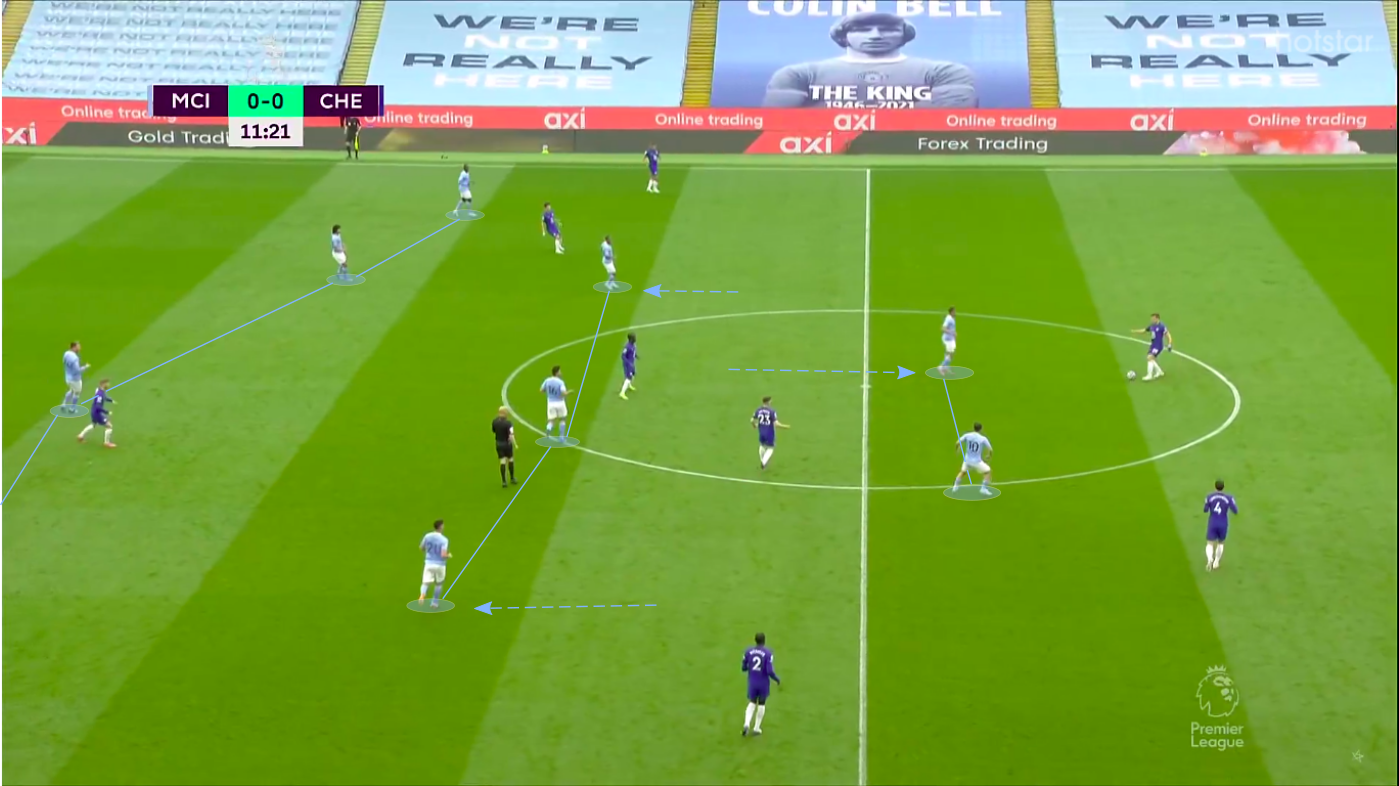 There was a lot of man-marking going on as well, as the wide centre-backs (Rúben Dias and especially Aké) followed Chelsea’s wide attackers (Hakim Ziyech and Christian Pulisic) quite closely, even if they dropped deep into their own half. 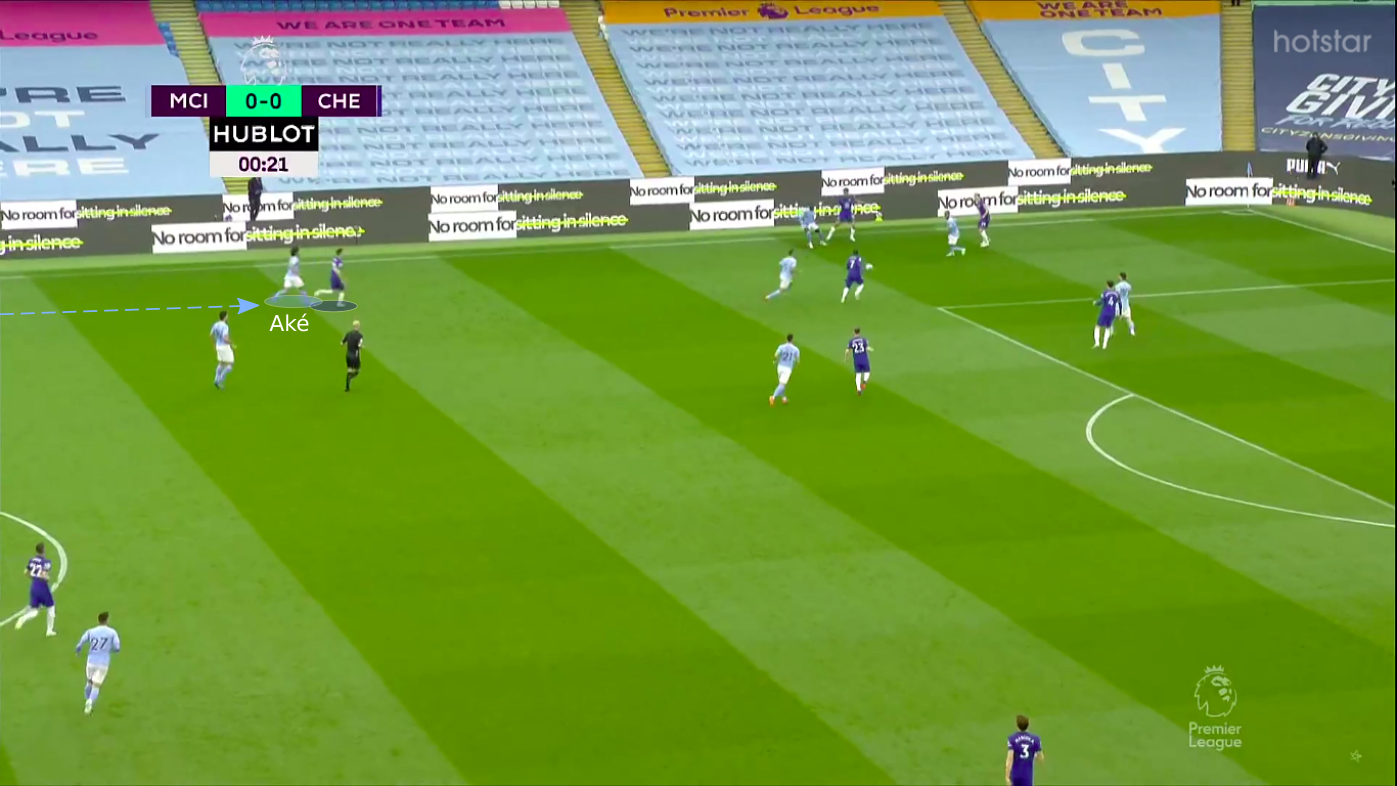 Chelsea’s threat from the wings

As is evident, City’s defensive shape was quite centrally compact, so Chelsea had to hit them out wide, which is where 80% of their attacks came from.

As the left-sided attacker, Ziyech was often able to get the better Cancelo, who had a relatively sub-par day from a defensive standpoint.

Timo Werner was more than happy to work his socks off with runs into the channels, so he was often the recipient of Ziyech’s through balls on this side. 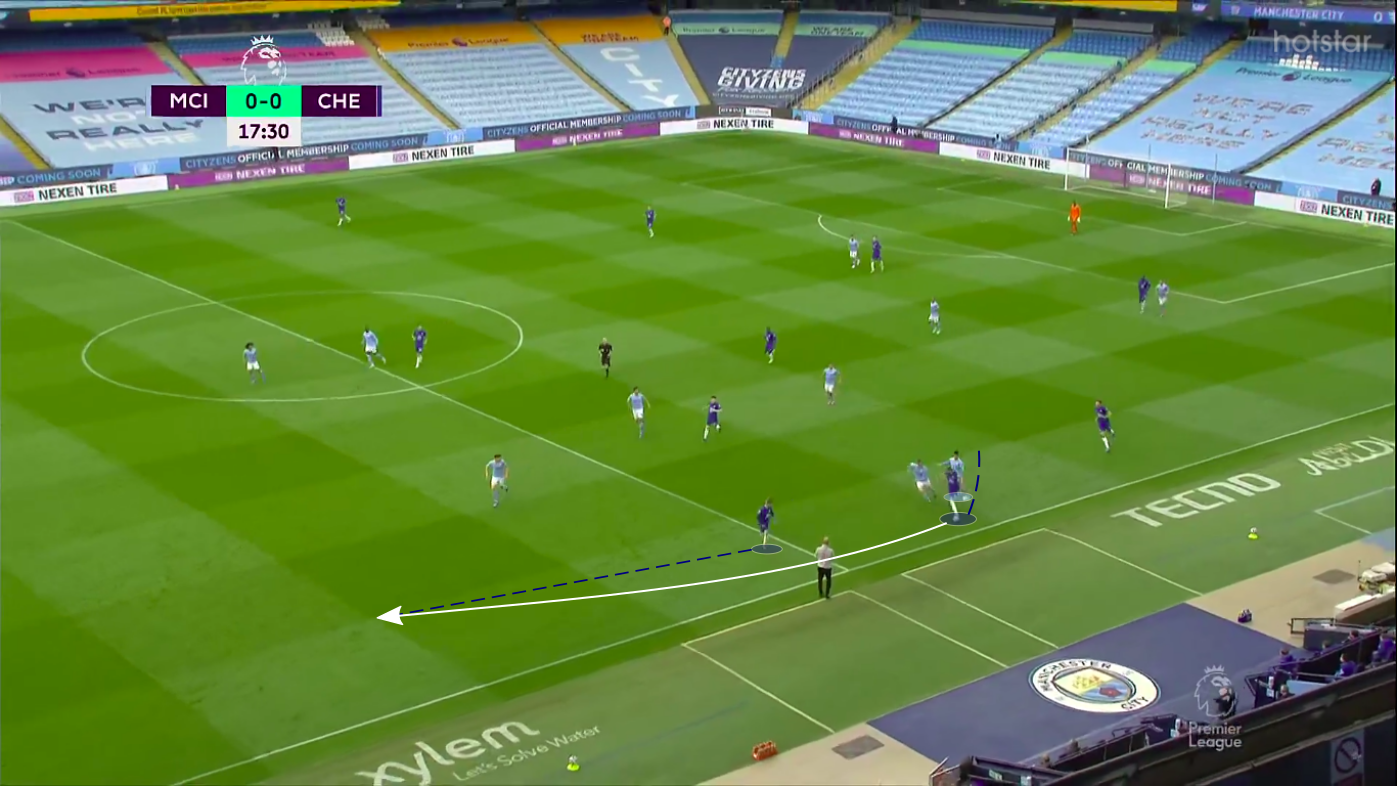 In other cases, Ziyech did not even need to get past Cancelo to find Werner’s runs. 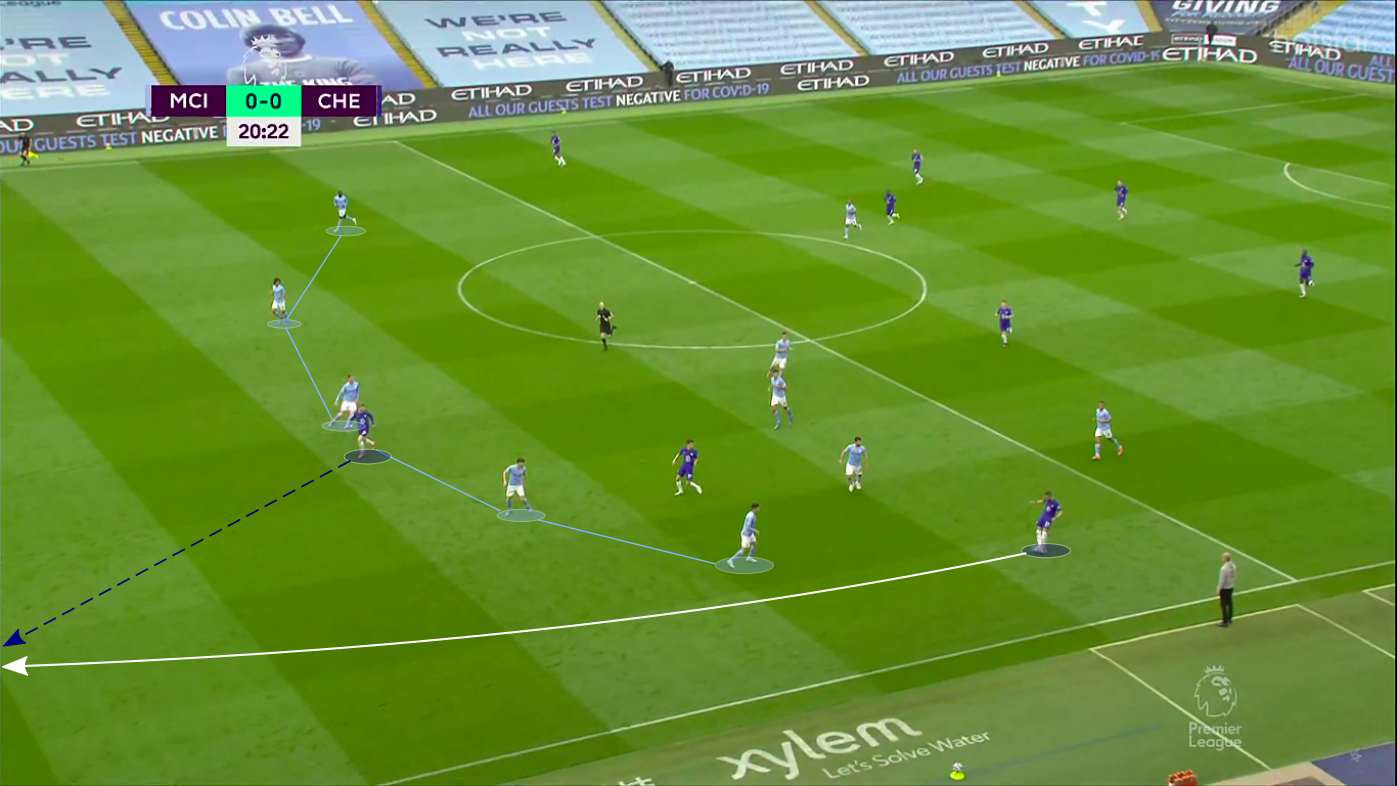 In the second 45, Chelsea’s threat mostly came from the right flank through Reece James. The English full-back had to do plenty of defending in the first period as Mendy pushed far up for City (as previously discussed), but the tables were turned in the second half.

Of course, the French full-back is not renowned for being the most defensively sound, so he did face a fair few problems against his English opponent. 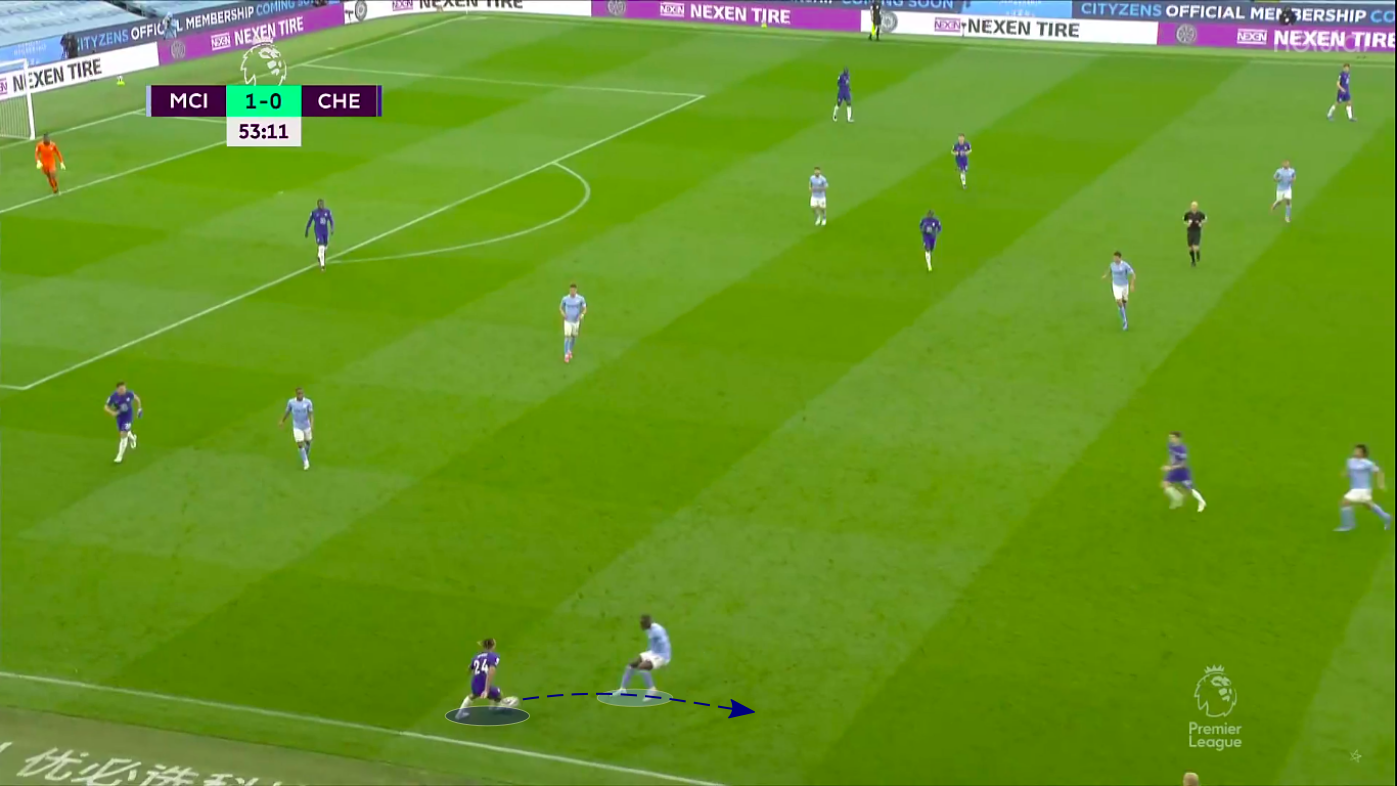 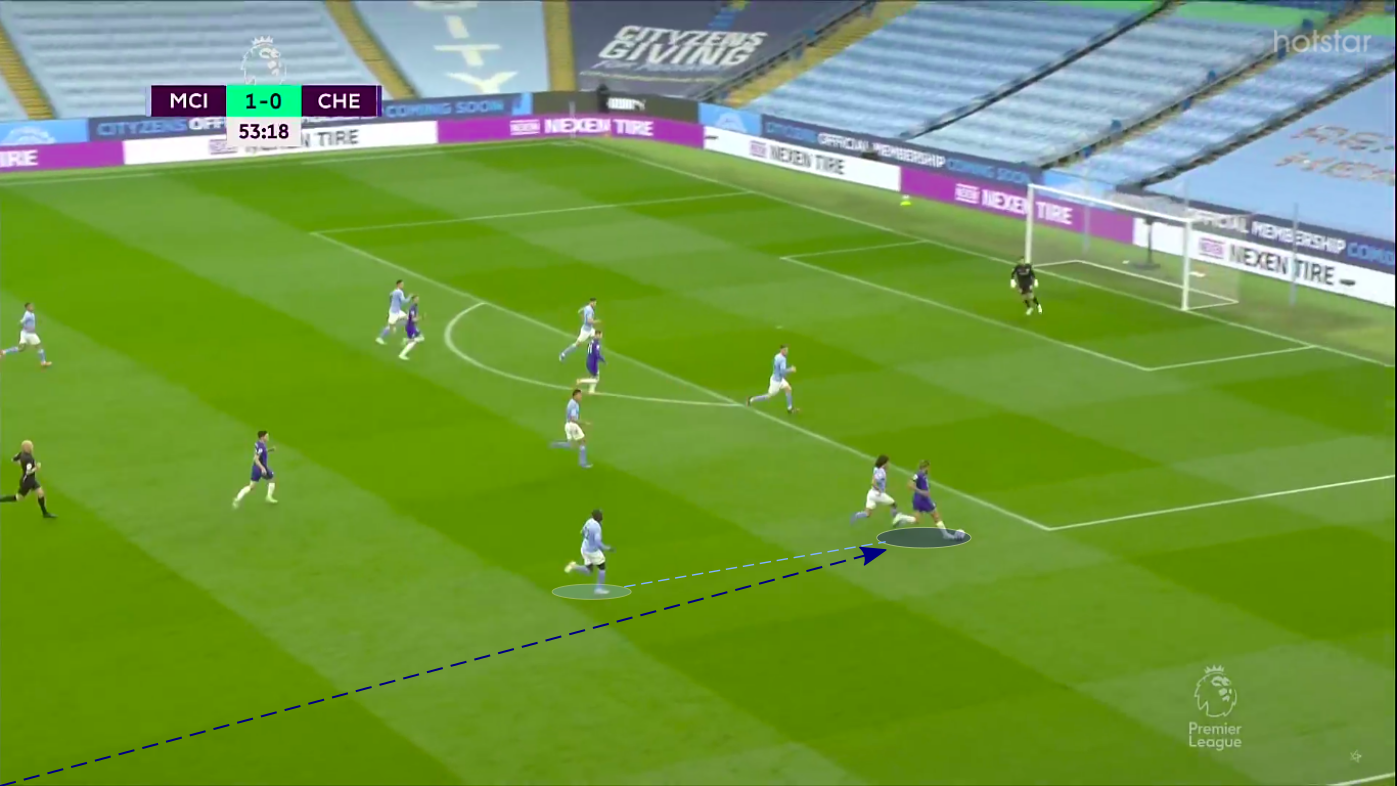 James’ end-product was not bad either. Unfortunately, his teammates either just missed his deliveries or were caught offside when they got on the end of them. 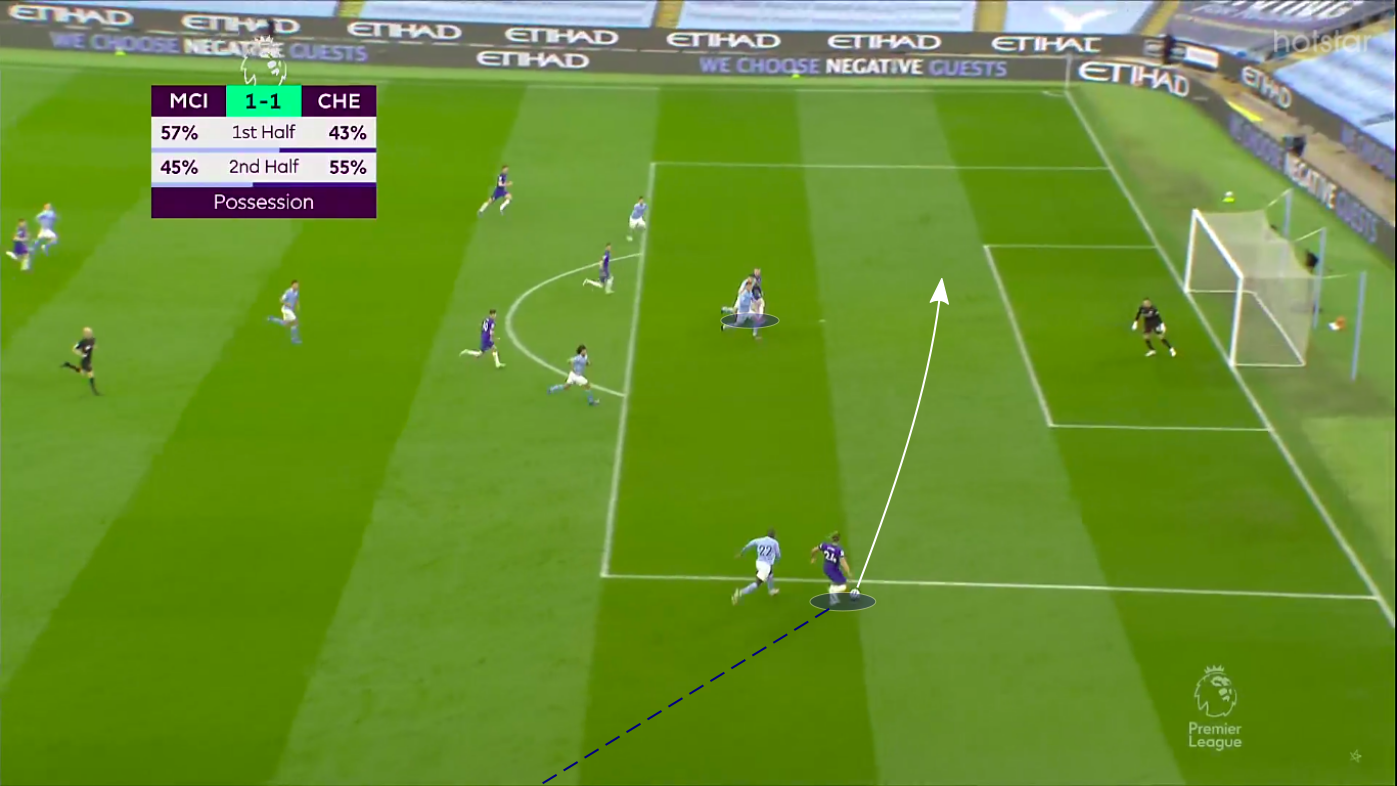 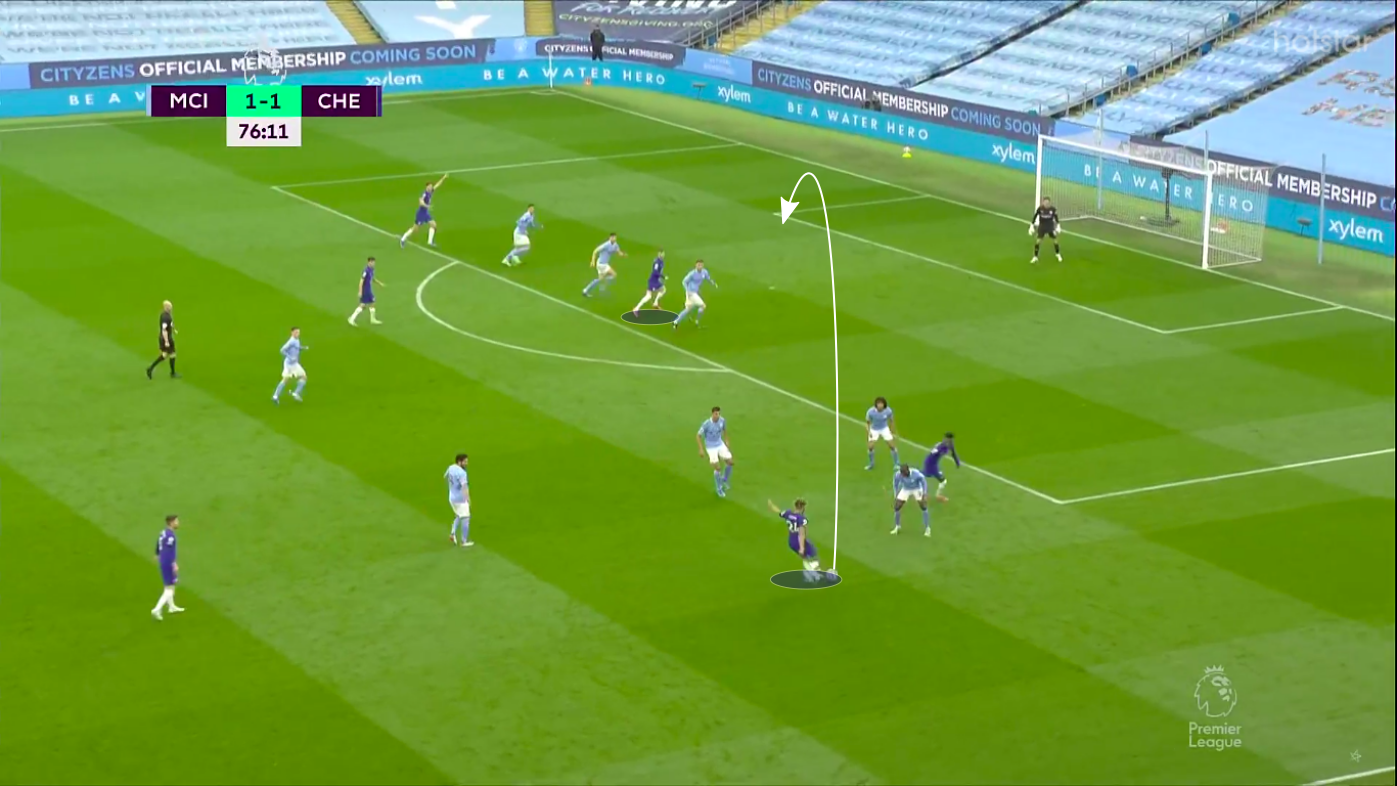 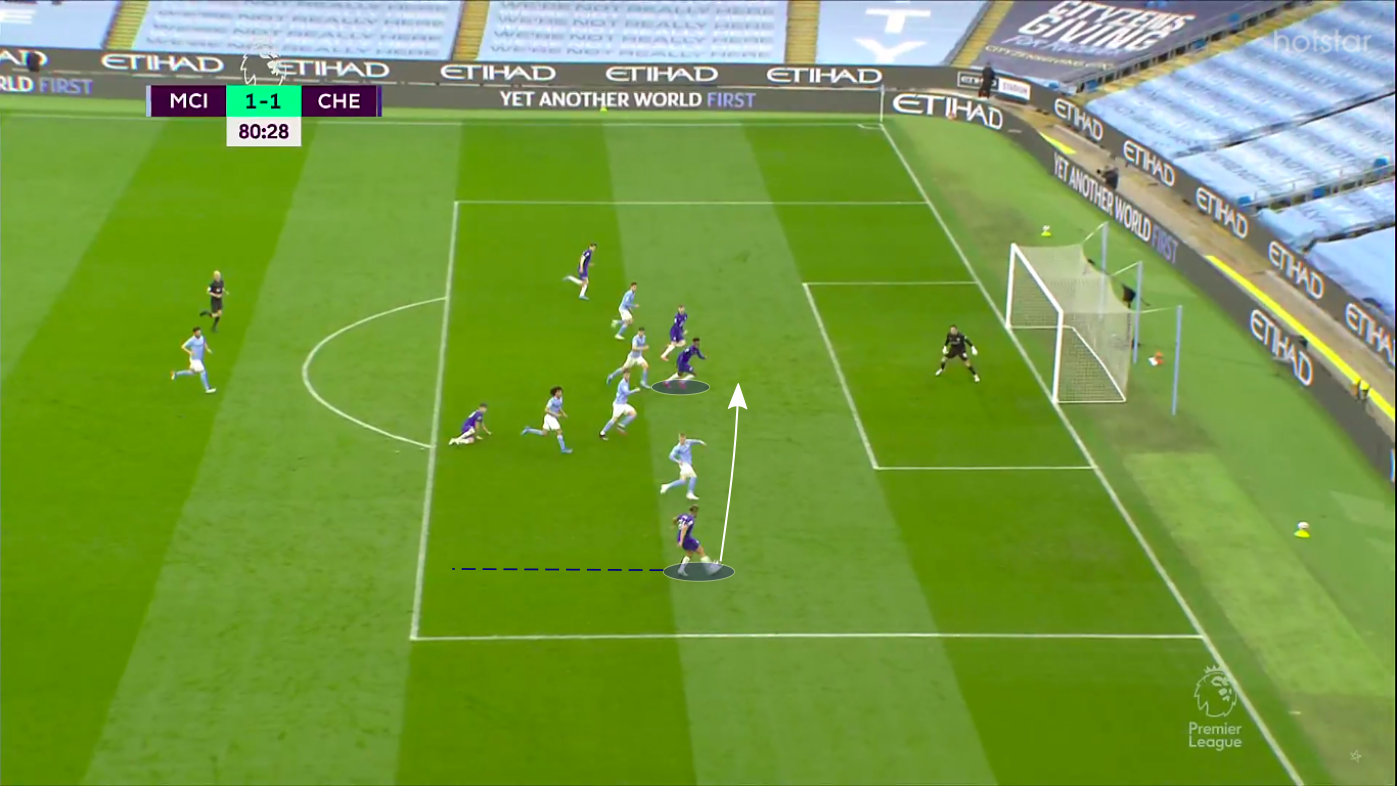 Ziyech’s movements at the edge of the box

Ziyech was the man who netted the goal to eliminate City in the FA Cup, and he was at it again in front of goal for Chelsea. The Blues managed five shots on target, and their Moroccan forward was responsible for three of those.

Thomas Tuchel’s side have typically used a front-five in possession with their three attackers and wing-backs, but this time, it was more of a (3-2-)1-4 in the attacking third, as Ziyech often looked to drop back into the space between the City lines.

This afforded him the time to receive, turn, and pick his spot to shoot. 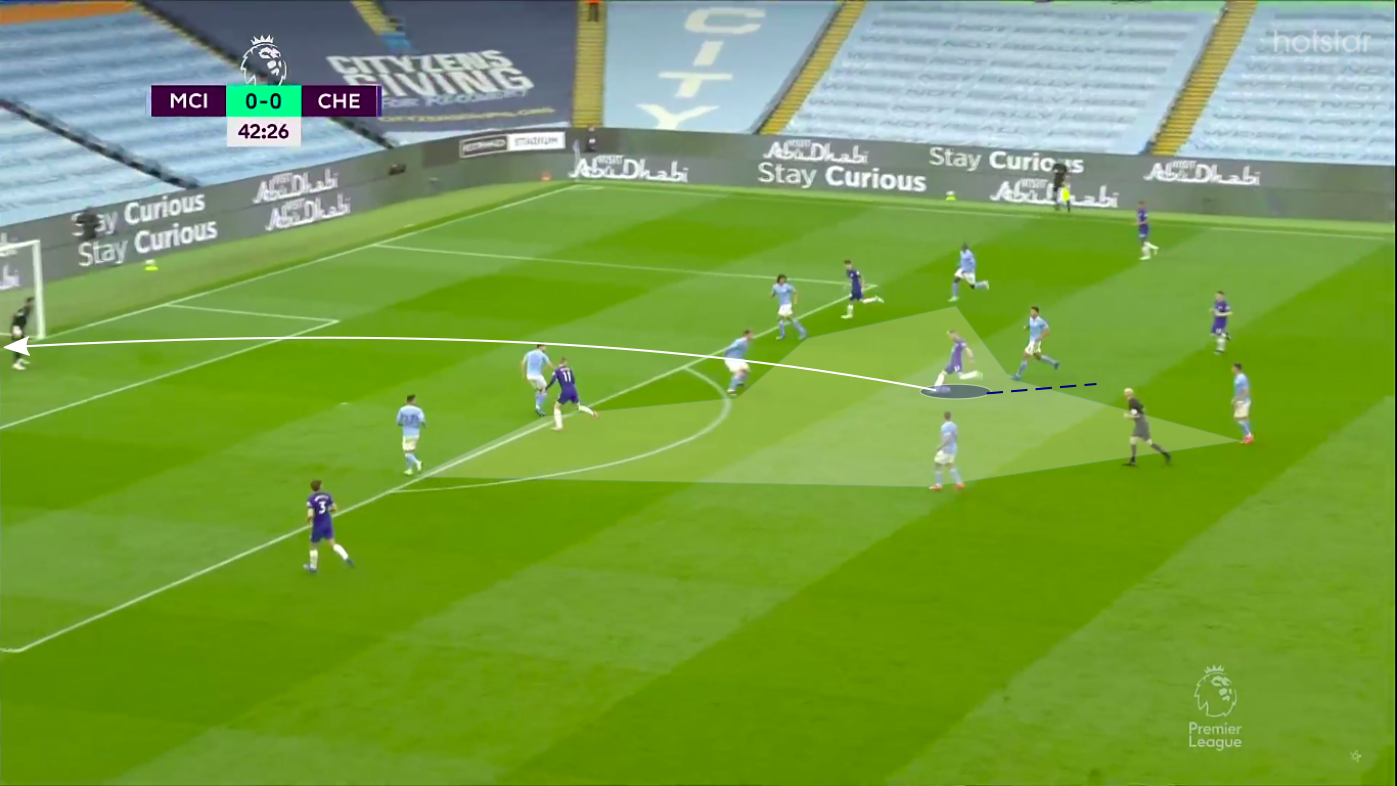 Even in transition, he looked to receive the ball after dropping away from the City defence. 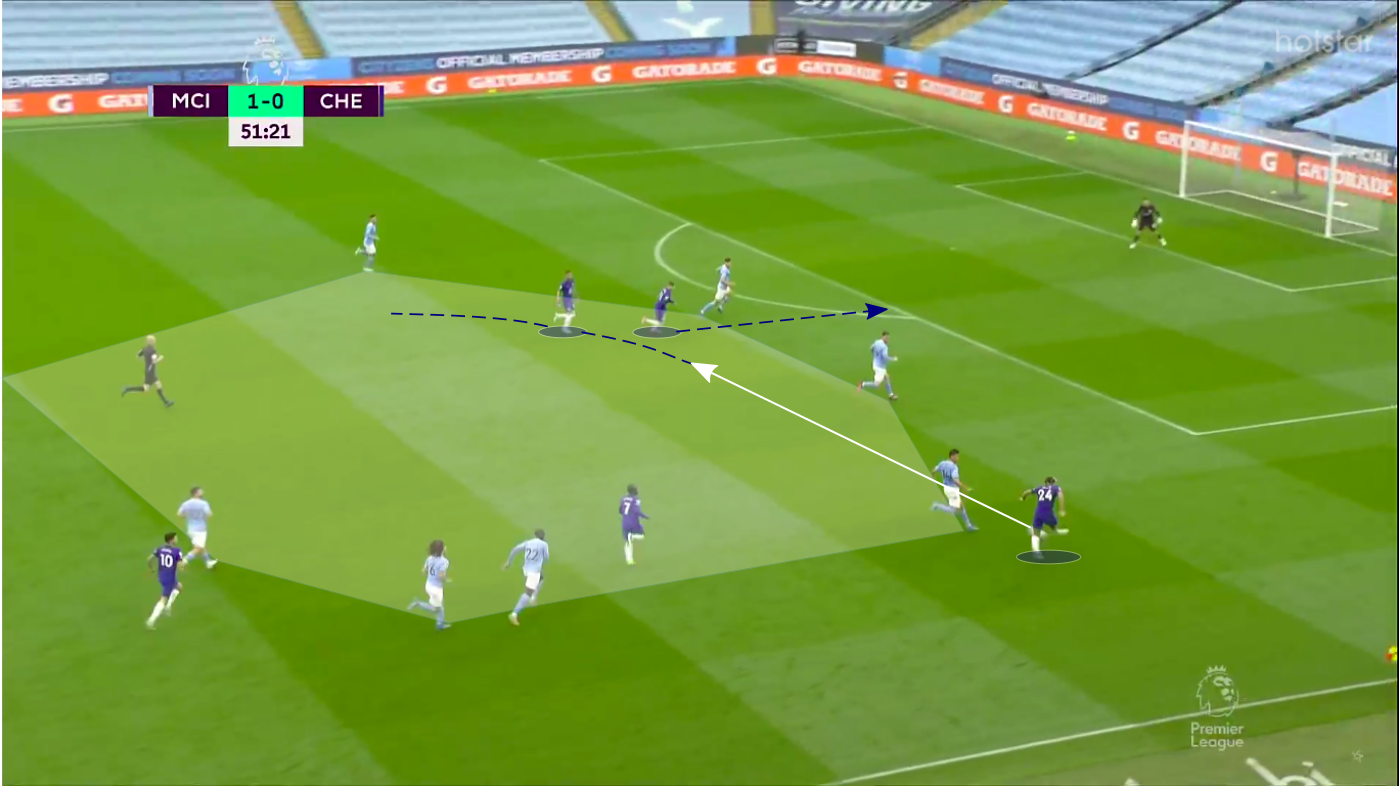 Again, the result was similar – time and space to shoot. 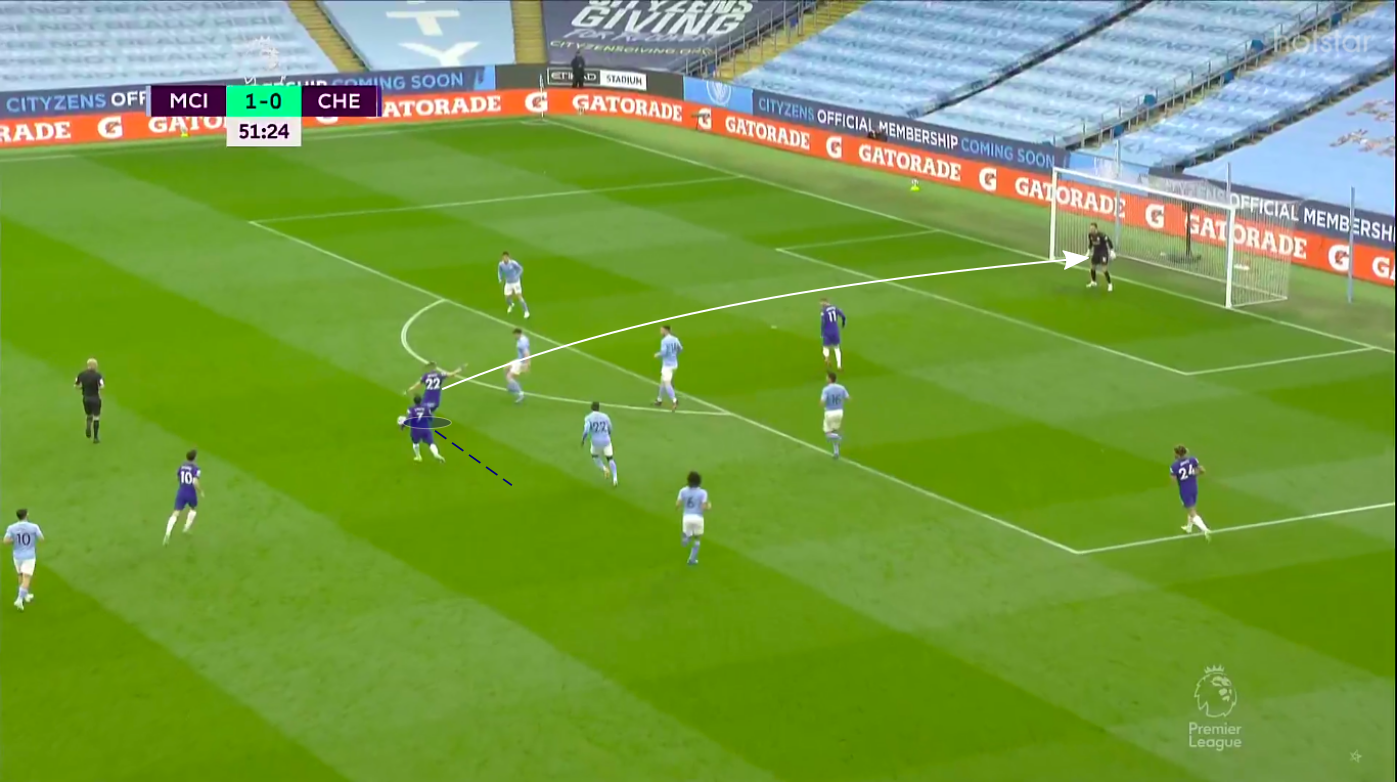 This was exactly how he got his goal, as Chelsea made the most of a high turnover. 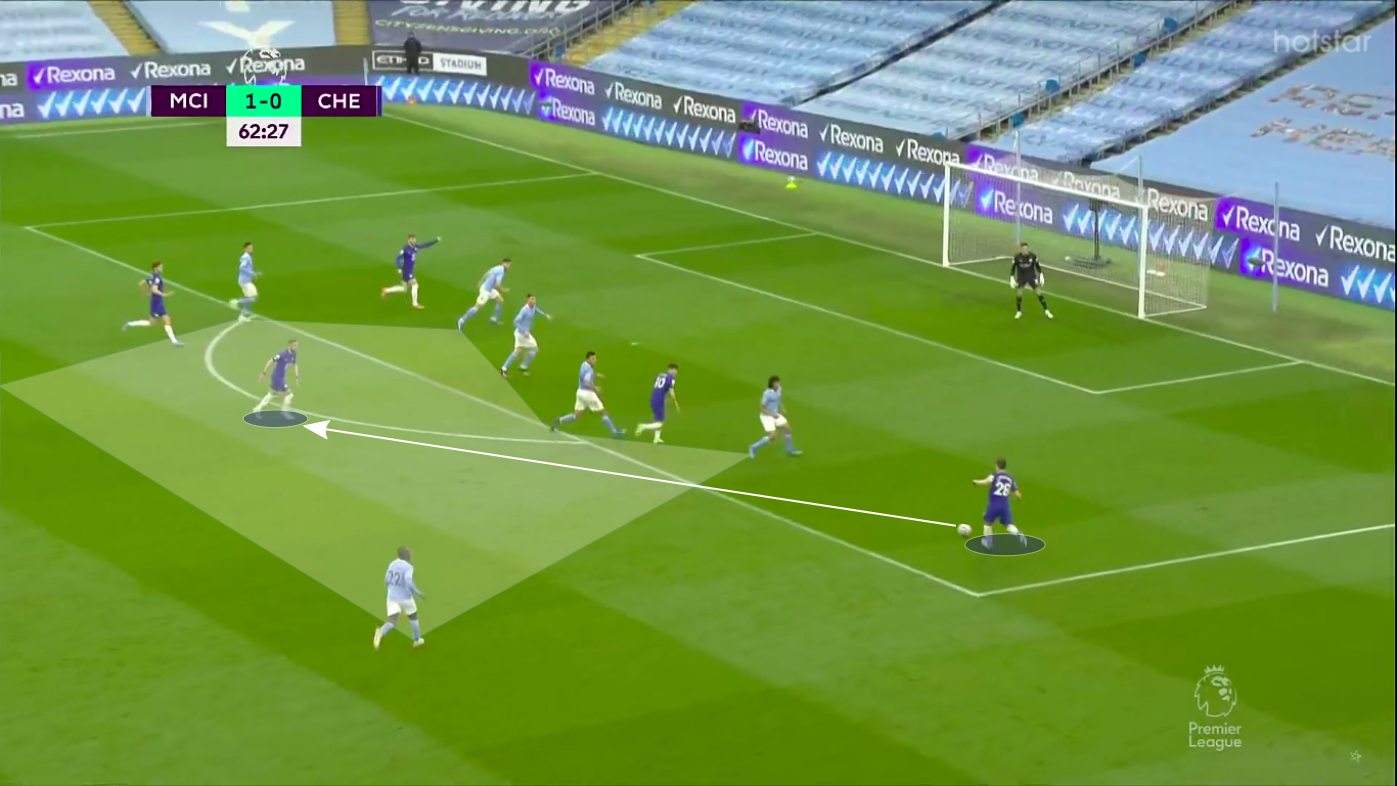 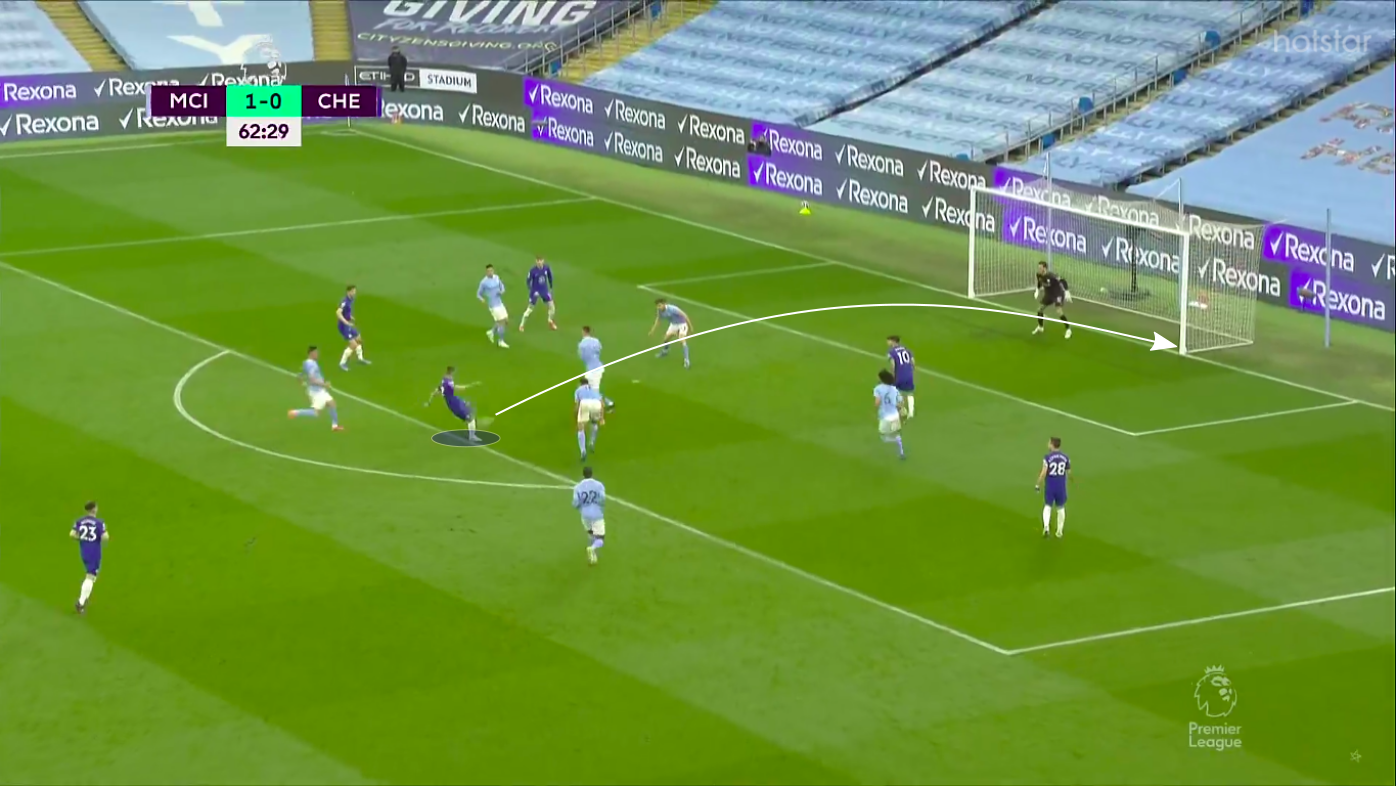 While it is hard to say that Chelsea thoroughly deserved this win as they failed to create any clear-cut chances, they were arguably the better side in this match as they looked a lot more comfortable both on and off the ball – especially in the second half.

This win not only strengthens their top-three ambitions in the Premier League, but it will also massively boost their confidence ahead of the Champions League final as they have beaten City in both their meetings with Tuchel at the helm.

Of course, the manner of the defeat and missed chances in the process will hurt City, but they should not be too disappointed.

Their Premier League title success has merely been delayed at best (they may already have it by the time they step on to a Premier League pitch again as their local rivals Manchester United have an impossible three games in six days before that).

They are yet to show their best hand to Tuchel as this team had nine changes and the FA Cup side had eight. In both cases, Chelsea were not using their best 11 players either, but they did stay loyal to their 3-4-2-1 system, which Guardiola did not do in either case.

Either way, that clash is shaping up to be an even bigger battle than it usually would be, and it will undoubtedly serve up a tremendous climax to a once-in-a-lifetime season of European football.