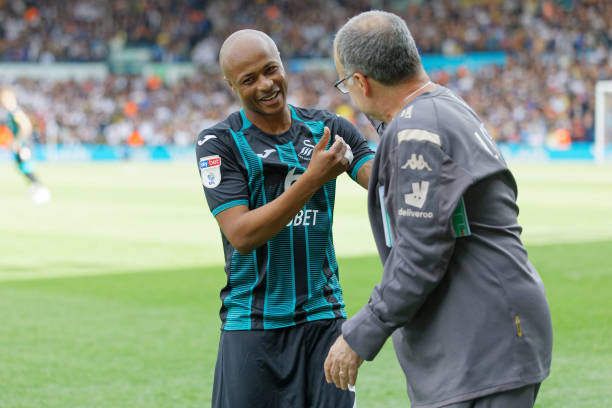 Both spent a couple of seasons together at French side Marseille where they forged an excellent working relationship, and the Ghana international was full of praises for the Argentine when commenting on the transfer speculation.

“I am not aware of that. I don’t know anything. I don’t have any comment,” Ayew told Canal + (via GFFN) when asked about the rumours linking him with a move to Leeds.

“I appreciate Marcelo Bielsa enormously. He is an incredible manager. We had a very very strong relationship at Marseille. And there you have it. That’s all I can say. But in terms of transfers. There will be more things that will be said, there have already been things that have been said.

“Like ‘he’s going there, he’s going there. He’s going to the Premier League, etc.’ I am not thinking about any of that. I am concentrating on what I have to do here. I receive so much love from the stadium, people, from the city, from the club, I am enjoying myself. I feel good.”

Leeds have scored 36 league goals in 23 appearances and are one of the huge favourites to get promoted, but they need to finish the campaign strongly, and a few quality additions to their attacking ranks next month could help their cause.

At 30, Ayew brings loads of experience to the table, and with eight goals and four assists in 21 games to his name, he definitely can help improve Leeds in the final third.

Swansea are already bracing themselves for January bids for the versatile forward, and it will be interesting to see if the Elland Road outfit will join the race.

Ayew wouldn’t mind a reunion with Bielsa given his latest comments, and both could be in the English top-flight next season. If that will be in the same team remains to be seen.