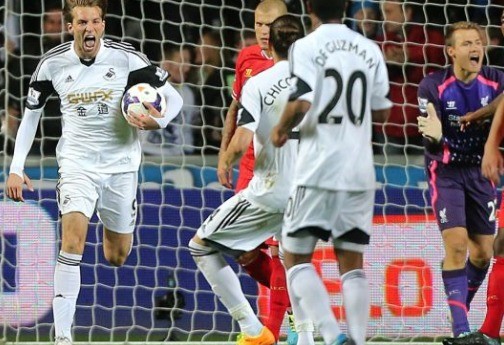 Liverpool’s winning streak ended last night, after the Reds suffered a 2-2 draw against Swansea at the Liberty Stadium. Despite conceding an early goal, the Reds strongly bounced back and lead 2-1 at half time, but a second half goal from Michu leveled the tie in the end.

Here are my two-penny worth four observations:

Not a bad result for the Reds

Ask Liverpool fans, and they’ll take a draw against Swansea (away) with a glee. However, at the stroke of half time when Liverpool took the lead, it gave a feel that the Reds are on the way of bagging yet another three-pointer. Credit should go where it is due. Swansea fought back brilliantly in the second half and fully deserve to get something from the match. Still, top of the league, gives a healthy feel, isn’t it?

It was Jonjo Shelvey’s day. He was pumped up for this tie, as if he had a point to prove. Having assisted 3 of the 4 goals scored and scoring the 4th one, Shelvey was clearly the star of the show (albeit for both teams). But Brendan Rodgers should thank him after the match for his immense contribution (to Liverpool) in the game.

He was directly involved in all the four goals. He scored one (the opener) and was involved in three assists. Yes, you read it right, for those who haven’t watched the game. For the first Liverpool goal, he did a Gerrard-esque back-pass to Daniel Sturridge and the England international didn’t need a second invitation to score.

Likewise, Victor Moses picked up a poor pass from Shelvey and scored a brilliant solo goal. However, there was one final chance of atonement for the young lad, as a brilliant run from him and equally good header-cum-assist found Michu in the box and the Spaniard slotted home with great aplomb.

Sturridge was getting all the attentions at the moment for scoring Liverpool’s 4 goals out of 5 this campaign, while Coutinho’s impact at times didn’t get noticed this season.

Liverpool looked a complete different side after the young Brazilian left the pitch picking up a nasty shoulder injury. The creative spark was out of the window, the Reds just chased Swansea players like shadows while Iago Aspas (came on as sub) looked like a fish out of water in that no 10 role. The Reds without the Brazilian could make only 4 (yes only 4, in over half an hour) successful passes, compared to 48 with him. Stats don’t lie sometimes.

Mamadou Sakho needs to adapt quickly. The youngster from PSG who is the most expensive defender in the club’s history didn’t enjoy a perfect debut at all. I have seen him play on few occasions in the Champions League, and found he is a very good player with the ball on his feet. Yesterday, we saw, how composed and confident he was in close areas with the ball, passing it safely to the near man.

But, where he needs to improve is his decision making. At least, in 3 cases yesterday, he went out quickly from his area (leaving his position) and tried to intercept a pass with a lunge (almost Jamie Carragher style) and in all the occasions, he missed the ball.

I am not criticizing him too much as one need to understand that he was playing his first match only in a different league. He still needs to adjust to the new system, new methods, new coaching style, language, nature of the league etc. The signs are there for him to excel and he will improve with every game he plays.