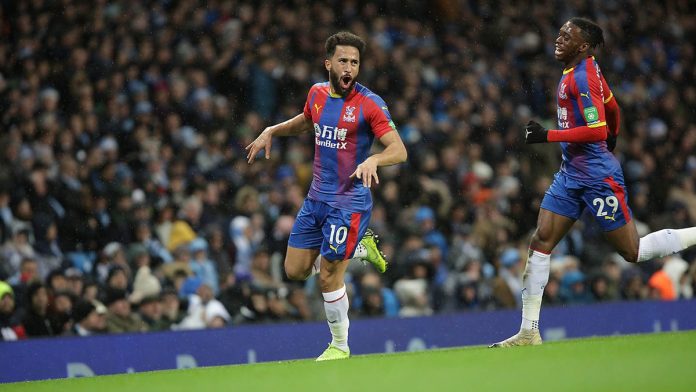 The victory lifted Palace to the 14th place, but most importantly Man City now trail four points behind Liverpool in the title race.

Parish has hailed the win as a “brave performance”, and said it is hard to single out any particular player for praise. However, he enjoyed the goal from Andros Townsend.

Brave performance today, huge congratulations to Roy, Ray, the players and the travelling fans. Hard to single anyone out… But that goal tho ?! Could it be the GOS isn’t against us for… https://t.co/OvpPA5j14L

After Liverpool won 2-0 on Friday night, it was time for City to respond. Ilkay Gundogan gave City the lead from Fabian Delph’s cross. However, eight minutes later, Jeffrey Schlupp equalised with a fizzing angled drive into the bottom corner.

Townsend scored the contender-for-goal-of-the-season with a fabulous volley from 30 yards out to give Palace the lead at the break.

Palace scored again after the break. Luka Milivojevic sent Ederson the wrong way with his penalty to give a healthy 3-1 lead. Kevin de Bruyne reduced the deficit but Palace held on for a crucial victory.

The visitors had only 22% of possession, and had registered only three shots on target during the match.