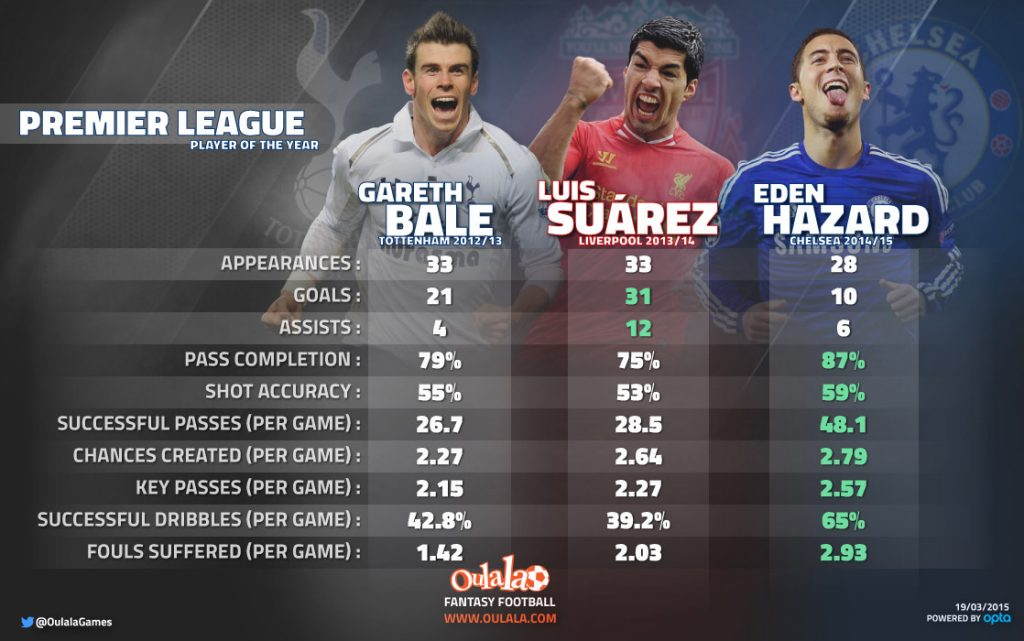 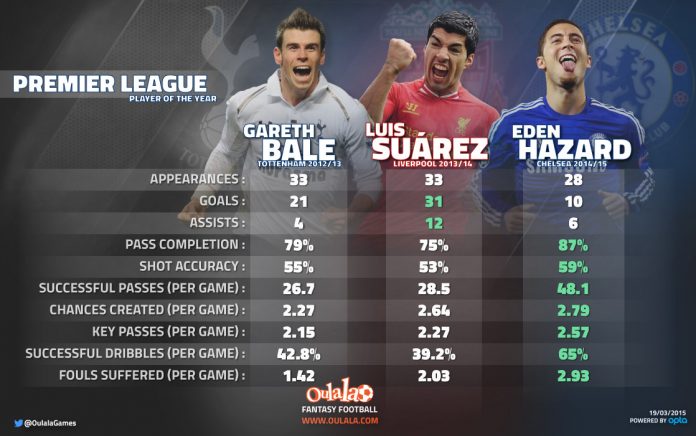 Have the Player of the Year awards already been sewn up? The stats suggest so.

Gareth Bale was Tottenham’s shining light in the 2012/13 campaign and his performances were rewarded handsomely. The Welshman picked up the PFA Young Player and Players’ Player of the Year as well as also taking the FWA Footballer of the Year. This was quickly followed by a £78 million move to Real Madrid the same summer.

Luis Suárez was the catalyst to Liverpool’s title challenge in the 2013/14 season. The Uruguayan was the Premier League’s stand out performer which was recognised when he collected the PFA Players’ Player of the Year and the FWA Footballer of the Year. Barcelona were quick to pounce, taking him to the Nou Camp in a £65 million deal.

This season Arsenal’s Alexis Sánchez’s started his Premier League debut campaign with a bang after his switch from Barcelona, however recently his form has taken a dip. Manchester City’s Sergio Agüero has put in some big performances this term but an injury over the busy Christmas period has appeared to slow the striker down. While, although 21-year-old Spurs sensation Harry Kane has enjoyed an excellent breakthrough campaign, he didn’t really get going until November.

One man however has remained consistent throughout, Chelsea winger Eden Hazard. With Gareth Bale and Luis Suárez performing to such a high level that saw a host of individual honours and big money moves to La Liga giants Real Madrid and Barcelona, Opta-powered fantasy football game Oulala took a look at how Hazard has compared against the pair during their seasons.

Liverpool’s Luis Suárez wins the goal scoring honours, and by quite some distance with 31 goals in his 33 games last term, compared to 21 from Bale in 2012/13 and 10 from Hazard so far this season. Suarez also leads for assists with a total of 12. Hazard’s 6 assists have already surpassed Bale’s tally of 4 two seasons ago.

However, that’s as far as Suárez gets in this contest and Bale doesn’t even manage to get off of the ground. Seven other key areas were assessed and it is Eden Hazard that comes out on top in every single one.

When it comes to passing the 24-year-old leaves the other two in the shade, completing an impressive 87% of his passes and making an average of 48.1 passes per match, over 20 more per game than the others. Hazard has also completed 2.57 key passes per game, again outperforming the other two players.

Despite scoring fewer goals than Bale and Suárez, Hazard in-fact has the better shot accuracy of the trio with 59%. And even though he has fewer assists than Suárez, the Belgian has actually created more chances than both players, 2.79 per game.

The stats clearly show that Hazard’s all-round game is much more advanced than Bale’s and Suárez’s were in their award winning seasons. As soon as Hazard adds a few more goals to his locker the comparisons will likely move up a notch against the likes of Messi and Ronaldo, he really is that good.

Real Madrid or Barcelona Eden? The choice is yours.