Regular readers of Soccerlens, must be knowing, we have followed this William Carvalho transfer saga with close interest.

Just to recap: Manchester United, Chelsea and Arsenal were the major English clubs that showed interest in Carvalho, who has had a terrific campaign in the Portuguese Liga. The dynamic defensive midfielder was scouted by these clubs on numerous occasions.

But, following the purchase of Nemanja Matic from Benfica in the January transfer window, Chelsea’s interest in Carvalho died down, for obvious reasons. Manchester United scouts continued following him with reports in English media suggested that the Red Devils have agreed a deal, which has been denied by the Portuguese press.

Inter Milan and several other Italian clubs were linked with the player but we all know, none of them can pay his buy-out clause. In fact, recent reports suggest Inter offered €15m only for the player, which was rejected outright.

Sporting want the midfielder to stay for another season at the club, as they’ll play Champions League football next season. The club’s sporting director Bruno de Carvalho insists the player will only be sold if his €45m buy-out clause is met. 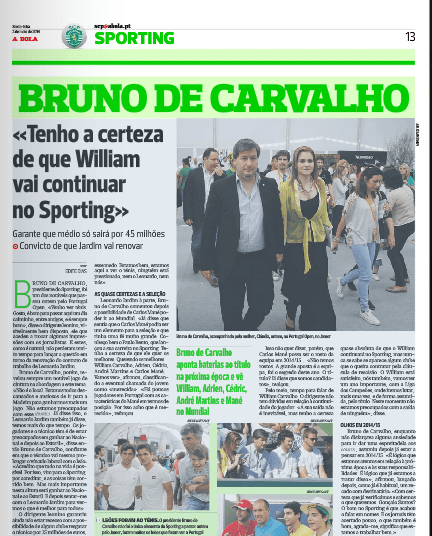 He said as quoted by A Bola: “William’s exit isn’t inevitable, I’m almost sure he will continue at Sporting but you never know whether some club will show up and beat his buyout clause.

“William is happy at Sporting and we’re facing another important year, with the Champions League, and fighting for the title in Portugal. Right now, we’re not worried about anyone exiting the club.”

However, such lines are repeated over and over again this season, which forces us to think, whether it is a ploy from Sporting to entice a €45m offer. And needless to say, only Manchester United can pay that amount of all the clubs linked with the player.