Chelsea were comfortable 3-0 winners over Aston Villa in the Premier League on Saturday to maintain their five-point lead over defending champions and further extend their lead over Arsenal and Liverpool.

José Mourinho admitted his side’s dominant performance where they had the game sewn up on the hour and controlled possession throughout the game is a real bonus heading into a UEFA Champions League game three days later.

Sporting Club were held 1-1 at home by FC Porto on Friday night after leading at half-time. The visitors were really poor in the first half before being much the better side in the second half who came close to taking all three points.

The Portuguese club have actually drawn four of their six games by the score of 1-1 and won the other two. They also drew 1-1 in Maribor in their Champions League opener.

Ramy Rabia is the only player unavailable to head coach Marco Silva.

The visitors only have Ramires injured although are waiting on how quick Diego Costa can recover from playing at the weekend. The Spaniard was only replaced in the final 10 minutes and Mourinho isn’t confident his player can do two games a week with his dodgy hamstring.

Didier Drogba is experienced in this competition whilst Loïc Rémy got a little run out at the weekend. 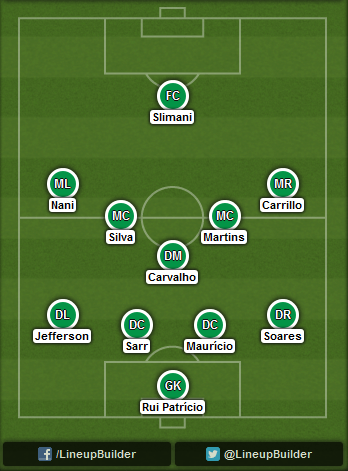 This is our best guess to how Sporting will line up at home to Chelsea. Pack the midfield with the two wingers and striker Islam Slimani as good attacking threats. This team doesn’t score too many goals in truth. 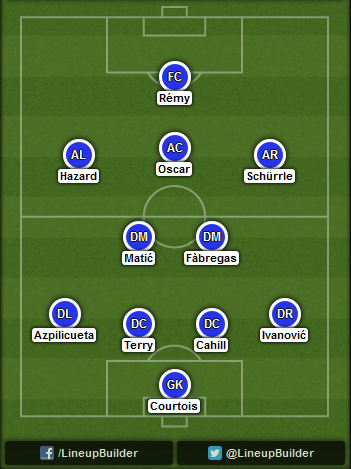 José Mourinho tells us Diego Costa can’t do two games in a week so we think it’s between Loïc Rémy and Didier Drogba to start this one up front. The French striker got a little run out at the weekend. The defence remains the same but it wouldn’t surprise us if Filipe Luís gets a game at left-back. Chelsea have 24 hours extra rest than Arsenal before the weekend so we’d think any players Mourinho wants to rest will happen in the second half rather than rotating the squad from the start whilst he must be keen to get three points.

André Schürrle vs Jefferson
Willian started the weekend’s game so perhaps André Schürrle can start on Tuesday. The pacey forward makes good runs off the ball as well having an eye for goal. Whoever plays on the right will also be supported by Branislav Ivanović whilst Nani is often on that side of midfield so Jefferson may be without much protection.

Eden Hazard vs Cédric Soares
Chelsea have one of the best forwards in the world on their left wing so expect Eden Hazard to play an important role for the visitors. Sporting have a German-born Portuguese right-back who has only played a couple times this season to try stop him. Cédric Soares will need a lot of help if Hazard is to have a quiet game.

Cesc Fàbregas vs William Carvalho
Arsenal and Manchester United fans have the opportunity to see how one of their summer targets does against a top team. William Carvalho is a highly-rated defensive midfielder who has a massive task on his hand on Tuesday when he comes up against Cesc Fàbregas and co. He’s strong in the tackle and likes to receive the ball when his team are in possession too. How much possession the home side will have is questionable.

Prediction: Sporting 0-2 Chelsea
Chelsea on paper have a much superior side. Despite being unbeaten and having a great home record in Europe of late, I am not convinced Sporting can match up to the Premier League leaders. Chelsea were held at home by Schalke in the opening game so José Mourinho will be keen to pick up three points in his homeland. That means naming a strong starting lineup.