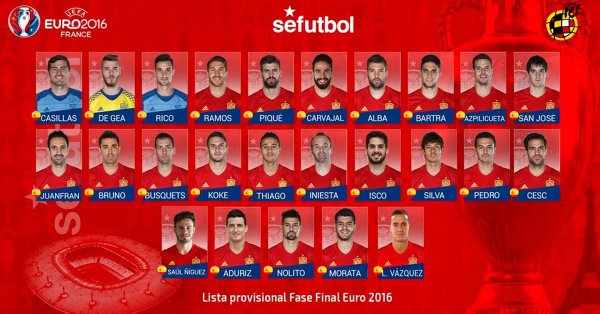 Vicente del Bosque has announced the 25-man Spain Euro 2016 provisional squad on Tuesday for the Euro Championships in France.

There were quite a few controversial decisions taken by Del Bosque. Manchester United’s attacking midfielder Juan Mata, who scored six goals in his last 13 games for his country, has been left out of the squad. Furthermore, Mata has been one of the key performers for United this season, having scored nine goals for the Red Devils and further assisting in eight.

Mata has been one of the key performers for United this season, having scored nine goals for the Red Devils and further assisting in eight, though his dip in performance towards the end of the season may have gone against him.

Having said that Del Bosque has an avalanche of world class attacking players to choose from and give the number of creative midfielders who did make the cut – the likes of Iniesta, Fabregas, Silva, Isco – it comes as no surprise that Mata missed out.

“It pains me but there’s a great deal of competition, and you have to leave feelings to one side,” said Del Bosque on Mata’s omission from Euro 2016 squad.

Costa has had a below-par season with Chelsea despite scoring 16 goals for the Blues. He is also probably not 100% fit enough after suffering a hamstring injury in Chelsea’s 1-1 draw with Liverpool earlier this month.

The Chelsea striker wasn’t picked for the Spain’s friendly games with Italy and Romania in March, and probably Del Bosque wasn’t prepared to risk Costa for Euros.

Likewise, Arsenal forward Santi Cazorla missed a major part of the season through injury and wasn’t picked up either for the Spain squad.

Perhaps the most shocking decision was to exclude Fernando Torres from the 25-man squad. The former Liverpool star is an experienced player who has done remarkably well in major tournaments for his country and has been in good form for Atletico Madrid as well.

Alcacer’s omission from the Spain squad is equally baffling given the fact he was Spain’s top scorer from qualifying rounds. Athletic Bilbao’s 35-year-old striker Aritz Aduriz gets a deserved call-up after a brilliant domestic season while Alvaro Morata remains the only other natural centre-forward.