World Cup holders Spain were comfortably beaten by a vibrant Chile side 0-2 in the Maracanã, with La Roja dumped out of the tournament after just two games played.

Vicente del Bosque’s side were laborious and devoid of any attacking intent throughout the match in Rio, showing no real improvement from their horror performance in the 5-1 loss to the Netherlands last week, with goals from Eduardo Vargas and Charles Aránguiz condemning Spain to a humiliating group stage exit.

The Chile players swarmed all over their Spanish counterparts like wasps right from the word go, with Del Bosque’s side displaying a real lack of urgency and tempo in their play, with the Spaniards needing to win the game to give themselves a genuine chance of progressing to the second round.

But the quality of play was not befitting the players on the ball, with Xabi Alonso particularly awful in the 45 minutes he was permitted to play.

The Real Madrid man was hauled off at half time, having given away the ball which led to the opening goal; a lovely, flowing move involving the outstanding Alexis Sanchez and Juve powerhouse Arturo Vidal, with striker Eduardo Vargas showing great composure to induce the once again woeful Iker Casillas into committing himself, before poking the ball around the other side of the keeper and into the net. 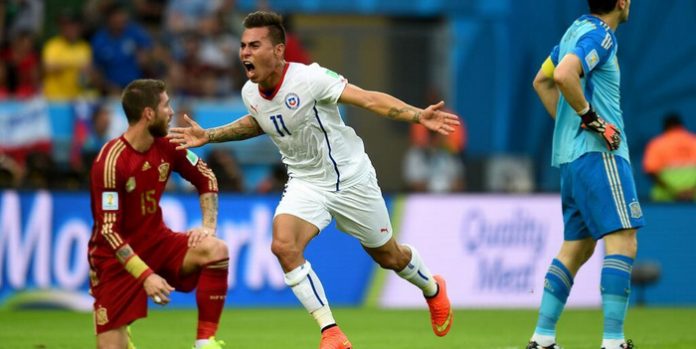 Despite the task at hand, Spain showed little enthusiasm in the final third, with only a couple of half chances falling the way of Diego Costa before Chile scored their killer second just before half time.

A Sanchez free-kick, which should have been break and butter for Casillas, was poorly punched back into the danger zone by the much maligned keeper, with Charles Aránguiz gleefully toeing the ball back the way it came and into the Spanish net.

At two-nil down, the game seemed lost for Spain, with the introductions of Koke (at half time), Fernando Torres and Santi Cazorla failing to inspire the World Cup holders into finding a foothold in the match. 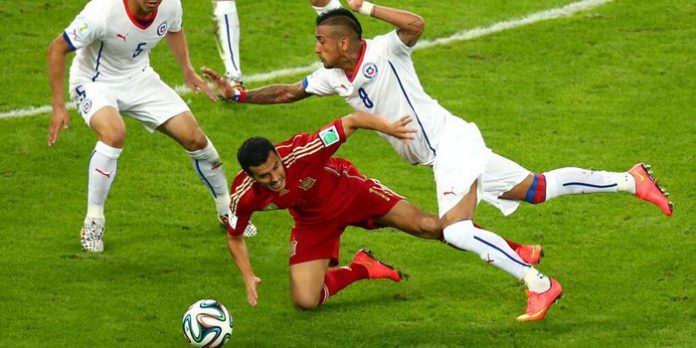 Although, some would say that if Sergio Busquets had converted a glorious chance in the second half, the game may not have ended in Spanish catastrophe, with the Barcelona midfielder inexplicably missing from just yards out after Costa had set him up with an improvised cross.

Chile fully deserved the win however, and their progression to the last 16; the South American side joining the Netherlands in qualifying, with the Dutch also guaranteed a knockout round berth with the result, having beaten Australia 3-2 earlier today.

For Spain, a full overhaul is imminent, with this surely the final outing for the likes of Xabi Alonso, Xavi, Casillas, and Fernando Torres. A sad end to a title defence, arguably over before it has even begun.