Robin Van Persie’s inspired brace helped Manchester United seal their fifth win in a row over coming a much better Southampton side by 2-1 at St Mary’s stadium on Monday night. United were second best throughout the 90 minutes and Ronald Koeman can only wonder how his side despite injury concerns managed to lose a game they dominated right till the final whistle. 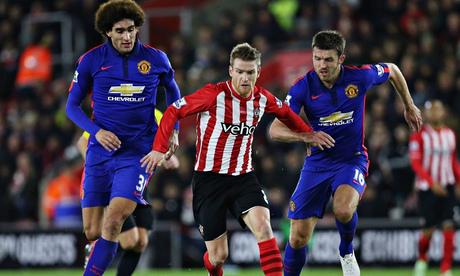 Louis Van Gaal was honest enough to acknowledge that his side were second best but at this stage he would take the win and despite the plethora of injury concerns, United are suddenly 5 points adrift of Manchester City and 8 behind Chelsea. As Van Gaal’s side get ready to host Liverpool on Sunday at Old Trafford, we take a look at three key observations from St Mary’s.

United are grinding results out: Much like Sir Alex Ferguson’s era, Van Gaal deserves credit for having full faith in his team to grind out results despite being second best on the day. The Red Devils could have been blown away by Arsenal at the Emirates but they were clinical in front of goal, making full use of the chances that fell their way.

Against Southampton too, United had three shots on target and two hit the back of the net to give the Red Devils a huge away win. Football is a game which is all about taking your chances and despite United faring poorly, they showed how to muster the crucial three points.

Louis Van Gaal needs to get his formation correct: United started off with a 3-5-2 setup which played into the hands of the home side right from the start. Van Gaal’s side were lucky to take the lead as Van Persie took advantage of a sloppy Jose Fonte backpass to steer the ball into the net past Forster, but in reality United were living dangerously. The 3 man defense meant United lacked width and the Southampton full backs constantly terrorized the wings but let down their team with poor decision making.

With Paddy McNair being taken off, Michael Carrick stepped in as centre back to help United play out from the back, but the away side got dominated in the middle of the park. Van Gaal needs to realize that United don’t have the technically gifted players to play in the 3-5-2 setup and must look to bring in a more fluid approach, lest get beaten by teams who have a more dominating wing presence.

Southampton should act quick and arrest this mini slump: Ronald Koeman’s side have now lost three in a row to both the Manchester teams and against Arsenal, however in reality Southampton deserved much more than what they have to show.

Here are the match stats from last night’s clash between Southampton and Manchester United #SSNHQ pic.twitter.com/4vklkLUeEb

The Saints boss admitted that his side made mistakes in crunch games, it’s the side that makes less mistakes go on to win. The south coast side have a busy festive period schedule but they must make sure that they get out of their shell and not ruin their sparking start to the season.