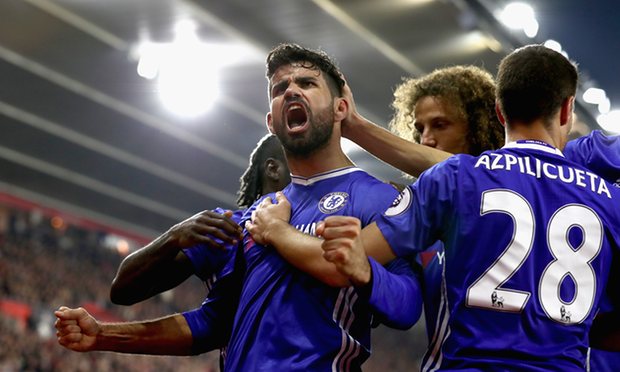 It seems a long time ago that Chelsea were getting hammered 3-0 at the Emirates Stadium against Arsenal. The Blues were clueless, hapless, and lacked any sort of intensity on that day in September. In the second half though, manager Antonio Conte made a couple of changes that have changed the entire dynamic, and the fortunes of the club.

Playing 3 at the back again with Cesar Azpilicueta, Gary Cahill and David Luiz, Chelsea breezed to their fourth straight victory against Southampton on Sunday. In a game that was expected to be a very difficult test away from home, the visitors won 2-0 and did so easily. Everything worked to a tee, and the Blues were hardly troubled. They are now just a point behind the leading trio of Manchester City, Arsenal and Liverpool.

Here are 3 major talking points from their incredible performance:

1) Early goal allows Chelsea to play at their pace

Just like in the 4-0 thrashing of Manchester United last week, Chelsea got off to a flying start. While it wasn’t as early as 30 seconds this time, Eden Hazard‘s opener after 6 minutes allowed Conte’s men to dictate the pace. The Belgian scored for the third straight Premier League game, and has already beaten his tally from the whole of last season. His pace to get in behind the defence was perfectly timed, his skill to cut inside Steven Davis from the byline was exquisite, and his left-footed finish from a tight angle was assured. From here on in, the Blues didn’t lose their tactical shape throughout the match. They invited Southampton to have the ball in their half, but didn’t allow any sort of penetration in the final third. This also allowed them to break quickly, and Diego Costa nearly doubled their lead before half-time as Nemanja Matic put him through on goal, only to see his shot saved by Fraser Forster‘s foot.

2) Costa scores a screamer to seal the deal, Soton struggle to muster any chances

Thibaut Courtois had one of those days where he might as well have brought a divan and a book to read. Southampton didn’t have any clear-cut goalscoring opportunities. The game was put to bed 10 minutes into the second half when Costa shifted his feet to find some space past Cuco Martina before curling an absolute beauty from 20 yards past Forster. This was the Spaniard’s 8th goal of the season, and the 40th Premier League strike of his career. He’s achieved this feat in 64 games, having found the back of the net with unerring consistency since arriving at the club in 2014.

If any team looked like scoring another goal in the game, it was Chelsea, as they appeared lethal every time on the counter-attack. The home team found the Blues’ organisation and discipline impossible to break through, and Charlie Austin was forced to feed off scraps throughout. In the end, it was a comfortable three points for the visitors.

The reaction at the end of the game was a sight to behold for Chelsea fans. Conte‘s expression of delight showed just how much this meant to him, while every one of the players stayed back to acknowledge the raucous away end filled with men and women in blue.

Just look at how happy he is. Antonio Conte gets its.pic.twitter.com/yEVdrVyJqb

With four straight wins and clean sheets, October was the perfect month for Chelsea. From looking lost at the end of September, the Blues are finally the real deal now. With no team really running away with the title, the 2014/15 champions will very much consider themselves one of the contenders. They are still in a phase of reconstruction and a top 4 finish after last campaign’s nightmare would probably be a success in itself. But in a season where intent and desire will go a long way to determine the winner, a Conte-managed side seems to fit the bill perfectly.