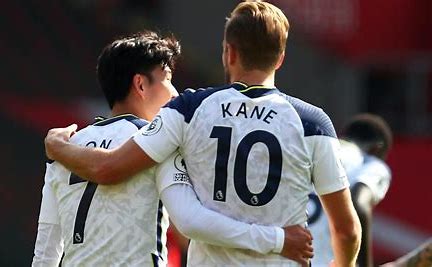 Son said that he and Kane have developed a strong understanding with each other on the pitch.

The South Korea international added that the 27-year-old England international is “incredible”, and outlined how he helps him score goals.

The 28-year-old made the comments following Spurs’ 1-0 win against Burnley away from home at Turf Moor in the Premier League on Monday evening.

Son scored the winner for Spurs on 76 minutes when he headed home after Kane had headed Erik Lamela’s pass onto him.

The South Korean said: “I think we understand quite well. We spoke already so many times. But I think he is just incredible.

Kane and Son have been superb for Spurs so far this season, and they have connected well with each other in attack.

According to WhoScored, the England international striker has scored five goals and provided eight assists in six Premier League games for Tottenham so far this season.

Tottenham are fifth in the Premier League with 11 points from six matches, just two points behind Everton and Liverpool, who are first and second respectively.

This is turning out to be a strange season where Manchester City are below West Ham United and Arsenal, while promoted club Leeds United are sixth in the table.

While some Spurs fans may hope for a title challenge this season, the main objective for the North London outfit this campaign has to be finishing in the top four.

A return to the Champions League is crucial in Spurs’ bid to achieve success in the future in terms of more finance and attracting better quality players.