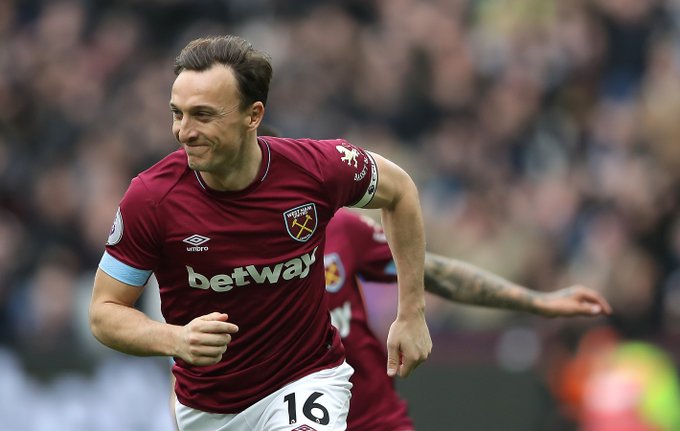 Some West Ham United fans have taken to Twitter to give their reaction to the performance of Mark Noble against Newcastle United.

Noble was in action for West Ham in their Premier League game against Newcastle at the London Stadium on Saturday evening.

The English midfielder started the match and played for 67 minutes, as the London club lost 2-0.

According to WhoScored, the 33-year-old central midfielder played one key pass, had a pass accuracy of 86.4%, took 47 touches, made one tackle, and put in one cross.

Some West Ham fans were not impressed with the display produced by Noble and have criticised him on Twitter.

For the next 6 games, I’m expecting to see noble on bench, Haller start and I’m praying we see a new name at LB

I'm still baffled that were still using noble at CAM!!!

Won't being any changes, Moyes will be happy with first half, we had a couple of chances and hit the woodwork, no need to change things yet, although I'm not sure what Noble is doing, seems lost to me and I'm not sure where he's actually playing if I'm honest.

Fornals & noble absolute passengers in this game. Frederick's can't do his job properly. No target man cos Antonio comes close to get some of the ball. Awful footballn1st half and somehow we've hit the bar twice 🤷‍♂️

If its a free role, play Fornals or Anderson there. Makes zero sense playing someone so slow and ponderous in that position

Over the course of the 90 minutes at the London Stadium on Saturday evening, hosts West Ham had 58% of the possession, took 16 shots of which three were on target, and earned eight corners, according to BBC Sport.

It was a very disappointing performance from West Ham, who failed to create much of note and were the second best side throughout the match.

Newcastle are a good side and played well, but playing at home, the Hammers should have done more in attack than they did.