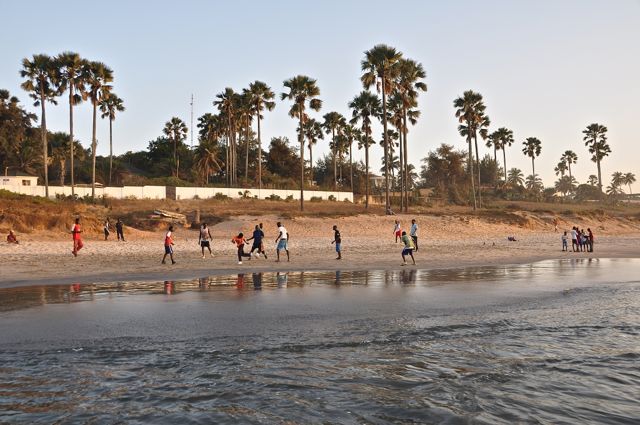 The warm West African sun slowly setting over the Atlantic Ocean provides the picture-perfect backdrop as the male population of Fajara descends as one upon the seafront. It’s 6 o’clock, work’s over and it’s time for the daily ritual of beach football. Within minutes, the coastline is awash with hand-me-down replica jerseys and cries of ‘tiki taka’ as numerous games are set up. 3-a-side, 5-a-side, 20-a-side: it matters not. Small turrets of sand mark the goals, the dunes and encroaching sea the natural touchlines and it’s not long before the high-energy but remarkably low-tempo possession-based games are in full flow.

Football in The Gambia isn’t just a pastime, it’s a religion. A Champions’ League evening means standing room only and pin-prick silence in the small cafés and sports’ lounges as every ear strains to catch Steve McManaman’s half-time analysis. The streets billow with red dust as kids play their daily after-school game. Taxi drivers, school teachers and imams alike share the same zeal and partisan affection for the beautiful game. Yet The Gambia have never qualified for a major competition, never had a player feature regularly in a top-flight European league and they currently lie 163rd in FIFA’s World Rankings. Football might be a religion but the grandest home-grown idol, Momodou Ceesay, is no more than a regular bench-warmer for FC Kairat, relegation-scrappers in the Kazakh Premier League.

So how does a country with such unquestioned passion for the game make so little impression internationally? The government seems to believe it’s down to structures and authorities. In March 2012, the Sports’ Ministry dissolved the national FA, reasoning that the country was “making no headway in continental or global competition.” Alieu Jammeh, the head of that ministry, meanwhile, puts the lack of progress down to the lack of the “essential pillars of football”, specifically in terms of domestic competition and grass-roots development. And certainly, there’s much room for improvement when West Brom – QPR can pack out a 1000-seater cinema but the top-flight domestic league is played in front of empty terraces and remote sports’ fields. Or, indeed, when the FA employ Lamin Camara in the official role of ‘Head of Delegation’.

The problem, though, seems to be more endemic – less a question of structure than style. The ethos of the Gambian game doesn’t lend itself naturally to the production of high quality players. The problem, in many ways, is the complete reverse of that highlighted by Rio Ferdinand, Gary Lineker and co. in respect to the English national team – England can’t keep the ball or adjust to the low tempo of international football; The Gambia won’t allow themselves to lose the ball and so play with painfully low intensity. On the beach and in the street alike, it is frowned upon, when clear through on goal, to selfishly attempt to score when you could retain possession with a 30-yard back-pass. And so, while the cry that goes up on the beach may be ‘tiki taka’, the play that accompanies it couldn’t be further from the slick and incisive passing triangles of Cataluña. The tempo is slow and the passing rarely progressive: if it resembles international football, it’s only the training-ground keep-ball that accompanies the last 5 minutes of meaningless friendlies. Lack of player development is hardly surprising – on the golden sands of the west coast of Africa, precision doesn’t compliment incision so much as replace it.

More concerning even than that, though, is the way that the players who do manage to emerge from such an unlikely backdrop seem to slip through the net. In 2009, the Gambia U-17 team won the African Cup and so secured qualification to the age group World Cup. Gracing the same tournament as Tariq Sagay’s men were, amongst others, Neymar, Mario Gotze, Granit Xhaka, Isco and Iker Muniain. Yet The Gambia’s most successful ever youth team has produced only one full international – NK Lokomotiva centre-back Lamin Samateh – and, even more worryingly, only two other members of the squad are still involved in competitive football. Drop-outs are not unusual from an U-17 side – emotional maturity and physical development are often hard to determine at that age – and the equivalent England side contained Jeb Steer and Edward Eshodi (me neither) alongside Jack Wilshere and Jonjo Shelvey, but the extent is alarming.

Alarming, but somewhat explicable. After all, in a third-world society where you don’t eat if you don’t work, pursuing a career in football is a major gamble with life and livelihood. Whereas Man Utd’s £4.5m compensation pay-out to Ben Collett following his career-ending leg break set a precedent in European football, it has understandably not been matched in Africa. As Aladin, a student who turned down the advances of the Gambian Premier League, puts it: “if you injure yourself badly, it’s not just that you can’t play football again, you can’t work again.” It is only reasonable that to gamble, un-insured, on an already unlikely dream is a risk not worth taking.

There are positive signs – not least Ali Sowe becoming the first Gambian to appear in Serie A and Hamza Barry’s tricky wing-play at Valetta – but the decline looks unlikely to be arrested in the foreseeable future. Efficient and progressive infrastructure, more directive systems of playing style and a welfare state or the economic prosperity to secure a compensation safety mat: each one in turn seems less likely. But, in a nation where football is a religion, one still half-expects a Gambian to break through into one of the major leagues eventually. Even if their footballing nous is so thoroughly misguided that you can walk past a sub-urban wall graffitied as follows: