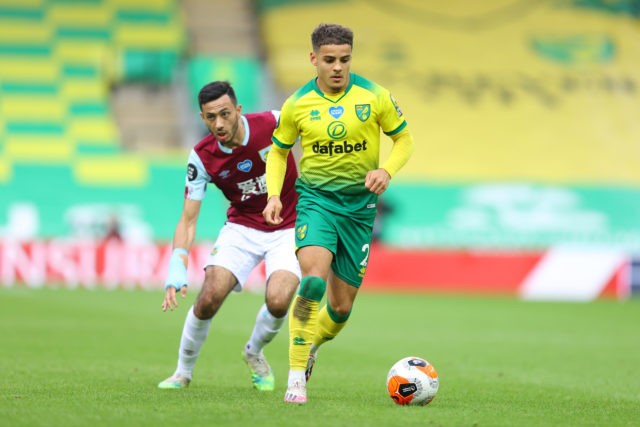 Everton today have confirmed that the club will not sign Djibril Sidibe on a permanent deal after his loan spell at the club expired.

Unless Carlo Ancelotti has big plans for Jonjoe Kenny, Everton will be left with Seamus Coleman as the only recognised right-back at the club.

Kenny has impressed at Schalke on loan, and the German club are interested to sign him permanently. Thus, Everton are expected to look for a new right-back this summer.

With this in mind, the Toffees must move quickly and make a tempting bid for Norwich City’s Max Aarons.

The 20-year-old enjoyed a superb campaign for the Canaries, but couldn’t prevent the club from getting relegated.

He is likely to leave the club this summer, and there won’t be any shortage of admirers.

According to latest reports from Sky Sports, German giants Bayern Munich have registered an interest in the youngster, and are willing to offer around £18m for his signature.

Tottenham Hotspur are also in the hunt to secure his services. Spurs have closely watched Aarons and will no doubt test the waters this summer.

Everton must move quickly and secure a deal for him. Although the Toffees cannot offer him Champions League football like Bayern, they can certainly tempt him with the offer of regular first-team football and a lucrative wage package.

He is a highly-rated young talent, and has a bright future ahead of him. Aarons could be tempted to play under a world-class manager like Ancelotti as well.

And given his age and talent, Everton should not shy away from making an investment in the region of £18m-25m for the youngster.