While seven Premier League clubs featured in 2013 Deloitte Football Money League, five clubs from Italy made their way in top 20.

Serie A teams in the Football Money League

Milan have dropped one place to eighth in the season but still are the leading Italian club among other packs. They have amassed a total increment of €22.1 million, which is a growth in itself by 9%.

The Rossoneri finished second in the Serie A behind Juventus, while lost out in the Champions League quarter finals (their best run post 2007) against the mighty Barcelona last season.

The improved performance in Europe has earned them a €14.1 million increment in UEFA distributions while overall broadcasting revenue has improved by 17% to £102.2 million.

But the only concern remains with the constant drop of attendance on Match days which is hampering the club revenues (£27.4 million) badly. Despite having a sitting capacity of over 80,000, San Siro has failed to attract audience far less than 49,000 on an average basis.

Stark contrast to it are Premier League outfit Chelsea, who generates thrice the revenue of Milan on Match Days despite having half the capacity of San Siro. 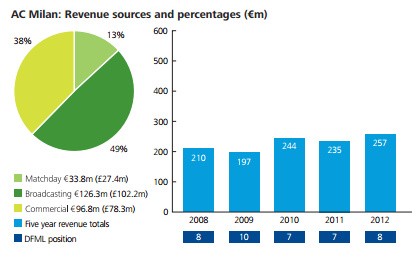 The Old Lady are back in top 10 of the Money League and have generated an increase of €41.5 million in revenue in a season that saw the Bianconeri winning the Scudetto title by remaining unbeaten throughout the season.

The match revenues have almost trebled as the club moved to its new 41,000 capacity Juventus Stadium, where the average attendance has increased by 63%.

The club has been hugely benefited from 36% increase in commercial revenues catapulted by lucrative sponsorship deals gained from winning the Serie A title.

The improvement has also been noticed in the field of broadcasting too, where the revenue rose to £73.3 million (2%) increase despite the club’s lack of participation in Europe. 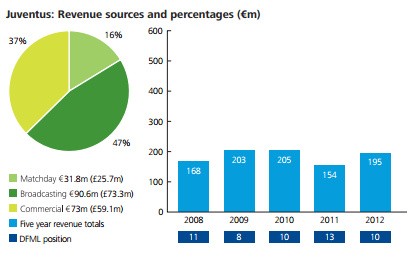 This has been one of the worst years for Inter, both on and off the pitch and the club for the first time slipped out of top 10 in the Money League since 2001/02.

Their overall revenue has declined to 12% and the major reason for that is poor performance on pitch. They finished sixth in the table – their lowest position since 1998/99 and exited early in the Champions League as well.

Their match day revenue has dropped by 29% and £18.8 million earned from the source amounts to just 13% of the total revenue.

As compared to the last season, the broadcasting revenue has dropped by 10% (£90.9 million) that represents 60% of Inter’s total income while in the commercial sector there has been a drop of revenue to 7%, despite the club having a long standing deal with Nike and Pirelli. 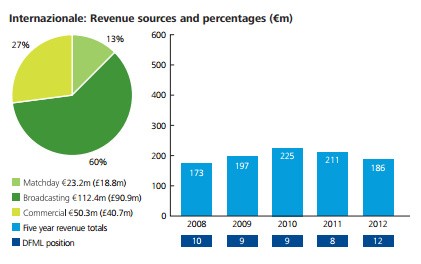 After completing another fantastic season, Napoli moved five places up in the Money League to 15th where their total revenue saw an increment of 29%.

The Naples got a huge lift in terms of Match Day revenues. Pitted in the group of death in Europe, they played against the likes of Bayern Munich and Manchester City and later on Chelsea and the revenue rose by 12% with average attendance exceeding 35,000.

Broadcasting revenue is the largest contributor for Napoli’s financial success, representing 58% of the total income. The revenue has increased by 48% primarily because of central distribution received for participating in UEFA Champions League.

Roma’s situation is identical to that of Inter and they dropped four places in the Money League to 19th. They finished seventh in the Serie A, failed to qualify for Champions League, lost the Italian Cup at the quarter final stage and the Giallorossi will miss out on another season from European elite competition in 2012/13.

Though the broadcast revenue has decreased by 29% and the Match day revenue has also dropped by 16% but the long term prospects of the club looks brighter.

The club have been sold to a consortium led by US entrepreneur Thomas Di Benedetto, while they are expecting to build a new stadium within 2016/17. Further, they are boosted by the increase in commercial revenues, mainly due to new deals with Volkswagen and Disney (ESPN).

In a nutshell, we can see broadcasting is the key department which has been the major source of income for the Italian clubs. However, the constant drop of audience in Match Days is really an alarming sign, which is hampering the club’s match day revenues.

While in England, club like Liverpool despite not playing in the Champions League for few seasons now, have been able to keep themselves in top 10 of the Money League table, the same cannot be said about clubs like Roma, Inter or even Napoli.

While Juventus are playing in Europe, expect the champions to move higher up the Money League table or retain the position next season. But, Milan’s finances can get hampered if they finish out of top four this season.

Similar sort of things can be said about Roma too. The future looks bright for them with new stadium will be in place, but it is the on field performance and short term success which holds the key now.