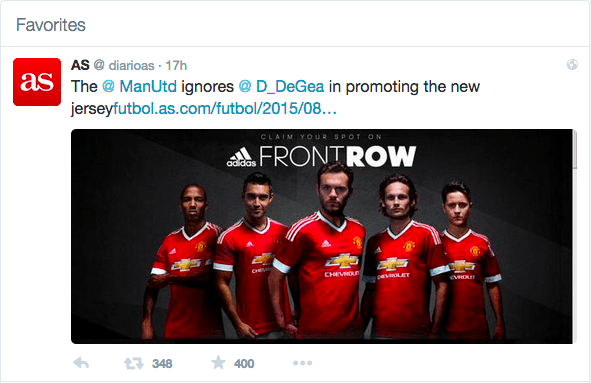 Sergio Ramos has apparently committed his future to Real Madrid. The Spain defender has been heavily linked with a move to Manchester United in the summer, but as it stands, he has the backing of the Real Madrid club president, and that he is not going anywhere at the moment. That’s sorted for you.

The big question remains with David de Gea’s future. Spanish media believes that Louis van Gaal is ready to sell him to Madrid, but only at the price set by the club. Real Madrid are apparently happy with the keepers they’ve got, but they would greet De Gea with a warm welcome, if the deal goes through.

Nowadays, Twitter, a social network, has become such an important tool for communication, where people tends to make interpretations out of every single tweets, especially if that comes from a celebrity figure.

Ramos has over 5.5 million followers and he regularly interacts with his fans. Spanish newspaper AS wrote an article yesterday where they speculated the reasons behind De Gea’s omission from the New Adidas Manchester United 15-16 kits launch session.

The newspaper speculated that probably a transfer work is going on behind the back, as a result the club didn’t risk of putting him on the advert. Sergio Ramos has favourited that article on Twitter.

I don’t know what it means. Make your own interpretations!