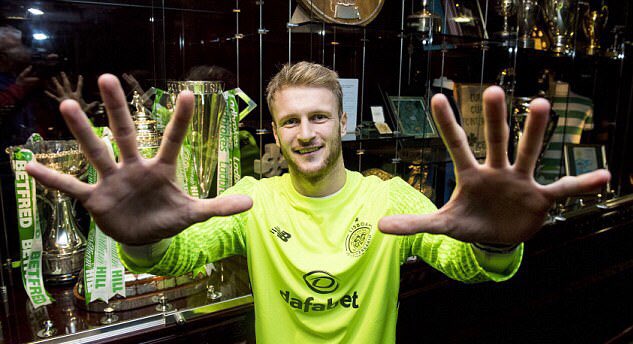 Celtic keeper Scott Bain has signed a new deal with the Scottish champions.

As per the report, the 26-year-old has signed a four-year deal that will keep him at the club until the summer of 2022.

Bain joined Celtic at the end of the January transfer window from Dundee.

The 26-year-old has been quite impressive for Brendan Rodgers’ side so far this season and the fans will be delighted to see his long-term future sorted.

Bain made his debut against Rangers at Ibrox earlier this season and the 26-year-old had a memorable outing. The Celtic shot-stopper pulled off some remarkable saves to earn his side a 3-2 win away from home.

He has since gone on to make six appearances for Celtic with three clean sheets.

Speaking to the club’s media, Bain revealed that he is delighted to have signed the new deal.

Delighted to be at this great club ✍?? https://t.co/QZi4gaHghe

He said: “I’m delighted. It’s more than I obviously expected when I first came in. I’m over the moon. I don’t think it could have gone any better. It’s funny, there’s a lot of little things that went my way to get to Celtic on loan and then to play the game against Rangers, which sent me on my way to this four-year-deal. It’s been great and I’ve loved every minute of it.”

Speaking about his future and his goals, he added: “I have the same aims that I’ve had since I arrived here which is to improve as much as I can on a daily basis. I have all the facilities here, the manager, the staff, the goalkeeping coaches like Woodsy, to reach my full potential. The sky is really the limit. It’s about working hard and putting my all into this club.”

Best goalie in the league.