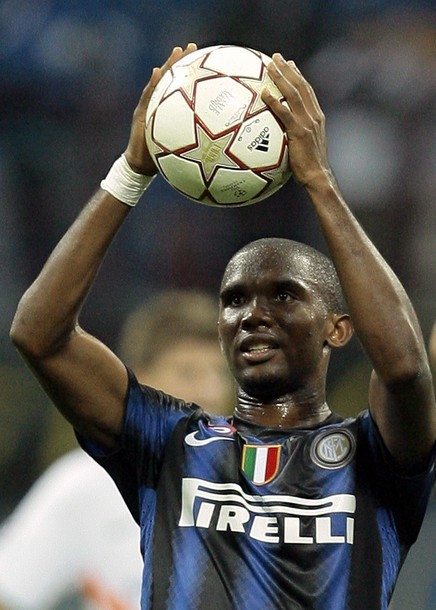 It was a wonderful sight this past Wednesday night as one of the world’s most gifted and clinical strikers gave yet another scintillating performance  to add to his storied career –  something that we haven’t really seen for the past year as the divine Samuel Eto’o bagged a hat-trick against Werder Bremen.

Back in his favoured role, he may very well claim yet another match ball or two before the end of next May.

There is no denying the man’s ability. He is an absolute predator in front of goal and his mobility and movement in the final third is untouchable. He is vastly intelligent and his positional know how is flawless.  He is a truly spectacular football player.

His debut season in Serie A with Internazionale was something that dreams are made of. Under the guidance of Jose Mourinho the Nerazzurri went on to claim a historic treble, becoming the first Italian side to do so. This achievement is all the more remarkable for Eto’o as he accomplished the same feat a year prior in Spain with Barcelona. He is without a doubt one of the most decorated footballers of his generation – three European Cup’s alone echoes that testament.

Although his season was phenomenal on a team level, personally his attributes were severely restricted as Mourinho utilised the Cameroonian as more of a deep front man playing on the left of a three man attack with Pandev on the right and Diego Milito as the catalyst in the centre of the trio.

Eto’o’s role wasn’t gaining the full benefit of his attacking prowess but he certainly did a valiant job. His season in fact began with a flurry of goals as Mourinho opted to play him in a 4-4-2 with Militio as his partner up top. It was the signing of Goran Pandev from Lazio back in January and the resuming of the UEFA Champions League in the middle of February where his new role became a more frequent recurrence in Mourinho’s thinking.

Playing deeper on the park was something of a hindrance to his personal play but a real asset to his team. Not once did he dispute his coach’s instructions nor did he throw his toys out of the pram. The 29-year old may not have necessarily liked his new position  but he knew deep down that his coach was implementing something special – ignore the pun – and the Milanese club were going to profit from it.

Despite getting used to his new role he scored possibly the most crucial goal of Inter’s season – the winner at Stamford Bridge in the last sixteen of the Champions League against Chelsea. It’s the goal that turned il serpent’s belief into a realisation that they can end a forty-five year wait and place a third European Cup in their gleaming trophy cabinet.

Eto’o can be known for his temperament at times. If something is bothering him in terms of his game it is more than likely that he’ll make his feelings known. This just wasn’t the case last season. He was a true model professional by working for the cause of the team and being hugely unselfish. Milito was grabbing all of the headlines – and rightfully so – as Eto’o’s workload was being overlooked. In a career where he has been the main protagonist for goals he was embarking on a more defensive duty – and it paid off dividends – Inter won their treble.

Now with Jose Mourinho at the realm of Real Madrid looking to create a similar piece of history for Los Blancos, Eto’o is now being played in his preferred role under the stewardship of Rafael Benitez.

Despite the Spaniard still opting to play the 4-3-3 formation which has taken Inter to new heights, the Cameroon international has been playing in more or less the same position as he did last term.  This time however he has been playing higher up the field without the dreary duty for a prolific front man by constantly tracking back and sitting deep.

He has already bagged five goals in five Serie A fixtures this season as well as netting four in two in Europe – three of them coming on Wednesday night. The glisten was well and truly back in the former Barca man’s eye as he bagged a wonderful hat-trick against German outfit Bremen.

Interestingly, had it not been for Milito’s exclusion from the game due to injury, would of he been playing the lone man up top with a supporting trio just behind? Probabaly not but he was sensational and gave a display which was something the people of Catalonia frequently witnessed during his time at the Camp Nou. He was enjoying himself that much even took the opportunity to take Wesley Sneider’s photo.

When Samuel Eto’o is on his A game he is pretty much untouchable. If Benitez can continue to utilise him in more attacking emphasis then the Nerazzurri can only reap the benefits.