Bad luck just seems to never end for Ronaldo. The first reports, released by SkySports just after the game, seem to suggest the Brazilian striker’s left knee suffered a crack in the rotulean tendon, something which at the age of 31, may put Ronaldo’s career seriously at risk (Gazzetta is talking about 9-12 months recovery time). At the end of the day it’s the piece of news that really stands out, making Livorno’s very good performance (and the draw they obtained at the San Siro) seem much less important.

Ronaldo’s diagnosis is very clear. Milan’s head of medicine Jean-Pierre Meersseman revealed: “After Ronaldo’s injury we decided at once to transfer the player to the Galeazzi hospital in Milan [one of the best orthopaedic hospitals in Europe]. There’s little to say about the seriousness of the injury – unfortunately they confirmed that it was a rupture to the tendons of his left knee. He will definitely need surgery. We are all distraught at what’s happened“. Recovery times for an injury like this span from 9 to 12 months. 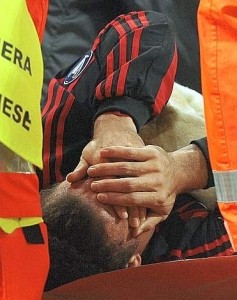 Ronaldo’s immediate impression right after the injury, was to have sustained something similar which had happened on April 2000, when the Brazilian star severed the tendon in his right knee. Leonardo Araújo, the former Brazilian international now on the AC Milan staff list, declared: “He immediately realized it, the first words he uttered when he got to the changing room were ‘it’s the same thing as last time’. How do you think he’s feeling? We’ll see what to do now, but it will probably be all very quick“.

Indeed it will. As you are reading these lines, Ronaldo will have probably already left Milan, in order to meet with Dr. Saillant‘s medical team in Paris, the same one that rebuilt his right knee 8 years ago. Milan’s head of medicine, Jean-Pierre Meersseman, and the head of the Sports trauma department, Dr. Walter Pascale, tried to reconstruct the events which lead to Ronaldo’s injury (“He was hit from behind, and likely lost balance on his standing leg“) and declared that the player’s left knee had been bothering him all year, despite the fact it didn’t prevent Ronaldo from training. Dr. Pascale however pointed out he DOES NOT consider this a career-ending injury for Ronaldo: “The previous surgery in 2000 had been a perfect success, and during the past 8 years medical techniques for these kinds of injuries have considerably improved. If everything goes well, he should make a full recovery“. Some much-needed optimism… for Ronaldo’s sake. 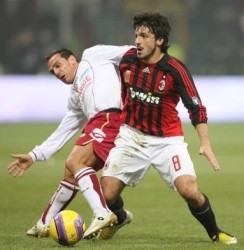 For this match, Milan manager Carlo Ancelotti decided to decrease the medium age of his starting line-up a little bit: Yoann Gourcuff (21) and Alberto Paloschi (18) were the welcome (young) additions to an ageing team which, with the exception of Andrea Pirlo, had no player below age 30. With the young Frenchman subbing in for the unavailable Clarence Seedorf (ankle problems) and Kaká (also injured), the Milan coach was hoping to obtain the necessary playmaking quality to set up his two strikers (Gilardino and Paloschi). On the good news front, Gennaro Gattuso made his come-back into the first team after recovering from injury.

On the other end, Livorno’s Giancarlo Camolese set up his team with a determined 3-5-2 formation; a thick midfield designed to contain the Rossoneri’s creative verve, but with quick wingers ready to feed the striking duo with fast counter-attacks. When you have finishers of the caliber of Diego Tristán and Francesco Tavano (just check out the latter’s goal vs. Genoa this week-end), danger is never too far away. 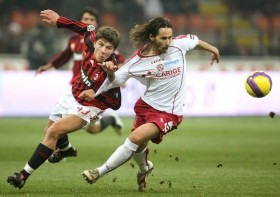 The first half of tonight’s match needs few descriptive paragraphs: in a word, boring. Without their usual playmakers KakÃ  and Seedorf, AC Milan’s creative abilities were seriously hampered and there’s only so much that Andrea Pirlo can do, right? Despite the overwhelming 68.4% of ball possession (seriously, when a team gets over 65% and fails to produce even a goal, something is wrong), the Rossoneri managed to rack up very limited scoring chances, the few of which through Gourcouff (long-range attempts from outside the box) and Massimo Ambrosini (close-range diving header, brilliantly parried away by the Azzurri vice-Buffon keeper Marco Amelia). Where were the two Alberto strikers (Paloschi and Gilardino) in all of this? Absent.

For Livorno, not much to report either: a lone strike by Francesco Tavano very close to the crossbar, sending shivers down Kalac’s backside, but not much else. That shot by the way, was the only evidence today for the Livorno striker’s presence on the field, as the lad unfortunately had to be substituted before the break, complaining about a muscular problem. 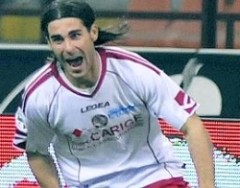 In the 2nd half, all of Milan’s problems were amplified when the visiting team opened the score, in brilliantly-executed style I might add. As a football player, there really is no better gift than scoring on the day of your birthday, so Livorno’s Nico Pulzetti (turning 24 today) must have been really glad when he put his team ahead, a mere 5 minutes after the restart of play. Following a deadly Livorno counter-attack, the Amaranto midfielder controlled the ball on the right side of Milan’s box, put the ball onto his left, and slammed an absolutely unstoppable blast into Zeljko Kalac’s top-left corner. Magical stuff, and 1-0 Livorno.

After the goal (and almost crying at his players’ unproductivity) Carlo Ancelotti decided to shake things up a bit, something which at that time translated into replacing his entire striking front: out with Gilardino and Paloschi, in Filippo Inzaghi and Ronaldo. 4 minutes later, good news finally arrived for the Bianconeri: José Luis Vidigal handballed inside the box, resulting in a penalty-kick for AC Milan. On came the expert Andrea Pirlo, who tied the game to 1-1. 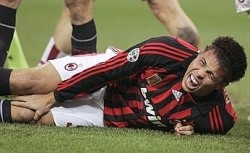 The bad news? In trying to jump for the header (during the same play which provoked the handball), Ronaldo fell to the floor in agony, grabbing his left knee. DéjÃ -vu stuff, with the Brazilian player writhing in pain while he was being stretchered off. Uh oh…

Serginho came on for his injured teammate, but there was little this match had left in the way of scoring. There were two good chances for either side to be quite honest, one for Milan (a 76th minute Inzaghi diving header saved by Amelia) and one for Livorno (a stoppage-time Pulzetti one-on-one chance with Kalac, which the Livorno player didn’t manage to connect with properly), but no goals. The final 1-1 result is a good draw earned by the Amaranto and a missed opportunity for the Rossoneri, who are now left 1 point behind 4th-ranked Fiorentina in the Serie A standings. That Champions League qualification spot won’t be easy to get to, and with Ronaldo out of the picture, even harder. 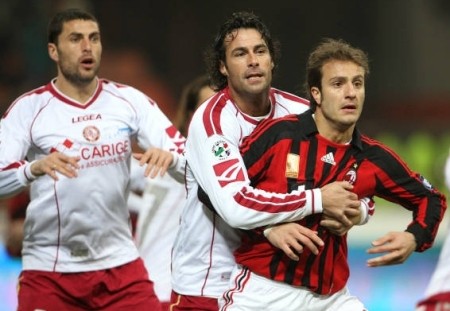