The article below refers to a previous Inter-Roma game. For the latest fixture, see this Inter Milan-Roma article.

His last match in the starting eleven had been over six months ago, but one has to seriously wonder if even a Francesco Totti at 200% capacity would been able to stop the Inter Milan tsunami crashing over Roma on Sunday. Conceding four goals in your home stadium is already tough enough to swallow, but if that happens against those who in the past three years have constantly thrashed your Scudetto hopes, that’s when the taste gets really sour. Seriously, I can’t think of anything worse that could have happened to the Giallorossi this week… Losing to Lazio maybe?

Inter did not only beat Roma tonight, they destroyed them. Atomized them to tiny little pieces. So big was the difference in playing level in fact, that the Nerazzurri litterally dominated every aspect of the match and every zone of the field. As much as Roberto Mancini’s Inter often relied on bits of individual skill to get the job done, Mourinho’s touch on the team has impressed a distinctively-marked tactical superiority: the defensive, midfield, and forward sections are compact within one another, and ready to face almost any situation presented to them. 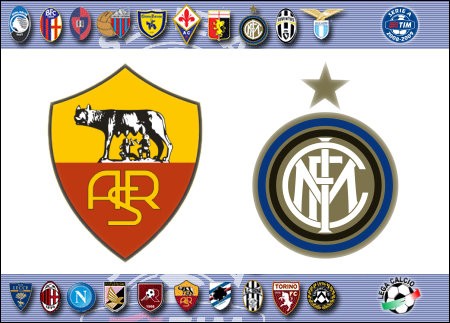 (From Gazzetta): There is one image explaining the positive state (physical & mental) of Mourinho’s side during Sunday’s match better than all others. With 15 minutes left in the game (and Inter already 4-0 up), Roma had obtained a free-kick to be taken by Jon Arne Riise. The Norwegian’s shot was accurate and powerful: a real daisy-cutter headed towards the bottom corner, and perhaps finally the consolation goal for the Giallorossi. After making a great save and parrying the ball away, Inter keeper Julio Cesar clenched his fist and yelled in satisfaction. Just like a futsal keeper would do, in order to release tension for being under constant attack.

If Inter keeps thinking (and playing) like this, it will be really hard to take the Scudetto away from them. At the Olimpico, on the night that Spalletti hoped would be a turning point, it only took five minutes for Zlatan Ibrahimovic to turn Roma’s evening supper plans to indigestion. Following a long ball from 30m, Cicinho was the last one to push up the line and kept the Swedish striker onside: Ibrahimovic got to the ball, chipped his shot (Doni’s rush out of his posts was poorly timed), and scored. 1-0 Inter. And so Spalletti’s side, finally with Totti in the starting line-up after six long months, was playing catch-up football right from the start. 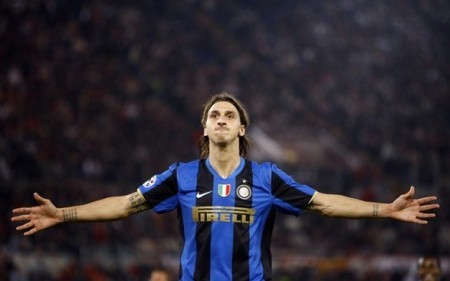 Ironically (and despite the very early lead for his team), a couple of things still did not sit well with Jose Mourinho: a foul near the halfway line not picked up by the referee, and Maicon’s point-blank error in the 13th minute (which would have ended the game right there, with more than one hour to spare). So taking out his famous notebook, José proceeded to make some notes: perhaps an “OK” for Obinna’s surprise inclusion in the starting line-up, and perhaps some notes on Quaresma’s movements on the field (fairly predictable when constantly trying to arm his “trivela” kick). Those flaws aside however, the right-wing attack was the one being most dangerous to Roma, so much so that Spalletti asked Aquilani to shift his position in order to control Maicon. 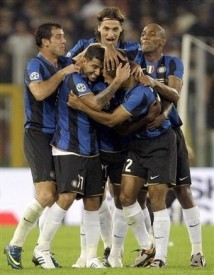 After having swapped sides for their wingers at the half-hour mark, Inter retreated into itself in moments of difficulty. Francesco Totti was quite extraordinary: his fitness level nowhere near ideal conditions, he still managed to use his magic first-touch to open up space for his teammates. Unfortunately for the Giallorossi, the two moves they constructed through the skills of Il Capitano and Vucinic were neutralised by Inter’s defensive wall. The Nerazzurri thus went to the break in better psychological shape, a factor proving to be decisive later on.

In the second period, only four words are needed to describe the events leading to Roma’s burial: ten minutes, three goals. With a striking power made even more effective by the (very) light infantry guarding it, Inter moved forward like a tank and crushed anything in its path. Only two minutes had passed after kick-off when Loria missed his tackle on Ibrahimovic, and opened the way for Inter’s second goal. Shortly after, Dejan Stankovic scored his first of the season with a beautiful & powerful half-volley (minute 9), and was immediately imitated by Victor Obinna minutes later (controlling, dribbling, and nailing Doni from the edge of the area to make it four. 2-0, 3-0, and 4-0 Inter in the bat of an eye.

Roma fans (who, despite the flood of Nerazzurri goals, should be praised for continuing to cheer their team on) clung to the pride of Totti and Vucinic. Julio Cesar however, denied both of them the consolation of making a difference, and when all hopes of making amends for a poor display had evaporated, Maicon hit the post, finding himself alone in front of Doni. The match ended under the crowd’s boos, mostly directed at Spalletti, and with Mourinho’s smile. José now finds himself alone at the top of Serie A (9 points ahead of Roma) and with one more 4-goal performance (his first in Italy) to add to his resumé. And a strong feeling that this Inter team can be very ‘special one’ too. In Italy and in Europe. 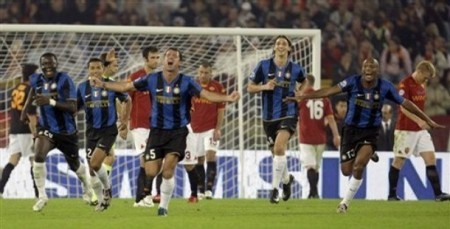