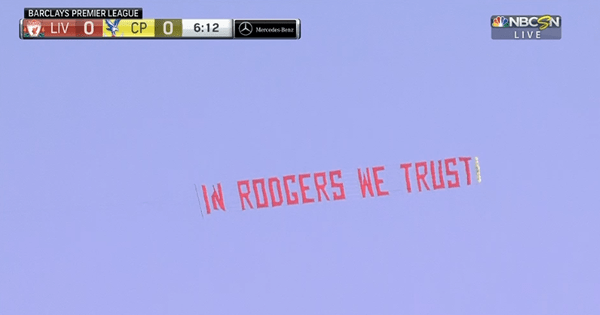 Only couple of weeks back, there was a strong message “Rodgers Out, Rafa in” flown over Anfield during Liverpool’s home game against QPR.

Whoever did it was a pathetic attempt to grab attention. Liverpool fans were disappointed with this season’s performance, it didn’t go well according to the plans, but the situation is certainly not that bad where they would have to deliver such a strong message through bizarre stunts.

On Steven Gerrard’s final day at Anfield, Liverpool fans showed the solidarity again by giving their full backing of their manager.

Liverpool lost 3-1 at home at against Crystal Palace, but the result hardly meant anything. It was an emotional day at Anfield, a day of farewell and tears.

Gerrard urged the Liverpool fans in his final press conference to show full support to Rodgers, and the fans rightly responded by putting up a banner with a strong message “In Rodgers we trust”.