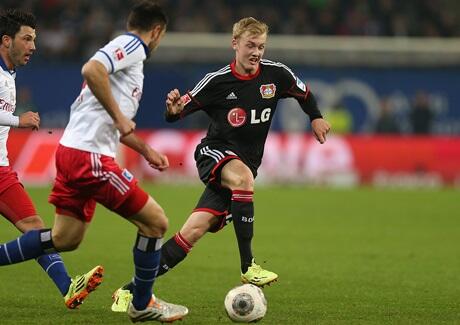 Liverpool boss Brendan Rodgers made a trip to Germany to scout Bayer Leverkusen wonder-kid Julian Brandt according to The Mirror.

Sami Hyypia’s team lost 2-1 to Hamburg, but Brandt scored his debut goal for the club and became the youngest ever player to score in the club’s history.

The 17-year-old joined Bayern Leverkusen from Wolfsburg in the January transfer window after he was promised first-team football. A host of clubs were interested in his signature including Chelsea, Bayern Munich and Borussia Dortmund.

Reds manager Brendan Rodgers will face stiff competition from Manchester United and Chelsea for his signature. Rodgers is keen to add quality youngsters to his squad. Rodgers has placed his faith in a number of young players since he took the Liverpool job and Anfield might be the ideal place for Brandt to continue his development.

Liverpool are currently top of the league and travel to West Ham on Sunday, where a victory will take them ever closer to their dream of winning the Barclays Premier League title for the first time in 24 years.

The Reds however, will face Manchester City and Chelsea, and the result of those matches are likely to decide the fate of the title race.