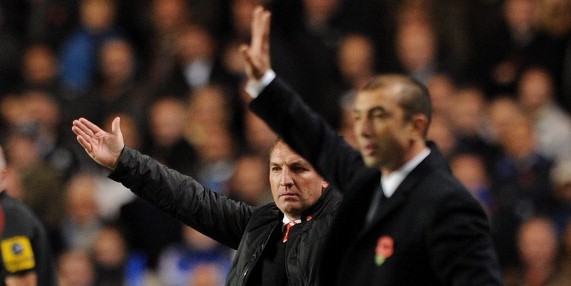 When Brendan Rodgers tries it, we are in awe of his ‘fresh and innovative’ philosophy on the beautiful game, trying to create from midfield, one-touch passing his way to success.

When Roberto Di Matteo tried it, he lost his job.

The beginning of this revolution, that has made its way onto our shores, came to light in July’s European Championships final, where Spain proved to the world that once again they are the team to beat on the big stage, and did so throwing the rule book out of the window.

Eyebrows were raised when they fielded a starting XI with no recognised strikers on the pitch against an in-form Italy side, despite talented goalscorers Fernando Torres, Alvaro Negredo and Fernando Llorente available for coach Vincente Del Bosque to choose from.

This was our first glimpse of this previously inconceivable 4-6-0 system, which now is becoming more prevalent in the Premier League, and certainly ruffling a few feathers.

The manner in which the reigning World and European champions blew the Azzuri away, and the finesse and style by which the goals were scored, silenced all the doubters, and opened our eyes to a breed of football unbeknown to our archaic mentality to the beautiful game.

We have always been advocates of gold old faithful 4-4-2, and strikers who love to find the back of net.

Shearer and Sheringham, Shearer and Sutton, Cole and Yorke, Fowler and Owen, Quinn and Phillips, Gudjohnson and Hasselbaink. The list goes on.

These deadly strike partnerships, amongst others, have scored hundreds of goals between them, making the Premier League one of the most exciting leagues in the world for over 20 years.

Today’s equivalent is without doubt the irresistible looking duo of Wayne Rooney and Robin Van Persie. The pair notched a combined total of 57 league goals last season alone, and the Dutchman’s arrival in Manchester has left many mouths watering over the prospect of goals galore from two of the biggest superstars of the modern game.

However, the difference between the current footballing climate to the days of Shearer and Co is that many have questioned whether Rooney and Van Persie are able to play together, whether they are too similar and would both of their egos clash on the pitch?

When both have graced the hallowed turf together so far, the prospect of the deadly duo playing as far forward as each other wasn’t given as much as a second thought, because that would just be silly wouldn’t it?

To accommodate for the pair, Alex Ferguson has instructed Wayne Rooney to adapt his game to the modern philosophy, dropping deeper into a creative attacking midfielder role, allowing Van Persie to lead the line, alone.

Last week we saw two other adaptations of roles, with very diverse results.

Jonjo Shelvey was the man charged with leading the line for Liverpool in their Europa League clash with Young Boys at Anfield; a position is his far from familiar with.

Yet along with Joe Cole and other attack-minded midfielders Shelvey created plenty of chances, getting on the scoresheet in the process, and the team display was deemed impressive, despite a disappointing result.

The reaction to Di Matteo’s tactical switch was not quite as positive. Granted it was a crucial encounter in Turin to gamble with an unproven system, but with the players he had at his disposal, against a beatable Juventus side, you can see why the beleaguered Italian attempted such a move.

The difference between the system that Rodgers employed and what the now former Chelsea manager also utilised on paper are identical, but the way they were perceived couldn’t have been any different.

Di Matteo’s decision looked like it was rushed, that he knew his job was in jeopardy, and he had to come up with a plan that would produce a result that may keep him in employment.

The bold move to rely on their wealth of attacking midfield talent did backfire, with the 3-0 defeat being the final nail in the Italian’s coffin.

Yet if one of the first half chances had gone in for the Blues, and they could have defended as a unit, things could have been all so different, and the tactical change dubbed a masterstroke.

Instead, with Fernando Torres having to be brought on to try and turn things around, and adopting this formation made Di Matteo look almost clueless, and encouraged the doubters of his tactical prowess to be more vociferous.

But, was he simply  guilty of trying something new, to stop the rot, taking English teams forward into a modern philosophy that has seen such success abroad?

Brendan Rodgers’ however is a visionary of the modern era in many peoples’ eyes. His brand of football that he has brought to Anfield from his successful Swansea reign has been deemed by many as revolutionary, and the style of football pleasing to the eye.

Yet, to draw at home to a Swiss side who lie sixth in their domestic league, is hardly an impressive result, and Liverpool side’s of old would have been ridiculed to high heaven after this kind of outcome.

However, Rodgers came to Liverpool to start a project, which automatically gives him more time than most. Di Matteo never uttered such words, and therefore as soon as he strayed from the norm, then questions were immediately asked.

The Italian was not blessed with a hierarchy possessing such a relaxed attitude. His formation change gave him the persona of a desperate man, ultimately leading to his somewhat undeserved dismissal.

In football, especially in this country, change is not always seen as a good thing, especially if results aren’t achieved instantaneously.

Di Matteo’s decision to start without a recognised striker backfired on the night, but ultimately allowed Roman Abramovich to use the fan favourite as a scapegoat for Chelsea’s pending Champions League exit.

Yet on Merseyside, Brendan Rodgers could sit back, and sport a wry smile, as he watched the Di Matteo’s downfall, as he knows, he can get away with alot more, thanks to his ‘long-term’ plan.