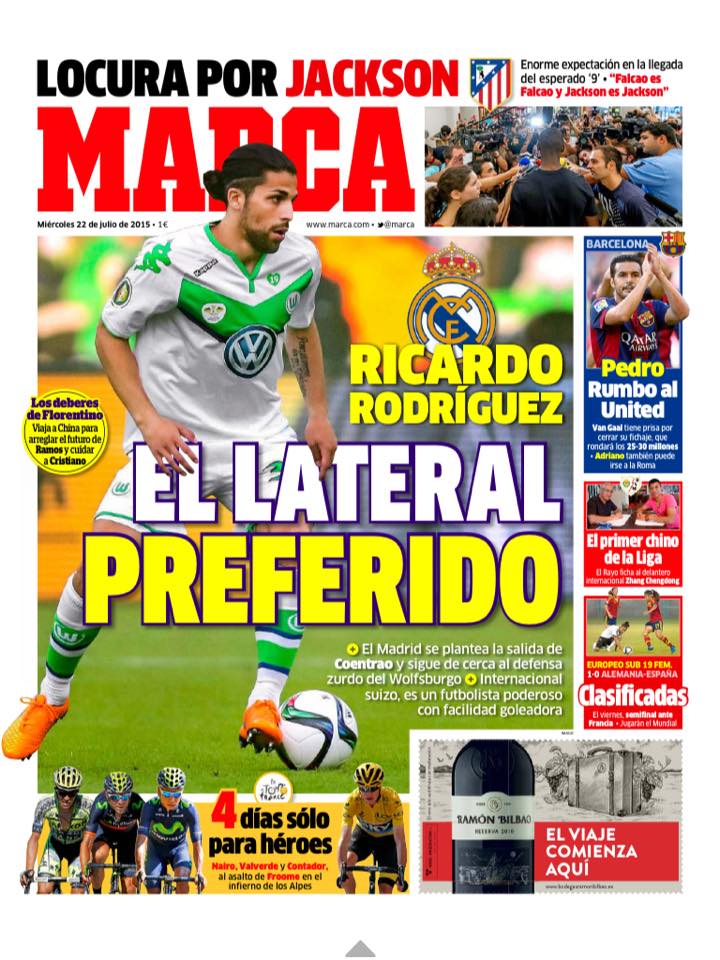 Real Madrid are looking to sign Wolfsburg’s highly rated left-back Ricardo Rodriguez, and get rid of Fabio Coentrao in the process, according to reports from Marca.

It seems like the days of Coentrao at Real Madrid are as good as over. The Portuguese defender, previously linked with Manchester United, hasn’t been performing at any acceptable level at Madrid for the past couple of years. He tends to get injured too often, as a result, Madrid are looking for options elsewhere.

With Coentrao set to be pushed out this summer, Real hope to tie up a deal for Rodriguez to offer competition to Marcelo at left-back. #RMFC

Marca have a front page report on this issue, where they claim that Madrid want to sign Wolfsburg’s highly promising left-back Ricardo Rodriguez in the summer.

Rodriguez is a young talented defender. He is only 22. He can easily accept the second choice role behind Marcelo. This will allow him to settle down at a new club and develop gradually. Rodriguez is dependable at the back and equally good at going forward. He is an attacking minded full-back, and loves to join the attack at every possible opportunity.

Rodriguez has a penchant for scoring goals, which is a good habit for a full back, something that Madrid fans will appreciate. Last season he scored nine goals in all competitions for the Bundesliga side.

But his main strength lies in intelligent passing, sharp dribbling and excellent deliveries from the flanks. Rafael Benitez usually likes his defenders to stay rooted in their zone, therefore prima facie, it may seem that Rodriguez is not his type-of-defender, but the Swiss international with more physical presence, could bring a different style in the Madrid set up.

The only hindrance lies in luring him away from the Bundesliga club. Wolfsburg are a financially well run club and they do not need to sell any of their stars at the moment. It is highly likely they may not even entertain offers for the Swiss defender at all from the interested parties.

Should Real Madrid step up their interest in signing Rodriguez? Will Coentrao be sold in the summer? Have your say below..