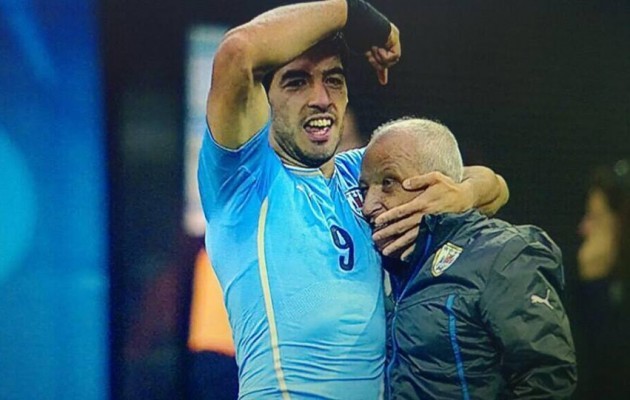 England suffered a 2-1 defeat against Uruguay in the Group D fixture of the 2014 FIFA World Cup on Thursday.

Liverpool superstar Luis Suarez’s double for Uruguay has put England’s chance of progressing to the next stages of the 2014 World Cup in danger. The 27-year-old picked up a knee injury last month during the training and was doubtful to make his side’s crucial fixture against the Three Lions.

Suarez went under the knife last month and recovered to make it to Uruguay’s second group stage fixture after missing their opening defeat against Costa Rica. The former Ajax man headed the ball into the corner and went ahead to celebrate with his side’s physiotherapist.

Last season’s Premier League top scorer was the star player for his side as his brace was the difference at the end between the two nations.

According to Diariouno.com, Uruguay physiotherapist Walter Ferreira played a key role in Suarez’s road to recovery. Ferreira is battling cancer and was set to undergo treatment prior to Uruguay’s fixture against England.

However, Ferreira cancelled his treatment in order to help Suarez regain full fitness and be fit enough to help his side go far in the World Cup in Brazil. Liverpool striker went and hugged Uruguay physiotherapist after heading the first goal and was very emotional after the final whistle.

Ferreira, however has thanks Uruguay to allow Suarez get treatment under his guidance.

“The truth is that I am grateful, I am grateful that the coaching staff had the confidence to send Luis to work with me without any project, I could not go to the resort and he went to work in my house, that I appreciate so much,” Ferreira said.

“The energy you put it, the lady and my family, I am a grateful heart and whom I have to really thank the doctors treating me, no I will never forget.”

If not for Ferreira, it could have hampered Suarez’s progress in recovering from the knee injury and also improving Uruguay’s chances of making it to the Round of 16. The sacrifice done by the physiotherapist has finally paid dividends are his nation finally managed to seal a win in the crucial fixture.

It is still confirmed that Uruguay will progress to the Round of 16. They have three points and share same points as that of Italy and Costa Rica, who face each other in Group D clash on Friday.

A victory of either side would see Uruguay register a win to improve their chances of making it to the later stages of the World Cup.