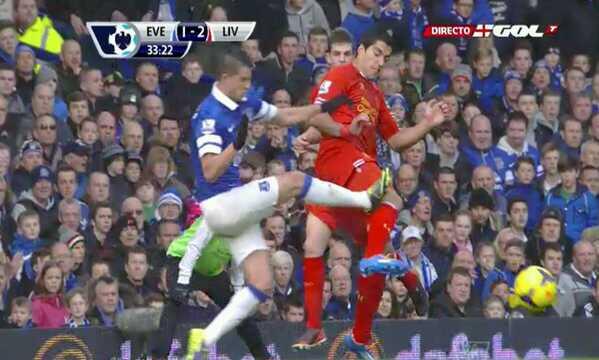 Despite scoring a goal in the Merseyside derby, Belgian star Kevin Mirallas has become the centre of talking point for his rash tackle on Luis Suarez that should have been all but a sent-off offence.

Referee Phil Dowd was very generous about it and cautioned him with only a yellow card. Liverpool manager Brendan Rodgers was also convinced that Mirallas deserved Red and added “and I wonder what the ref had decided when Suarez had made the tackle. I know Kevin as an honest player, but his challenge is inexcusable. He kicked him in the back of the knee and something can mean the end of a career.”

Belgian newspaper Sportwereld says Mirallas should be extremely happy for mainly three reasons. First, he scored his first goal of the season, secondly, he provided the assist for Romelu Lukaku’s goal and thirdly, he escaped a red card after his rash challenge on Suarez, hitting him below his knees.

Mirallas says as quoted in the newspaper –“It is normal that the Liverpool supporters felt that I deserved red,”

“I thought I played the ball, but at the last moment, he put his thigh. In derbies are always such contacts. Last season Suarez has two players injured, including myself. I was two weeks out. “

Sportwereld says that from his words, it is clear that Mirallas was out for the revenge. We would like to think it as an accident with no malicious intent in it, certainly not done with an intention of revenge in mind. Keeping aside all the controversy, one must admit that the latest edition of Merseyside derby was arguably the best match of the season so far.