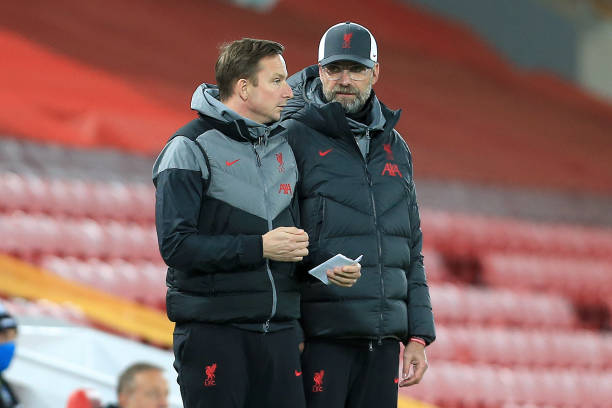 According to Sunday World, Liverpool assistant manager Pep Lijnders is manager Jurgen Klopp’s choice to replace him at Anfield when the time is right.

While former skipper and Rangers manager Steven Gerrard is the ‘romantic choice’ to take over from the German, it appears that the Reds boss has other ideas.

Gerrard will surely want to manage Liverpool one day, but he might have to wait a little while longer if Klopp gets his wish.

The 43-year-old has three years left on his current deal at Ibrox, and Klopp’s contract also expires at the same time.

The Liverpool boss was linked with exit rumours a couple of days ago after his side fell to a third straight Premier League defeat, but he has since poured cold water on them.

He could remain at Anfield until 2024 or beyond, and the club will be hoping to land the perfect replacement when the time comes.

Lijnders already knows the club and the players well, and the 38-year-old would likely hit the ground running if he takes over.

However, Liverpool could be looking at a big name and a more experienced manager once Klopp leaves.

That would surely leave Gerrard disappointed, but as his former teammate turned pundit Jamie Carragher pointed out, the Light Blues boss needs to gain enough experience in management before taking up the Liverpool job.

He is in his third season as Rangers manager and he has been impressing after his side finished the last two seasons behind bitter rivals Celtic.

He has since led them to the top of the Scottish Premiership table following an outstanding start to 2020-21, with 18 points currently between them and second-placed Hoops.

Gerrard’s first piece of silverware as a manager is just around the corner, and he may fancy testing himself in the Premier League.

In other news, Manchester United are plotting summer move for centre-back Liverpool submitted official bid for in January.