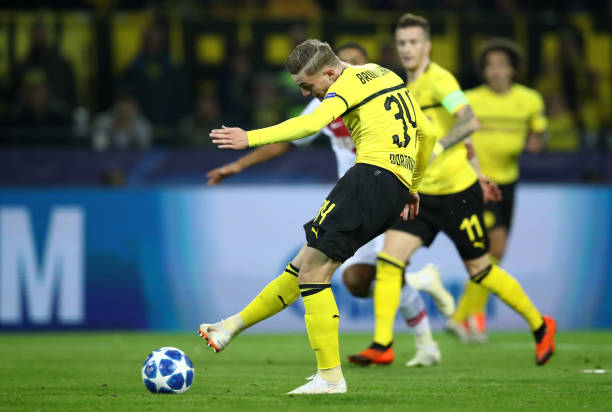 According to The Sun, Liverpool are keen on Borussia Dortmund winger Jacob Bruun Larsen, and could make a summer move for the youngster fours years after Everton’s failed pursuit.

The Bundesliga giants pipped the Goodison Park outfit and several others to the race of the 20-year-old in 2015, and he has steadily improved since arriving at the club from Danish club Lyngby Boldklub.

Larsen scored thrice and assisted thrice in 30 appearances across all competitions last term, and Reds boss Jurgen Klopp could be set to raid his old club.

The German was Dortmund’s manager when the Denmark youth international, who made his international senior debut in March, was signed up, but he faces Manchester United, Arsenal and some other big European clubs in the race for his signature.

Liverpool are keen to add quality depth to their squad this summer as they look to retain the Champions League and also challenge Manchester City for the Premier League next season, and Larsen fits the bill.

The Dane can be a long-term option and a perfect cover for the left wing given the lack of quality depth in the position, and securing his signature after Everton failed to four years ago would be a huge blow on the Blues, especially if he turns out good.