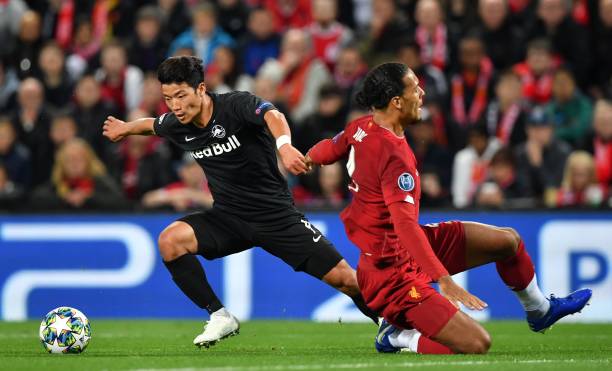 According to The Athletic, Everton have tracked Red Bull Salzburg forward Hwang Hee-chan closely but do not plan to bid for him this month.

Leicester City are also interested in the South Korean, but it is Wolverhampton Wanderers that are looking to seal a £27 million deal for him this month.

Brighton are also keen on a January move for Hwang, but Salzburg prefer to let him go at the end of the season having already sold Takumi Minamino to Liverpool and Erling Haaland to Borussia Dortmund this winter.

The 23-year-old destroyed Liverpool centre-back Virgil Van Dijk to score Salzburg’s first goal during their 4-3 Champions League loss at Anfield, and Everton could do with such a quality forward this month.

For a side struggling to be prolific, landing Hwang, who has nine goals and three assists across all competitions this term, will definitely help provide their attack with much-needed boost, but it seems Wolves are more eager and they could end up beating the Toffees to his signature.

Nuno Espirito Santo’s side could seal a deal to sign Hwang this month before sending him back to Salzburg on loan for the remainder of the season in order to secure his services before wealthier clubs become involved in the summer.

The South Korea international has his mind set on moving to the English top-flight, and he brings pace, width and goals to the table.

This is the type of deal Everton should be sealing this month if they are serious about finishing in top six and establishing themselves as a top team going forward.