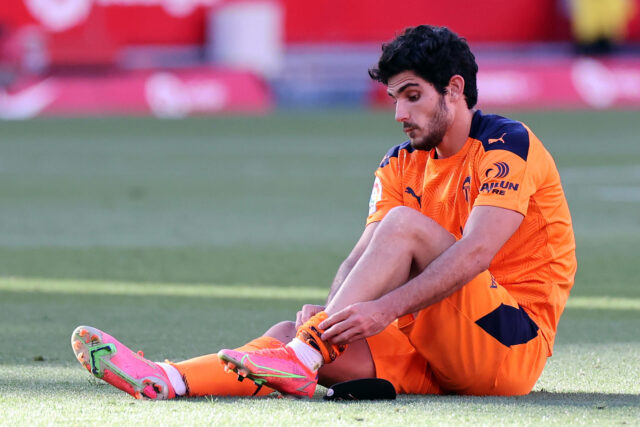 According to reports from sports station Plaza Radio report via Plaza Deportiva, Everton are keen to land the Portuguese this summer.

The Toffees will be boosted by the fact that Los Che are also keen to offload him, with the La Liga club saddled with over €200 million (£173m) debt.

However, Everton are not the only Premier League club that have registered an interest in the 24-year-old attacker.

Recently, La Razon claimed that Wolverhampton Wanderers are also keen on signing Guedes, with Valencia demanding a fee of around €40m (£34.6m) for the player.

However, Wolves are struggling financially, and they need to sell some of their big players to fund moves for potential new arrivals.

Guedes has impressed this season, bagging five goals and five assists in 31 appearances in La Liga.

The 2020-21 season started brightly for the Toffees, but they finished 10th in the league behind Leeds United.

The Toffees need to spend big again this summer to bolster the squad, and signing an attacking midfielder should be one of their top priorities.

The majority of Everton’s goals have come from Dominic Calvert-Lewin and Richarlison, and more productivity is needed from wide areas.

Guedes would be a superb addition for the Toffees, and the club should make a concrete effort to lower the asking price and get the deal done at the earliest.