Talking points were a given following what was undoubtedly the round of the 2012-13 Serie A season to date.

Napoli (2nd) found themselves six points behind rivals Juventus (1st) prior to their clash on Friday, while AC Milan (4th) knew that victory over Lazio (3rd) would incredibly propel them back into the top three for the first time in a long time.

It was shaping up to be a cracking round of football, however what eventuated was completely unexpected.

Instead of Cavani, El Shaarawy and Pirlo grabbing the weekend headlines, it was left to Daniele Orsato and Nicola Rizzoli – yes, the two referees from the two headline fixtures.

So, it all started on Friday. In front of a hostile crowd in Naples, the hosts were fully aware that a win would certainly reinvigorate the title race, and cut the Bianconeri’s lead down to just three points. The match finished 1-1, with Giorgio Chiellini’s opener cancelled out by Gokhan Inler.

Despite never trailing in the contest, Juve were certainly the more relieved of the two sides when the final whistle blew. Not because of the statistics in their opponents favour, however more so because Napoli star Edinson Cavani deserved to see red on the stroke of half time, when he lashed out at Chiellini with an elbow to the face. 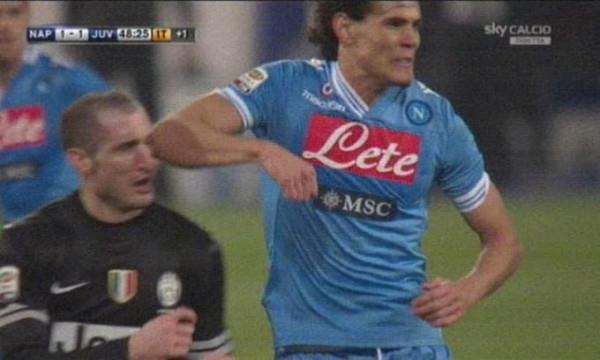 Cavani is the competition’s top scorer, and despite having failed to score in eight matches, always poses a threat to the opposition goal. On any other night, the hitman surely would have seen red, however Orsato’s leniency proved to be the difference here.

Imagine the damage done had Cavani scored, and reopened the title race at the San Paolo on Friday. Imagine the damage that the striker can still do now, knowing that he won’t have to sit out the next three fixtures!

There is no place for mistakes as crucial as this in our game, particularly as the poor decision could play a serious role in deciding the Scudetto this season.

Just when we thought the weekend’s refereeing couldn’t get any worse, it did! Enter Rizzoli, one of the nation’s most experienced officials, yet still very open to a poor decision, or two in this particular case.

The Rossoneri were aiming to return into genuine contention for Champions League qualification next season, as victory would ensure third place. Fortunately for their sake, the result went in their favour 3-0, against a 10-man Aquile side – thanks to a Pazzini double. 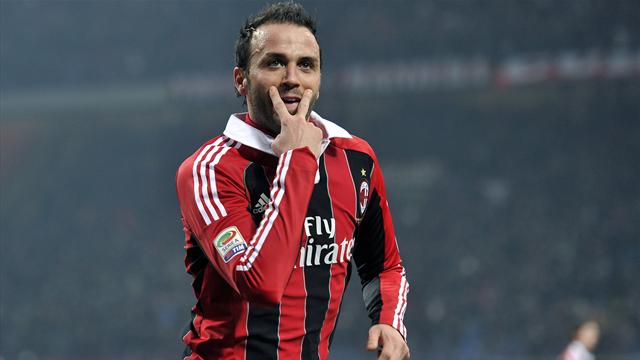 Antonio Candreva was incredibly shown a red card on 17 minutes – a decision that yet again highlighted the inconsistent officiating we have seen over the course of the 2012-13 season. Additionally, the home side were somehow not awarded a penalty from the challenge that saw the Italian international sent from the field.

Rizzoli deemed that Candreva was the last man in a challenge on El Shaawary; therefore denying the young striker a clear goal scoring opportunity. This would have been the correct decision, had team-mate Andre Dias not also been in a clear position to make a challenge on the hitman, as he did.

What made the referee’s decision even more baffling, was the fact that the challenge was clearly made in the penalty area, therefore denying the Rossoneri a clear penalty in the early stages.

While Milan deservedly won the contest, we will never know what would have taken place had Candreva remained on the pitch, and the hosts been awarded a penalty. Again, at this crucial stage of the season, these errors are simply unacceptable.

Elsewhere in Italy this weekend, Torino continued Palermo’s torrid run of form, as the Rosanero slumped to yet another defeat under the recently appointed Gian Piero Gasperini – for the second time this season.

Sampdoria and Fiorentina recorded narrow victories over Parma and Chievo respectively, while Alessandro Diamanti scored a goal of the season contender, as Bologna thrashed Cagliari 3-0.

Relegation battlers Pescara and Siena failed to make the most of their home advantage, as both failed to offer any resistance in defeats to Udinese and Atalanta. Serie B football looks to be a near certainty for the pair next season.

In the final game of the round, Francesco Totti inspired Roma to a crucial 3-1 victory over Genoa at the Stadio Olimpico, with the talisman opening the scoring – his 225th goal. The strike incredibly takes the No. 10 to equal second on the all-time goal scorer’s list in Italy.