The front page of the Spanish newspaper, Marca, reads: Operacion De Gea 2. Real Madrid are reportedly preparing a fresh move to bring the Manchester United goalkeeper to the Bernabeu. The operation is already underway, and the club have opened discussions over the signing of the 26-year-old next summer. 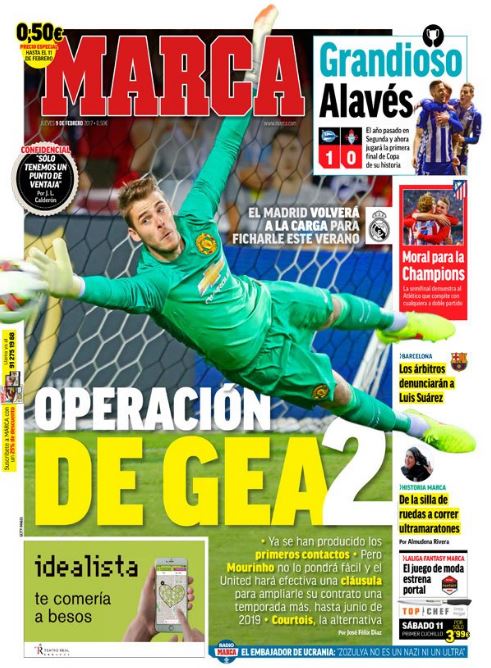 Madrid boss, Zinedine Zidane, is more than satisfied with Navas, but he will still gladly welcome a new addition to the squad. The need for a new goalkeeper is frequently being discussed, and the name that always comes to the fore in club meetings is de Gea. They feel that the Manchester United goalkeeper is perfect for Madrid.

Madrid are well aware that luring de Gea from United won’t be an easy task, even if the Red Devils fail to qualify for the Champions League next season. The only option the La Liga club have is to meet his release clause. And Madrid are willing to tread that route.

De Gea is enjoying his prime form at the moment, and Madrid want him to represent the European champions for years to come. He has been United’s best player in the past two seasons, and the defenders always feel secure with him at the back. Madrid want a similar sort of security with de Gea operating behind the defensive line.

So, how much will Madrid have to pay? €65m only. Jose Mourinho, the United manager doesn’t want to lose a player of de Gea’s calibre. And he won’t make it easy for his former club if Madrid comes up with an offer. He has a contract at United until 2019, while The Red Devils would be able to extend that for a further season.

Manchester United fans adore de Gea. The Spaniard feels important at United, and has the full backing of his manager. Furthermore, he enjoys the company of Spanish players at United like Juan Mata and Ander Herrera.

Having said that, it is hard to refuse an offer from Real Madrid. He knows that the operation is already underway, and the lure of returning to Spain is something he might consider next summer.