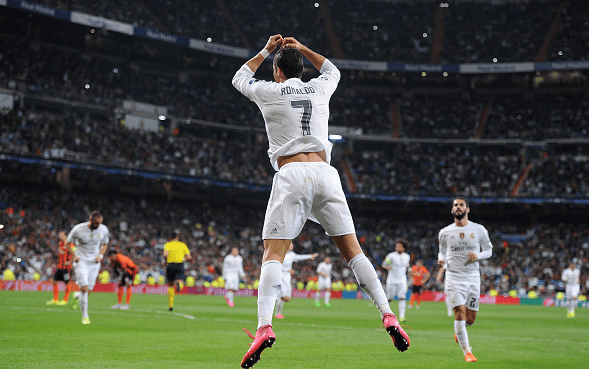 Real Madrid eased their way to a 4-0 win at home against Shakhtar, in their opening game of the Champions League this season.

Rafa Benitez’ side looked in cruise control as the Ukrainians were brushed aside, thanks to a splendid hattrick from Cristiano Ronaldo and a goal from Karim Benzema.

Ronaldo bagged his second hattrick in four days and took his tally to eight goals this season with a well taken hattrick at the Bernabeu. The Portuguese superstar scored twice from the spot and headed in a rebound to complete the rout.

Benzema handed Real Madrid the lead, after a misunderstanding between Pyatov and Rakitskiy. The French man took advantage of the error and slotted home from close range.

Real Madrid’s win tonight takes them to the top of their group. Los Blancos will be happy with their impressive start to the season, winning 3 of their last 4 games and racking up 4 clean sheets in the process.

Meanwhile, Cristiano Ronaldo now has the most number of hat-tricks for a Spanish club ever with 33 and is closing in on Raul’s record of scoring the most goals for Real Madrid in all competitions.

Without further delay, here are the goals and highlights from Real Madrid vs Shakhtar.

Here is how Twitter reacted to their win and Ronaldo’s hat-trick.

Ronaldo has scored 8 goals in two games. Best striker in the world. If he let’s others grow around him, RM will compete for everything

Hang on, Jeff Stelling just said on SKY that Ronaldo now has 33 (THIRTY THREE!!) Hat-tricks for Real and 4 in his last 6 games. Ridiculous!

Real Madrid starts a season without goals against in his first 4 games, for the first time in its 113-year history [@2010MisterChip]. — SocialRMadrid (@SocialRMadrid) September 15, 2015