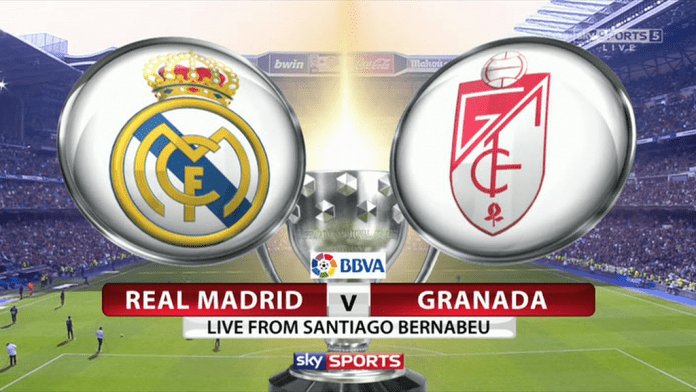 Real Madrid head into this week’s match against Granada with immense confidence, after two thumping wins against Espanyol and Shakhtar.

The Los Blancos have demolished their opposition in the Liga as well as the Champions League, scoring ten goals without reply.

After a short lived goal drought, Real Madrid star Cristiano Ronaldo has been unplayable, scoring eight times in his last two games. The Portuguese forward is also heading into the Granada game, with an incredible record in his sights.

Ronaldo is two goals behind Raul’s tally of 323 goals for Real Madrid. The Real Madrid talisman will be aiming for another hattrick, which will make him the highest scorer in Real Madrid’s entire history, an incredible feat which will be achieved in a record number of games.

Granada will remember their crushing 9-1 defeat to Real Madrid last season and will be hoping to contain the unplayable Cristiano Ronaldo, who scored five times against them in a single game last season.

Real Madrid will be without the services of Danilo, James Rodriguez, Gareth Bale and Sergio Ramos. Bale is set to miss the game with a calf strain and Captain Sergio Ramos is out with a dislocated shoulder.

Meanwhile, Granada will be without midfielder, Ruben Perez, who is set to be replaced with Fran Rico. Perez is set to be out for the next few weeks with a knee injury he picked up against Villarreal.

Real Madrid have only lost one of their previous 21 home league games against Granada, winning 18 and drawing two.

Los Blancos have won 27 and drawn one of their last 28 home league matches against sides from Andalusia.

Granada have won all three away league games under Sandoval; their best run on the road in top-flight history.