Real Madrid are looking to sign AS Monaco star Radamel Falcao on a season-long loan in the ongoing transfer window.

The Colombian international has been a success in the La Liga while he was a key player for Real’s local rivals, Atletico Madrid. The 28-year-old left the Spanish capital club and signed for the Ligue 1 side last summer.

However, a massive injury has seen Falcao spend most part of his debut season for Monaco on the sidelines. Now the report from Spanish newspaper AS suggests that Real are planning to sign the South American hotshot on-loan for €12.5m, with an option to make the deal permanent next summer for €33m. 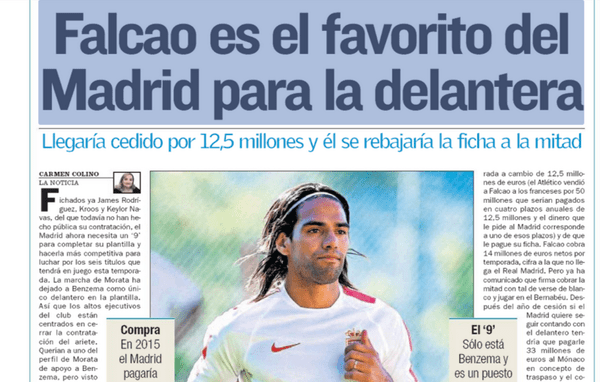 Spain U21 international Álvaro Morata recently joined Juventus, leaving Carlo Ancelotti with Karim Benzema as the only recognised striker in the squad. An injury to the French international could put a dent on Real’s hope of winning silverware.

Real signed James Rodriguez and the World Cup sensation is represented by super agent Jorge Mendes, who is also the agent for Falcao. The striker is keen on making a switch to the Santiago Bernabéu Stadium.

The former Porto man earns €14m at Monaco, something that cannot be offered to him if he joins the Champions League winners. Falcao is willing to join Real and is ready to pay cut to join Real.

The French side earlier admitted they want to keep Falcao and Rodriguez at the club. However, the latter signed for Real and his compatriot could soon follow him away from Monaco.

Should Ancelotti’s side sign Falcao, they will be one of the force to reckon with the next season. Real have already added Toni Kroos and Rodriguez to their squad and the addition of the former Atletico star will only improve their squad.

A loan move for Falcao would be ideal as he has not played top flight football for a very long time. Based on his performance, Real could evaluate if they can sign him on a permanent transfer next season.