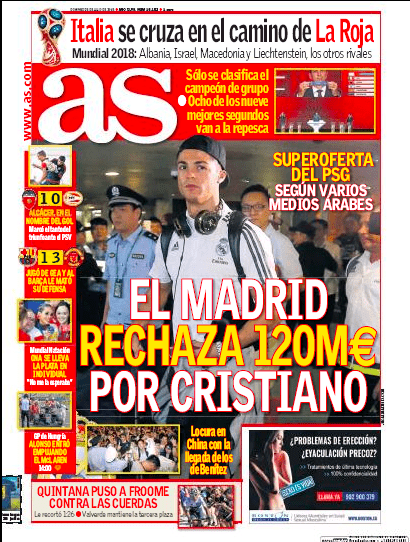 Real Madrid have rejected a massive €120m bid for Cristiano Ronaldo, according to reports in Spain. Wow!

Spanish newspaper AS, citing reports from Arab sources, claims that Real Madrid had received a €120m bid for Ronaldo from French giants Paris Saint Germain, which was rejected immediately.

Needless to say, Real Madrid have no intentions to sell the three-times-Ballond’Or winner at this moment. Florentino Perez met with PSG officials in Doha on July 4, when he relayed that Ronaldo would not be sold at any price.

Recently, Manchester Evening News, published a report (not for the first time, but certainly first time of this summer transfer window) where they claimed Manchester United (not again!) are planning to bring back Cristiano Ronaldo.

We all know that’s never going to happen, but hey, why let facts get in the way of a good narrative? Even the sheer thought of Ronaldo coming back to Old Trafford gives a good feeling. Isn’t it? Meanwhile, Perez hopes to keep hold of Sergio Ramos, while he will try one last time to sign De Gea (that’s what Marca thinks). Perez took flight to China to convince Ramos to sign a new deal. Great personal tough!