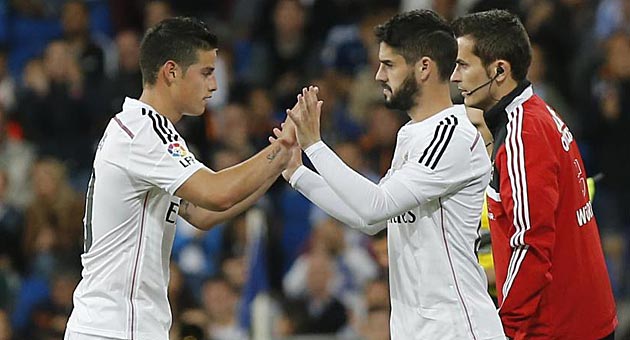 Real Madrid are looking to revamp their squad next summer and few high profile names could be sold in order to fund move for new arrivals.

According to reports from Spanish newspaper AS, Los Blancos are reportedly planning to prepare life without two of their star players – Isco and James Rodriguez. Madrid will listen to offers for them, and if the offers are really good enough, the players could be sold as well.

Florentino Perez, the Madrid president is reportedly unhappy with the performance of both Isco and James, and their form haven’t improved with the arrival of Zidane.

James is highly rated at Madrid and his case might be considered with a different view. He was injured in early September, didn’t have a good pre-season and had a frosty relationship with Rafael Benitez. He has asked for a wage increment in only in his second season at the club, and it has irked Real Madrid hierarchy especially his performance has been below par, to say the least.

The Colombian would cost around €80m, and several Premier League clubs have had already registered their interest in signing him including the likes of Chelsea, Manchester United and Manchester City.

Isco’s case is slightly different. Madrid are not at all happy with his performance and they believe the player is lacking in confidence. Isco joined the club in 2013 after enjoying a great performance with the Spain U-21 side in the Euros, but has failed to live up to his potential.

There is a feeling among the fans that Isco is a lazy player and doesn’t apply too much on the pitch.

Isco is a highly talented player. He is elegant, and skilful but fails to fulfil his potential. He probably doesn’t work hard enough, and make the best use of the time he gets on the pitch. A reason why he doesn’t score and assist enough.

May be, Isco is not good enough for Real Madrid. Consistency is a demon that is impeding him from becoming a great player. And Madrid cannot afford to play an inconsistent player week in week out. He gets frustrated so easily, and hasn’t reached the level he should be at. Arsenal are frequently linked with a move for the Spaniard, but doubts remain whether he would be an ideal fit for the Gunners.