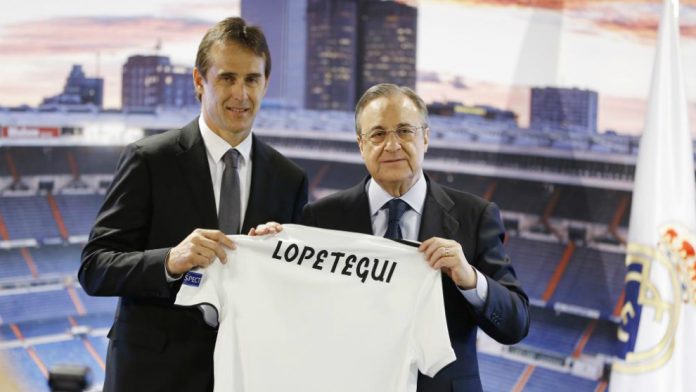 Real Madrid president Florentino Perez has revealed that the Spanish club announced Julen Lopetegui’s appointment before the start of the World Cup to avoid the news from being leaked during the tournament.

After almost two years in-charge of the national side, Lopetegui was shockingly sacked by Spanish Football Federation (RFEF) on Wednesday since few Spanish officials were left furious by Real Madrid’s handling to announce Lopetegui’s appointment as the new club manager.

But Florentino Perez, the Real Madrid president, has now insisted that the Los Blancos were simply trying to avoid any potential speculations during the World Cup finals in Russia.

“You must be feeling contradictory feelings, you had two dreams, to win the World Cup and coach Real Madrid, two dreams which were perfectly compatible,” said Perez.

“We wanted to make this agreement quickly, before the World Cup, to make it transparent and avoid any speculation and rumours.”

Lopetegui was officially presented by Real Madrid during a press conference on Thursday and the 51-year-old has stated that his recent sacking from the national team was one of the saddest days of his life.

“Yesterday was, after the death of my mother, possibly the saddest day of my life, but today is the happiest,” Lopetegui revealed.

“This is an emotional day, thank you president (Florentino Perez), thank you Real Madrid, for your trust in me and this responsibility I take a lot of pride.”

The Spaniard replaces club legend Zinadine Zidane, who stepped down from his position last month after leading the Los Blancos to their third consecutive Champions League trophy.